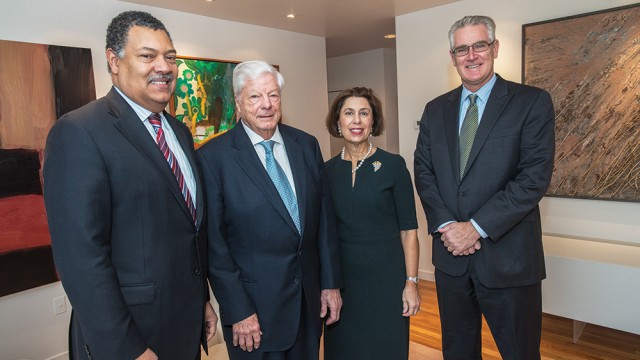 The Rappaport Center for Law and Public Policy, previously at Suffolk University, is moving to the Boston College Law School, the result of a $7.53 million endowment gifted to the school by the Phyllis & Jerome Lyle Rappaport Foundation.

The Foundation partners with various institutions in Boston, including BC, Harvard University, and Massachusetts General Hospital, in order to further its goals of creating productive dialogue and policy on the local and state levels of government. At BC, the Center will house the Rappaport Fellows Program, which consists of paid fellowships for top law students at one of the six law schools around the city: BC, Boston University, Harvard University, New England School of Law, Suffolk University, and Northeastern University.  The 12 fellows are typically picked from a pool of around 100 or more applicants.

In addition to this fellowship program, the Center will host a visiting professor each year who will be paid for with the endowment from the Rappaport Foundation. The Center will also hold roundtables and political debates in order to promote the discussion of important issues of law and public policy in the greater Boston area, said BC Law Dean Vincent Rougeau.

Michael Cassidy, a professor in the Law School, will be the faculty director of the Rappaport Center. He is in charge of generating ideas for conferences and new initiatives. He will supervise an executive assistant and an administrative assistant. The Center plans create a physical and intellectual space for public policy and government leaders to solve problems and work together, Cassidy said.

“I think the Center will tie BC more closely to the major public policy issues facing Boston and Massachusetts,” he said. “This is a great opportunity for our students and faculty to work on an interdisciplinary basis with government leaders to tackle some of the most pressing issues facing our state.”

Although the Foundation provides an endowment, it is the duty of the university that hosts the Center to provide the rest of the funding. At this point, Suffolk University no longer feels that they can afford that. This fall, BC prepared a proposal to offer their ideas for the program. The advisory board of the Rappaport Foundation reviewed proposals from several schools and chose BC, Rougeau said.

“We felt very strongly that the Rappaport Center’s mission and its goals really meshed well with who we are at BC Law,” he said. “We take very seriously at BC Law the idea that we get students to be leaders, to be men and women for others. What the Rappaport Foundation is trying to do is very similar: they are trying to nurture leaders for greater Boston.”

BC Law aims to nurture member of the legal profession who are thinking about larger ideas. Rougeau hopes that the Center will attract more students who will hear about programming connected to the University.

Despite the current financial standing, the Center was successful at Suffolk. It created a strong brand among law firms and offices. BC, however, is ready to make the program even more successful, Phyllis Rappaport said.

“I think Boston College is very well posed to bring the center to new heights,” she said.

Since the 1980s, Phyllis and Jerry Rappaport have been giving scholarships to the Harvard Kennedy School. In 1997, the Rappaport’s created the foundation in order to facilitate a connection between academics and state and local governments. Eventually, they decided to create a separate program just for law students, the Rappaport Center. The Center works to accomplish common goals with the Rappaport Institute for Greater Boston at Harvard University.

“Boston College Law School has always had a big role in the political leadership within the city: so many of its grads have gone on and served the important public policy positions,” said Jerry Rappaport, who graduated from Harvard in 1949. “This made BC a logical choice and a wonderful partner for Harvard in terms of their common goal.”

The Center has been critical in recognizing the capability young lawyers have in changing public policy, according to Jerry, and in acknowledging that they have the ability to be an active participant in this change.

“I have the feeling so often that young people feel that they are impotent to change public policy and to some extent that they are a victim of public policy,” Rappaport said. “I think serving in important public policy positions with the officials who are at the center of the political process and political power gives them a chance to understand it and to recognize that they can be effective in it.”

Featured Image Courtesy of the Office of News and Public Affairs