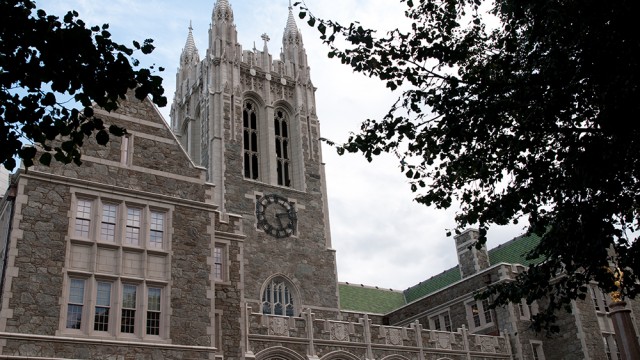 New Years Resolutions – It seems like a whole lot of hoopla for nothing, you think. Yes, the planet completed another revolution around a star. This gets people to stand in the frigid cold for 14 hours to watch a ball drop for 60 seconds. Curious. But we love New Years Resolutions. We love the very ignorance for a simple continuing of a concept we invented long ago. Ignorance for one night, anyway. It’s not that we believe that we will keep our resolutions—we know that we’ll break most—but it’s the idea that, through it all, it’s never too late to restart our engine.

College is Awesome – We are in awe of what we do every day. Wake up, and learn. Outside of a part-time job, we just learn. We spend whole days being lectured to in a classroom and sitting in a library (where things are, somehow, social). We devote four years to enriching the whole person. We get to read books and stuff. It’s a lot of work, sure. The best things are. Gasson rises stark against the horizon, and even with a biting wind in our face, we can’t help but feel an overwhelming thrill to be back.

Google – The Interview wasn’t all that good. But that doesn’t matter. What matters is that the moment we wanted to see it, we could. When things looked the most hopeless for the movie, Google strolled in. “We could not sit on the sidelines and allow a handful of people to determine the limits of free speech in another country,” Google said on its official blog, simultaneously releasing the film on Google Play and YouTube. Leave it to the company that reinvented the wheel to still look badass as ever.

The Plex at 4 PM – New Years Resolutions are so sweet until there’s an awkward twenty-minute wait for a treadmill.

Book Store Prices – No, we’re not buying. Wait, what? 50 bucks? To rent it? The thing has every word highlighted, and someone covered all of chapter seven in sharpie. Yeah, well fine. I’ll probably only need to read 20 pages of it, anyway.

Unoriginal Responses – We act our parts in a bizarre number of plays, and in more of which we are extras rather than leads. Yet, we are always the ones to pen the script of our roles, no matter how big or how small. This point seems to be the most forgotten. When someone says “How was your break?” our response is not dictated by the majority. We’re going to say something more wholesome and truthful than “Good,” because the very fact that we’re going to be six feet under soon means that there is no time for robotic answers.  Write your role.