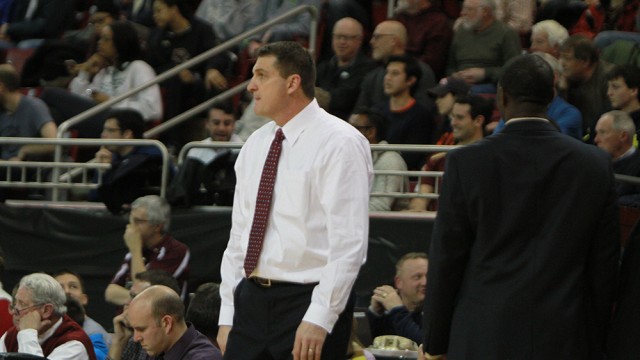 BC couldn’t get through the zone, or in it, against Syracuse on Tuesday night.

The last time Boston College men’s basketball left the Carrier Dome in Syracuse, New York, the team was still aglow with the magic of the night. The 6-19 Eagles, flailing on their longest losing streak of the season, took on the most powerful team in the ACC and the No. 1 team in the nation, and came out victorious. Their sophomore phenom led the way, dropping 20 points. It took an overtime period, but it was enough, and the Eagles took home a win.

This season things are a little bit different. Syracuse remains unranked this year. Although the team is 13-5 overall and currently fourth in the ACC, it is 0-2 against ranked teams, and hasn’t played one of the five ranked ACC squads yet this season.

The Eagles, meanwhile, picked up a new head coach, a win against Harvard for the first time in seven years, and three more wins than they had at this time last season. BC also came in fresh from one of its best games of the season against No. 2 Virginia, which only pulled away in the latter part of the second half. For a short stretch, optimism returned.

In the first edition of BC-Syracuse this season, however, the Eagles were tripped up again. After taking an early lead, BC could do little right on either end of the court. A late comeback in the final two minutes of the game made things interesting, but the Orange came away as the better team, wrapping up the contest with a 69-61 win.

For the first five minutes of the game, BC was almost still playing like a good team. On the defensive end, it certainly was—BC coach Jim Christian had his team use a series of double-teams and switches to keep the ball away from Syracuse’s six-foot-nine leading scorer, Rakeem Christmas. It actually took Syracuse almost five minutes to hit its first field goal, going 0-6 until Christmas knocked down a jumper.

On the other end, BC’s senior transfers shined. Aaron Brown and Dimitri Batten combined to go 4-6 from beyond the arc, launching BC out to a quick 12-4 lead.

Anyone who has watched BC this season, however, has heard this story before. While the team can have spurts of success in long-range shooting, a sudden cooldown is inevitable. In Tuesday night’s game, that came just over five minutes into the half, when BC began a nine-minute stretch that included seven missed jumpers, one missed layup, and four turnovers. The only positive result: a made free throw by Patrick Heckmann.

In that same time, the Orange put up 18 points, which included four layups and a dunk. They would never relinquish the lead.

After such an abysmal first half, it’s a wonder how BC could have ever hung with a ranked team, let alone the number two team in the country. The best answer? Try Syracuse’s zone. The Orange began the game using it and rarely varied, and it wasn’t until the second half that BC found ways to penetrate it.

In the first half, however, the Eagles had no answer other than to shuttle the ball around the perimeter and pray that someone else would make a play. No one did.

Instead, BC would shoot 10 threes before the team even attempted a single 2-point field goal. No one made a two until Brown dropped a jumper 14 minutes into the game, and BC’s first successful shot at the hoop didn’t come until two minutes into the second half.

Even though Syracuse’s zone was a good one, BC had no excuse for playing this way. Against UVA, the Eagles rarely settled for 3-pointers, preferring to drive inside. Even though a good amount of their attempts weren’t successful, this opened up enough space for BC to find good looks from in front of the arc. After all, as Christian has emphasized already this season, the Eagles depend on this type of offense..

Individually, this zone most seriously affected BC’s top two leaders in offensive win shares: Dennis Clifford and Olivier Hanlan. Hanlan was held scoreless in the first half, completely failing to penetrate. He did hit a few 3-pointers of his own in the second half, but ultimately finished with an underwhelming 13 points on 5-of-14 shooting, certainly failing to surpass his 20-point performance last time at Carrier.

Clifford, who was locked in a battle with Christmas most of the game, proved to be almost a complete non-factor in the scoresheet. He attempted just one field goal, and finished with one point after going one-for-two at the line. He picked up just one rebound and one block, and fouled out with two minutes to go in the game—a direct result of guarding Christmas.

Christmas, though, fouled out just eight seconds after Clifford, adding some intrigue to an otherwise uneventful second half.

With both big men out of the picture, Syracuse faltered slightly, missing eight free throws and committing two turnovers. This prodded the Eagles into action—BC cut it as close six points—but they didn’t have the same magic on their side, chucking up threes that clanged off the rim instead of finding the center.

Like a good amount of the games BC has played and will play this season, this wasn’t one that necessarily should have been won. Syracuse has a talented basketball program, and at the moment, BC’s isn’t at the same level. But there are certain things that will drive Christian crazy. One of the biggest, perhaps, came in the waning seconds of the first half. Syracuse threw up a long, fadeaway 3-pointer at the shot clock buzzer. Instead of grabbing the rebound, the Eagles stood around and watched as Orange guard Trevor Cooney slipped through a hole, grabbed the ball, and laid it in, nearly uncontested, as time expired.

This wasn’t necessarily the difference, but it was something BC could control—and something it should do if it wants to rise from the cellar of the ACC. Christian also has to figure out how to consistently get his three guards—Hanlan, Brown, and Batten—to drive and create better shots for themselves and one another, or the shooting streaks will stay cold for as long as a New England winter.