Home » Learning To Live In The Middle Of Life
Opinions, Column

Learning To Live In The Middle Of Life

I remember one of the first times I saw a person who had no home.

It was third grade, and my class was on a fieldtrip in downtown Atlanta, a location that, unbeknownst to eight year-old me, had a large homeless population. When we walked in single file from where our bus parked to the museum, I saw a  group of people huddled together to keep warm as I was bundled in a coat and gloves. But I couldn’t stop and give them money or food— I couldn’t do anything. The chaperones kept us in a straight line, one after the other, and told us to keep our heads straight. We were shielded from this social injustice.

We live our lives every single day knowing that there is injustice in the world. Many other kids, just like I was, were shielded from it. Sure, we knew they were happening, but in the back of our minds, we thought, “Well, I’m just a kid. I can’t do anything about this. It’s the adults that need to make a change.” We were granted the privilege of childhood.

Now we are the adults that need to make a change. But before we do that, we have a decision to make: What part of life are we going to live in?

Those with a biographical mindset tend to think on a more individualistic level. When they hear about a 35-year-old man who has been unemployed for six months, the first thing to pop into their minds is something along the lines of, “Is he too lazy to find a job? Did he choose to drop out of high school or not get a college education?”

Those with a historical mindset tend to think big-picture. When they hear about this same 35-year-old unemployed man, they first consider something along the lines of, “Was he born into poverty? Was he unable to get an education because of the systems holding him back?”

Viewing the world the first way is much simpler. It is easier on our consciences to not think about society’s structures and systems, and instead blame people’s hardships on their own decisions. It is the unemployed man’s decision to be unemployed. If he really worked hard enough, he could find a job. But, viewing the world this way is oftentimes limiting. Going through life oblivious of the bigger structures of society can leave one with a supposedly clear conscience, but it can oftentimes lead to insensitivity and leave one with an unwillingness to see the need for change, purely because their own mindset provides them with a shield from society’s fundamental problems.

Viewing the world the second way is much more sympathetic, but can be difficult in that it can leave one with little hope for the world. Viewing the unemployed man’s decision as a reflection of society’s tendency to keep the poor in poverty or favor those with higher intellectual abilities is much more difficult than blaming him, because we are part of society. We make these social “rules,” and by not actively attempting to change them, we are passively contributing to the power of them over our lives. The historical approach—while it does give one a greater perspective on the world—runs the risk of making one becoming extremely pessimistic. If there are all these systems that have been in place in society for hundreds of years, what can one person do to change them?

In his article, “The New Sociological Imagination: Facing the Challenges of a New Millennium,” sociologist Hector Raul Solis-Gadea discusses the challenges young people today face with trying to take in all that is going on around the world with increasing access to open information about global crises. He offers a possible solution that dates all the way back to 20th century Sociologist C. Wright Mills: We need to be taught that it is okay to have a sociological imagination—that it is okay to be confused and that we need to learn how to balance ourselves to keep us from becoming oblivious or pessimistic about the state of the world.

The sociological imagination enables us to live in the middle of these two perspectives. It teaches us that it is okay to have a biographical approach to the world, as long as we keep in the historical approach and the bigger picture in mind. Each person’s own personal view will be different—it’s inevitable. In order to make positive change in the world, we need differing ideas. But no positive change ever comes from people who are completely one-sided. That has been proven throughout history, and we can even see it today in our American government.

We have to live in the middle of life. We cannot be oblivious to the systems and structures of society as the cause of social injustice, but we cannot attribute it to purely outside societal influences.

So, to my younger self, I would tell her: it’s going to be difficult when you grow up, there is no doubt about it. There are no more shields put in front of your eyes. There are no teachers telling you to stay in line and not look to your left or right. Nobody is forcing you to not look, but at the same time, nobody is stopping you from helping either. 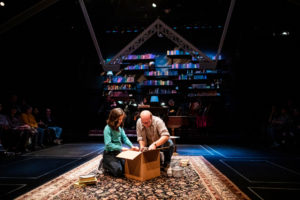