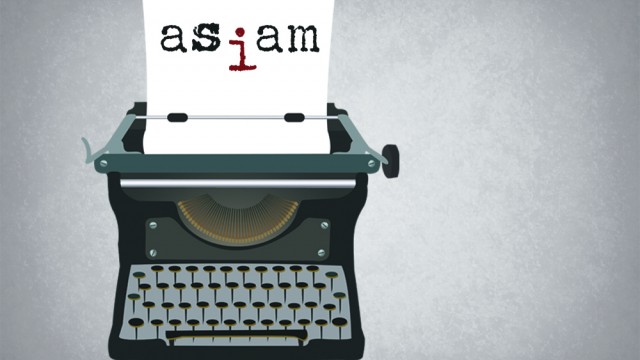 o where are you really from?

For ASIAM Literary Magazine’s co-Editors-in-Chief Yoshika Watson, LSOE ’15, and Long Yang, CSOM ’16, the answer isn’t as simple as a one-word response. “When you hear that question, it’s a subtle form of microaggression that can really be harmful,” Yang said. “There is an underlying assumption that questions the nature of your identity.”

Boston College’s only Asian-American literary magazine, ASIAM first emerging in 1993 as the brainchild of Asian Caucus and BC Professor Ramsay Liam. Originally titled True Colors, the literary magazine underwent significant creative changes since its revival in 2012 by Lucilla Pan, BC ‘14, departing from its traditional journalistic roots. The magazine was rebranded as ASIAM (“As I Am”) in 2010 to represent a more artistic focus.

ASIAM starts by choosing a central theme pivotal to the publication’s focus on Asian-American culture. Past themes include “Wholes of Our Identity” and “Past, Present, and Future.” ASIAM  is currently accepting submissions for this year’s issue, “Where Are You Really From?,” and hopes to release its publication by April 2015.

With the namesake itself as a phonetic double entendre, ASIAM seeks to bridge the gap between Asian and American dualities and foster a sense of selfhood and identity by dismantling boundaries according to its mission statement. The magazine aims to cultivate a unique space that celebrates Asian American culture and produce work that would not fit other traditional literary magazines on campus. While the goal is to promote a common experience and to educate on social progress, the emphasis is placed on the individual. Through the combination of literary works and multicultural identity, ASIAM places personal experiences at the forefront by highlighting social issues and cultural trends affecting the Asian American community.

Watson describes instances where artistic expression has endured even in times of creative hindrance. In her research over the summer of Japanese internment camps during World War II, she discovered that literary magazines emerged in camp communities as people searched for alternative forms of creative expression. Social issues—such as the model minority myth, female adoption, and parental expectations—have all played a part in ASIAM’s previous literary publications.

“You can’t divorce personal experiences from your creative work,” Watson said. “If you’re writing about something important to you, it’s going to relate to social issues.”

While ASIAM relates incidences where social issues that impacted Asian-American lives, the magazine also seeks to showcase creative work produced by Asian-Americans that would have otherwise gone unpublished. By incorporating poems, prose, essays, photography, paintings, and short stories, the magazine’s primary goal is to validate creative talent and facilitate discussions on identity and social change.

For Yang, his experience working with ASIAM has been a particularly enriching one. Bemoaning the under-representation of Asian-American students in English classes and Asian-American authors as a whole, Yang recalls a fond memory of a friend who decided to submit a story to ASIAM who would have otherwise never considered being published.

“The most important message to get across to others is that there is diversity within the Asian-American community,” Yang said. “We’re not all the same. When you think of authors, you hardly ever think of Asian-Americans. Not all of us are good at math and some of us are English majors.”

While ASIAM emphasizes the personal experiences of growing up Asian in America by highlighting artistic and creative expression, the literary magazine seeks to expand its on-campus presence at BC. The editorial board has considered the possibility of including other minority perspectives in addition to Asian-American in the future. Watson and Yang expressed that the ultimate goal is trying to fit the mission of embracing a common identity without being entirely limited by it.

“There is a certain vulnerability when you write from personal experience and your heart that other people might not understand in another situation or perspective,” Watson said. “Literary magazines are a way to validate your creative work. Simply producing is not enough.”

So where are you really from?

“We wanted people to answer [the question] on their own terms,” Watson said. “We wanted to give them an opportunity to say that this is where I’m from, this is what I’ve gone through, this is who I am as I am.”

literary magazine
Learning To Live In The Middle Of Life
TU/TD: Coffee and Darties