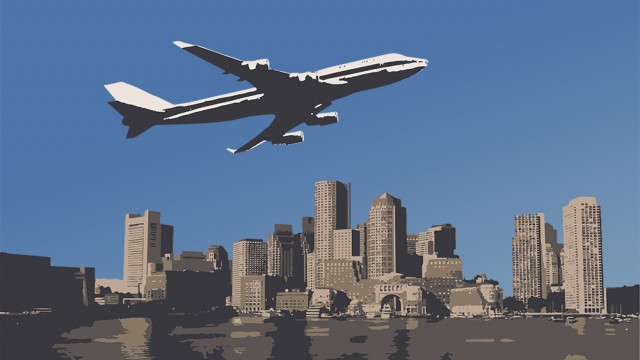 I think about Boston when I’m highest in the sky.

At well over 30,000 feet in the air—halfway between Boston and my home in St. Paul, Minn.—I thought of the city that has been my new home for the past year and a half. With the conclusion of final exams and a sudden lack of any obligations, it seemed that I would finally have time to focus on family and friends, and an old, familiar lifestyle.

But as I put on my headphones and attempted to doze off, I found myself returning to the thoughts of the city, and an accompanying feeling of nostalgia halfway through my sophomore year.

When most people think about Boston, some of the first things that come to mind include universities, hospitals, museums, and the Red Sox. Or maybe you fantasize about walking down Newbury St. toward the Pru. Some may even have an overpowering craving for a cannoli from Mike’s Pastry in the North End.

In his first State of the City address last week, Mayor Martin J. Walsh, WCAS ’09, described his vision of the city in front of a crowd of 2,500 at Symphony Hall. After 20 years of a Menino-led Boston, Walsh entered last year under Menino’s shadow. What was remarkable about Walsh’s speech last week was the fact that he injected his own idea of Boston as a community—one contingent upon the individual voices that give the city a sense of character.

“When I think about what that means, I think about all the people who inspired me in my first year as mayor,” Walsh said in his address.

Similar to Mayor Walsh, as I sat on that flight back to the Midwest, I thought of the individual people that have formed my vision of Boston. Immediately, I thought of Didi Delgado—a diminutive woman with an overpowering voice—who led thousands of demonstrators across the streets of the city last month, protesting the decision not to indict the officer involved in the alleged homicide of Eric Garner. In the wake of the countless protests across the city, Delgado proved that one woman could make a huge impact in the city by organizing a peaceful protest and raising awareness for something that affected thousands of people in Boston. She was relentless.

I also thought of Cleve Rea, an unemployed software developer who was in a crowd of ex-convicts, recovering addicts, and others as over 700 homeless people were evacuated from Long Island and the city’s largest homeless shelter after the bridge was shut down. As Rea slept on countless cots in temporary homeless shelters across the city, he stayed positive. He rose each day at dawn and slept through the coughs and moans throughout the night, moving from shelter to shelter. Now, the city recently opened an upgraded shelter on Southampton St.—a huge step in confronting the problem of finding shelter for the city’s homeless population. When I think of Boston, I remember Rea’s resilience.

As I present my first column as Metro Editor for The Heights in 2015, I encourage BC students to find the individuals that will shape their view of the city. Yes, there is so much to do here, but there is much more to our college experience than our beloved campus, despite one’s willingness to never leave it.

In Sean Collins’ timelapse video, “A City Upon a Hill,” we see Boston from every angle. We see it from atop the Prudential Center, the John Hancock Tower, and along the Charles River. We see sunrises, sunsets, and fireworks across the city’s skyline. Despite the video’s beauty, we do not truly see what is going on in the city everyday.

There is much more to a city than a video, an Instagram of the Boston Public Library, or a trip down Newbury St. Too often, BC students are contained in their own bubble and do not truly get to know what is going on in the city in their school’s name.

So, what did I learn about Boston while I was on an airplane 30,000 feet above the ground? Only that there is much more to learn.