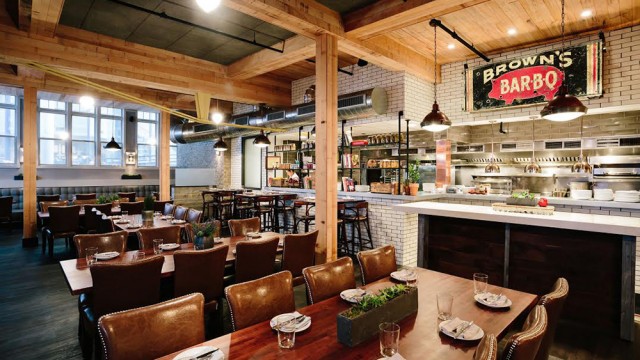 Located in the heart of Cambridge, Alden & Harlow is looking to change the way restaurants serve food by providing a local source of ingredients to consumers.

Chef-owner Michael Scelfo, formerly of Russell House Tavern in Harvard Square, explained how combining local ingredients with a student atmosphere reminded him of a family-style dining table—one with an eclectic mix of college students, neighborhood regulars, and sophisticated diners.

“He [Michael Scelfo] likes to use local ingredients, work with people that are based out of Boston or nearby Boston, and just sort of stuff that is environmentally conscious,” said Jen Fields, the general manager of Alden & Harlow.

Before founding the restaurant at 40 Brattle St. in Harvard Square, Chef Michael Scelfo had a number of other professional culinary endeavors. The Russell House Tavern, Temple Bar, and North Street Grille formed a following for Chef Scelfo before he made the transition into the space once claimed by the beloved Harvard Square restaurant Casablanca. Now, since replacing the Harvard Square benchmark, Alden & Harlow has reclaimed the space’s designation as a quintessential Cambridge eatery.

The welcoming feel of Alden & Harlow can be credited to the atmosphere of a close-knit group of family and friends at a warm dining table projected onto a larger, subterranean dining space. Bright, bold, contrasting colors and flavors play equally on the eyes and taste buds of patrons at Alden & Harlow.

“Cambridge is a very mixed area, especially Harvard Square, so we see all types of people,” Jen Fields said.

With a changing menu every week, the Alden & Harlow selection of food pivots around the fulcrum of environmentally aware American food. Although the menu fluctuates, there are several mainstays on the menu.

“Things that have been on the menu since we opened would be our charred broccoli, our chicken-fried rabbit, our Pat Woodbury’s clams with smoked pig’s tail.” Fields said.

“The secret burger has been on since we opened—those are some of our most popular items.”

The vegetables in Chef Michael Scelfo’s arsenal are put on the plate in contrasting, colorful arrangements that culminate in a feeling of having just eaten a home-cooked meal at the family dinner table. The meat paired with the vegetables, as in Alden and Harlow’s New York strip steak is just as fantastic and eye-popping as dishes that boast standalone meats or vegetables, such as the pickled Verrill Farm corn pancakes or the braised and fried chicken thighs.

With Alden and Harlow’s one-year anniversary coming up in a couple of weeks, GM Jen Fields said that business has been “fantastic.” It has not been easy for Alden & Harlow to fill the gap left by the absence of Casablanca, but through the reworking of simple ingredients such as vegetables, nuts, and the classic hamburger, it has become a new standby restaurant in Harvard Square.

Although Alden & Harlow is the first restaurant that Chef Michael Scelfo opened himself, his first foray into founding his own eatery has shown to be an early success, along with a lesson in implementation of his family-table philosophy.