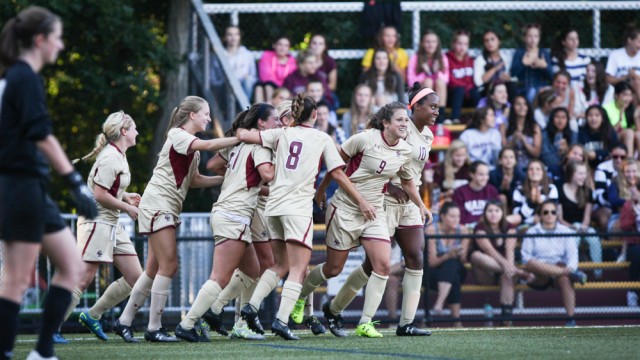 nbeknownst to Allyson Swaby, another present was waiting for her in her inbox on Christmas day.

It was not until two days later, however, that Swaby saw the surprise email from United States Soccer. The same email was waiting for Steph McCaffrey, as both players received an extra gift this holiday season: a call-up to U.S. Youth team camps.

Swaby, a freshman, was called up to the U-20 team, while McCaffrey, a senior, turned her call-up to the U-23 camp into an invitation to train with the full U.S Women’s National Team (USWNT).

“I was really excited, obviously nervous at the same time, when I got the news,” Swaby said. “But, I mean, these are rare opportunities, so I am excited.”

The call-up comes as a very pleasant surprise for Swaby and her coach, Alison Foley. Knowing she had the talent to make it with the national teams, Foley originally laid out a timetable in which Swaby would get the call-up after next season, but a fantastic showing from the defender in ACC competition provided immediate rewards.

“For defenders especially, it’s a tough adjustment in the ACC because of the talented and experienced forwards, and she certainly held her own and matched up well,” Foley said in a phone interview. “She really was a full year ahead than we thought she was going to be.”

For McCaffrey, the surprise came only recently. Training with youth teams has been nothing new, as she had been called up to the U-23 camp last spring, but this time, the forward made the leap into the full national team camp after impressing in inter-squad scrimmages.

The U-23 and full USWNT camps were held simultaneously in the venue, so McCaffrey was able to show off her talents in front of the national team coaches. A day after youth camp ended, McCaffrey received the offer of a lifetime: to stay and train with the full team for the remainder of the camp.

“Everybody at this camp is so good, and I never really thought of myself as on their level, so I was so surprised, so honored, and so humbled to be called up,” McCaffrey said in a phone interview. “It was awesome.”

Even as a freshman in high school, Swaby was always ready for the next level.

A starter on varsity from day one at Hall High School in West Hartford, Conn., Swaby competed physically with players two or three years older than her.

“She was ready to play from the first time she stepped on the high school soccer field,” Scott Ferguson, Allyson’s high school coach, said via phone interview. “And as she got older and faster, she was so much fun to watch.”

Raw athleticism defines the strong defender. Although her strongest talent was on defense, Swaby was called upon by Ferguson to play forward at times in high school when the team needed goals. Even there, she shined.

While able to play anywhere, she started working out more seriously her junior year of high school as she started her fast track to the U.S. youth camp as one of the most physically gifted defenders out there.

“Her athleticism is second to none,” Foley said. “In terms of pure athleticism, she may be the best our program has ever had.”

Starting all 18 games, Swaby made the all-ACC freshman team after a fantastic first season and, as a result, drew the attention of the youth national team coaches.

She is, however, of a much different mold than most of the current national team’s defenders. At all levels, most are converted forwards, so playing alongside these more technically skilled players will help the out-and-out defender more than anything.

The most interesting aspect of the U-20 camp, which will be held from Jan. 24-31, is the scrimmage against Bayern Munich. The German club boasts a number of players on the full German Women’s National Team, giving the U-20’s quality experience against top competition.

“It’s going to be interesting, because that’s a full age team,” Swaby said. “It will definitely be good experience to play against older and more mature players, and hopefully we’ll do well against them.”

Playing against older players will come as no surprise to Swaby though, as she looks to seamlessly transition into a new phase of her soccer career.

On the other side of the field, McCaffrey tortures defenses with an incredible ability to create individual scoring chances.

“What separates her, and what makes her so spectacular, is her ability to receive balls in one versus one situations,” Foley said. “When you have something like that, you want to make sure that continues to be a strength.”

The talented forward scored six goals and led the Eagles with seven assists in her final season at BC, en route to earning All-ACC first team honors this past season for the second consecutive year.

After participating in the U-23 camp last spring, McCaffrey made the necessary personal leaps forward to prepare herself for a second go at the youth camp.

While her technical skills may have only needed fine-tuning, the effort to raise her fitness level was the last necessary step that gave her the edge and allowed her to move up to the full national team.

“She really focused on becoming a better athlete, and she’s as fit as she ever was after the last camp,” Foley said. “She took her work in strength and conditioning much more seriously.”

On top of all the national team news, McCaffrey is looking forward to starting a new chapter in her soccer career, as she will graduate from Boston College this spring.

Last week, she was drafted fifth overall by the Chicago Red Stars in the NWSL College Draft, and was subsequently traded to the Boston Breakers, where she will team up with former teammate Kristie Mewis. After training with the Breakers for the last two years, the move to her hometown team seemed inevitable.

“It’s so fun,” McCaffrey said. “I’m so excited to be playing in my hometown. The Breakers are a great organization, and I’m just so glad it worked out.”

Swaby joins McCaffrey and other teammates in the latest in a line of recent U.S. call-ups for BC women’s soccer.

Sophomore Hayley Dowd was called into the U-20 camp as a freshman last year, and most likely would have been back with the youth teams this year if not for an untimely injury at the end of the season.

Similarly, junior McKenzie Meehan’s hopes of building off an incredible display in the U-20 CONCACAF Championship were derailed by a preseason ACL tear.

BC’s best player from recent years is Mewis, a current USWNT player and Eagle from 2009-2012, which includes two years alongside McCaffrey.

McCaffrey said of her former teammate:

It’s great to come in and have your best friend here. She’s been so great in easing my transition and showing me different tricks in how to do better on and off the field, and I couldn’t be more grateful to have her here.

With the spotlight now on Swaby and McCaffrey, the team that surrounds them has been influential in the development of both players.

“For the most part, the advice has been to not put too much stress on yourself, and be as relaxed as possible when you get there,” Swaby said.

“I have to give credit to my teammates at BC,” McCaffrey said. “The team and the coaches do a great job of making us better players. Being around such a great group of people definitely improved my game over the fall.”

For one player, it’s just the beginning of an exciting future—for the other, it’s the high point of a lengthy career in maroon and gold.

But for both Swaby and McCaffrey, there is a common goal: Make an impact in the red, white, and blue.