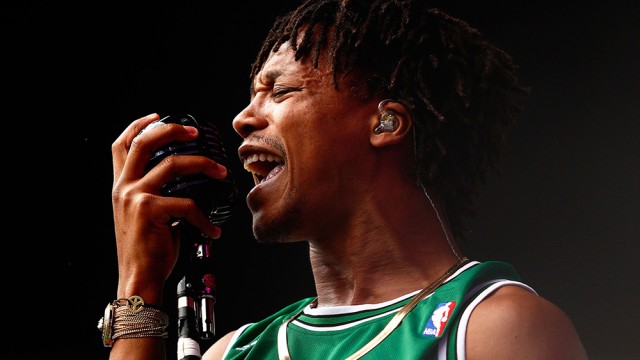 Lupe Fiasco’s artistic journey has not always been aligned with popularity and fan appreciation. Though his earliest work earned him a significant fanbase, Lupe’s success has dwindled in recent years to subpar album releases. With his newest record, Tetsuo & Youth, Lupe Fiasco stands his ground. He maintains his musicality over all else, focusing on passion and lyrics and ignoring marketability. Tetsuo & Youth is not for the casual listener. Its lengthy tracks are more like novels than songs, and the complexity of the rapping and instrumentation requires intense focus to understand. The album is inaccessible in many ways, but that’s how Lupe seems to like it. His work is art demanding to be heard––not simply background radio tracks.

Significant markers throughout Tetsuo & Youth are four interludes, entitled “Summer,” “Fall,” “Winter,” and “Spring” that warily serve as transitions among the album’s 12 other songs. Their connection is weak, though, and these seasonally-named tracks are gimmicky at best. Quick minute and a half snippets of evocative sounds portray kids playing in the sun, leaves crunching under footsteps, wind blowing eerily, and birds chirping. They fit awkwardly into the album as a whole and serve little purpose musically. Though they are definitely tacky, these tracks speak to Lupe’s mentality in creating his album. He has a vision and he’s following through with it—no matter how clumsily it presents itself to listeners, buyers, and producers—and that is worth supporting.

It is probably most effective to first consider what makes Tetsuo & Youth a less than perfect album. While all of these claims could be defended by Lupe Fiasco’s artistic lens, some elements of his work are genuinely difficulty to listen to. Though Lupe does comfortably employ an array of instrumental parts in his songs, some do seem out of place. Particularly, the western intro and outro to “Dots & Lines” are off-putting, and their lack of relevance with the song makes it more difficult to settle into the track’s melodic groove as it progresses. A jazz-inspired interlude to “Adoration of the Magi,” for example, is also problematic. Lupe Fiasco does effectively feature various different vocalists in his songs for hooks and choruses, and some of his best collaborations are with singer Nikki Jean. Jean is featured on three different songs of Tetsuo & Youth, and for good reason. The two artists perform together impressively, and their collaborations don’t tire over multiple tracks. In “Little Death,” the two sing and rap separately, yet still complement each other to create a unified piece. The two sing alongside each other in “No Scratches,” a standout single on the record that shows Lupe Fiasco’s depth as a musician. Its rock elements, countered with emotional vocal lines, display Lupe’s adventurousness. He doesn’t need to produce a standard rap record; he wants to delve into new genres, even at the expense of popular appeal.

Another Nikki Jean collaboration on the track “Madonna (And Other Mothers In The Hood),” is arguably one of the album’s most influential singles. Nikki Jean provides a crucial female aspect to this song—where the heavy rap is entirely devoted to the importance of mothers in crumbling societies, Nikki Jean’s vocal line softens and comforts. The juxtaposition in sound is indeed elemental to the song’s thematic entirety: in chaotic, violent times, a mother’s love serves to calm. Lupe intelligently included evocative soundbytes— sounds of police and prayers — to emphasize the degree of turmoil in these communities. “Madonna” is indeed an example of what Lupe does best, and its social critique is undeniable.

“Prisoner 1 & 2,” featuring Ayesha Jaco, is another socially-inspired track that evokes a powerful argument about the justice system. An automated voice from jail introduces this song, as the listener is instantly associated as an outsider about to become intimately connected with an inmate. As Lupe critiques crime, violence, and social injustices, he simultaneously creates an engaging musical interlude, utilizing dramatic stringed instrumentation to work against the more urban, technical contents of the track. As the automated voice continues on throughout the song, it is clear how intensely Lupe sees art amidst a struggle.

The core of Tetsuo & Youth is in its poignant, socially-aimed lyrics that frequently present injustices in an honest and emotional way. This is what Lupe Fiasco most embodies as a rapper, and its value to him has remained well into this record, which unapologetically represents himself. Because of the music’s nature, though, it is not an easy listen, or one that will be played on the radio or at clubs. To truly understand what it is that Lupe tries to propose with his songs, a listener has to be focused. The songs are dynamic and multifaceted, and different elements––whether lyrical or instrumental—are constantly emerging. Tetsuo & Youth is an album that grows with its individual listeners, and that if given the attention of an audience, will make for a vastly formative experience.