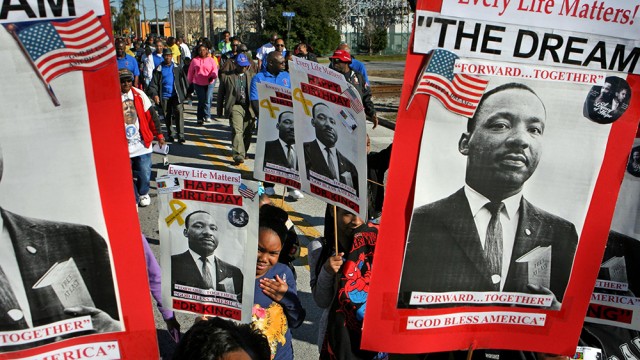 n the 50th anniversary of the march for voter rights in Selma, students and faculty gathered in Gasson 100 to celebrate the movement Martin Luther King, Jr., led and also discuss the ongoing struggle for equality.

The memorial gathering began with a dance performance by the Spirit and Truth Dance Ministry Jubilee Christian Church group, and a vocal performance by Against the Current, Voices of Imani, BEATS, and Liturgy Arts Group. Several scriptural passages were read, including a Lamentations passage beginning with “I have been deprived of peace.” The event ended with a reading from Ephesians about wearing the “armor of God” against evil powers.

The atmosphere of the event was energetic, with a band interspersing the speaking with music and singing, and a more vocal audience than one at Boston College might be used to. Reverend Howard McLendon, an interfaith campus minister, greeted the audience and told them he expected them to act as if they were in the new faith Baptist Church where the audience does not say “Amen” occasionally and quietly, but loudly and with other interjections when they hear something that moves them.

On Martin Luther King Jr. Day, we should commit ourselves to his ideal and vision of the world as it could be, said Barbara Jones, the vice president of Student Affairs.

Fr. Jack Butler, S.J, vice president of the Division of University Mission and Ministry, spoke about his experience hearing King’s father speak to his high school in Atlanta, demographically similar to BC about 10 years after King was assassinated. King’s father spoke about his son’s movement and the need to continue to carry it forward. He asked if the students felt “uncomfortable,” and said that they should, and that they should take those feelings and use them to come together and enact change.

Patience Mark, CSON ’15, received the Martin Luther King, Jr., memorial scholarship for her work as a student of nursing and commitment to solving the inequities of health care.

Mark gave a passionate spoken word poetry performance called “Hands Up Don’t Shoot” in which she expressed anger and sadness over recent victims of racial violence in America and their “dreams deferred”. Mashaunda McBarnett, LSOE ’16, Ashlie Pruitt and Daniel DeLeon, both A&S ’15, gave a joint spoken word performance entitled “I (I) Have (Can’t) A Dream (Breathe)”.

Reverend Brandon Crowley, a pastor at Myrtle Baptist Church in Newton, spoke about King’s idea of the “beloved community” at the core of much of his writings. Crowley saw this principle in action one day when he was waiting for the bus on a bitterly cold January day and saw children of several different races playing jump rope together. They did not allow the outside climate to stop them from playing, just like we should not allow hostile political or social climates to silence voices demanding equality, he said.

Crowley detailed the way in which the children played, giving each their turn at being the “man in the middle,” and not seeing the game as a competition, but a way to encourage their friends to do perform at their best. He also noted the ongoing wealth and education disparity between whites and blacks.

Crowley called for our recommitment to manifesting the beloved community by having open philosophical and political conversations. The event ended with a performance by Sexual Chocolate interspersed with statements about their commitment to the ideals expressed throughout the night, and a final song by the choir that the audience joined.