Accepting Both Poles Of Life

It is widely accepted that magnetic monopoles do not exist in physics. If you cut a magnet in half, it doesn’t produce two magnets with single north and south poles. Instead, it is bifurcated into two weaker magnets, each with their own north and south pole. Could the same process be true of our emotional magnets? Allow me to explain.

A fascinating talk on vulnerability by Brené Brown gave me the idea. A particularly poignant line of hers was the following:

“You can’t numb those hard feelings without numbing the other effects, our emotions,” she said. “You cannot selectively numb. So when we numb those, we numb joy, we numb gratitude, we numb happiness. And then we are miserable, and we are looking for purpose and meaning, and then we feel vulnerable, so then we have a couple of beers and a banana nut muffin. And it becomes this dangerous cycle.”

It sounds like we try to get rid of our emotional south poles, and, like cutting a magnet in half, we fail to isolate the emotional highs of life from the lows, just as scientists fail to isolate a magnet’s polarity. Instead, we get a weaker magnet, a lesser emotional experience.

We do not fail for want of trying. We take drugs, we suppress memories, we hide behind Facebook facades, we lie about ourselves. We do all sorts of odd things to avoid unhappiness, however trivial. We definitely try. There is an abundance of chemical technology whose goal it is to selectively keep happiness and eliminate the “hard stuff” and its side effects. There is an abundance of social norms that encourage not thinking or talking about the “hard stuff”. There is a mountain of social and personal pressures that coal-compress our “hard stuff” deep down in the mines of our souls.

The solution is not to strip-mine our bodies with drugs, sex, and food.

The solution is to keep the “hard stuff” close enough to the surface for you to feel, well, who you really are. Brown found in her research that trying to split the good from the bad results in an overall numbness of emotion, not a net gain in happiness. In the same way, scientists fail each time they cut a magnet in half—they just keep getting smaller, weaker magnets. We fail because we are not wired to have happiness monopoles, just as the universe is not physically able to have magnetic ones.

The Pursuit of Happiness is second-fiddle only to Life and Liberty, as written in our constitution. The problem is that “Pursuit” often manifests itself as a take-home science project whose goal, in absolute terms, is as futile as making a magnetic monopole. There is a lot to be said for happiness. Its pursuit is a noble endeavor. However, there is no north without south, and no capacity for happiness without the capacity for its opposite. What does capacity mean?

It means being able to accomplish lofty goals and bask in your success. It also means being able to wallow in defeat after failing at something you believed you could do—but most importantly, it means accepting that it is okay to feel defeated and done.

It means being able to spend time with friends, to laugh, and to be your silly, happy self. It also means being able to close your door, to cry, and to worry who the hell you even are—but most importantly, it means accepting that it is okay to feel sad and alone.

It means being able to leave the world and fly away when a spark lights up your world in love. It also means being able to wear the weight of heartbreak and sink deep into a bed of inaction—but most importantly, it means accepting that it is okay to feel heartbroken and be crushed.

Feeling happy is a central pursuit—if not the only real pursuit—in our lives. But it’s only part of the story, the top half of the magnet. 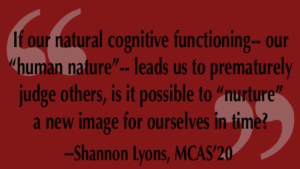