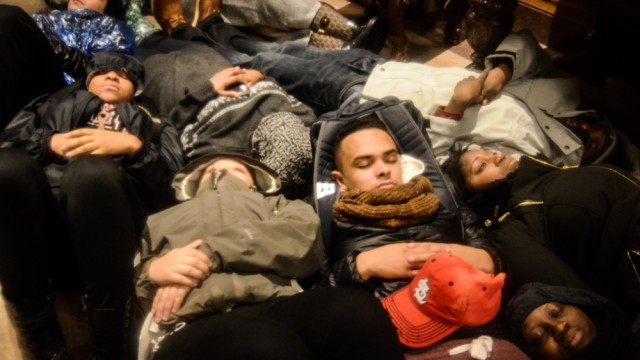 A Crucial Step Forward For Boston College On Issues Of Race

Last semester, Boston College struggled to find an appropriate response to the non-indictment decisions in regards to the killing of Eric Garner and Michael Brown, two unarmed black men from Staten Island, N.Y., and Ferguson, Mo., respectively. Drawing harsh criticism from both students and faculty, the University’s disjointed answer to a die-in protest staged in St. Mary’s Hall brought to light an institutional inability to adequately address issues of races, as thoughtfully outlined in a letter by the Black Student Forum to The Heights last December.

The Jesuit Institute has taken a strong, positive stance on the issue, spearheading an initiative that will provide forums for students and faculty to discuss matters concerning race. Beginning with a “Race in the USA” panel that took place last Wednesday, the Institute plans to coordinate an ongoing, concerted series of conversations through the spring semester, redirecting energy of students and faculty toward improving race relations at BC.

At the forefront of the initiative is Rev. James Keenan, S.J., director of the Jesuit Institute, who is very excited about the potential that these discussions hold. He cited the St. Mary’s protest as an important catalyst in bringing the concerns of the student body to the administration, stating that BC’s discussion on race should move past the immediate concern of the disciplinary consequences these protesters faced.

The St. Mary’s die-in protest was a pivotal event, bringing larger systemic issues at BC to the attention of the administration. Faculty members who made their presence known also added weight to the conversation, connecting the concerns of students with the broader BC community.

Administrators are limited by their role as the enforcers of rules, and working in such a capacity, cannot effectively respond to some deeper questions of justice and equality in University affairs. BC’s large Jesuit population will be invariably important in orchestrating the follow-up to last semester’s events. The upcoming panel discussions are an important first step in answering the students’ call for the resolution of American racial injustices—many of which perpetuate here at BC.

Instead of simply being a lecture, these talks will allow students to talk with each other as well as with the faculty through open discussions. The Jesuit Institute has expressed its desire to listen more than lecture, and promote dialogues between students and faculty.

The deep, spiritual voice that rumbles through BC’s institutional framework needs to be directed toward fighting racism at all levels of University culture. BC currently stands at No. 8 on the Princeton Review’s 2015 list of schools with “little race/class interaction,” a ranking based on the input of current students. This is a shameful mark on the school, and should be treated as a matter of extraordinary importance.

The massive issue of race on campus can become more manageable if addressed through focused dialogues amongst students and faculty, and the Jesuit support will be necessary in pressing for decisive action on the issue.

Thus far, the discussions have been from the students’ perspective, focused on their experiences on campus. The first panel has already made a strong case that these sort of discussions are beneficial and can invite meaningful conversation onto BC’s campus. The dialogue between the students about a potentially difficult subject was very respectful, yet very candid. The forum was a safe space for students to discuss race and have their concerns sufficiently regarded, something that might not have been able to occur during an average day at BC.

Ultimately, the Jesuit Institute should be praised for its proactiveness in taking steps to address the issues regarding race on campus. Students made it clear at the end of last year that they were deeply concerned about the events that unfolded in Ferguson and Staten Island and were unsure of their school’s ability to understand that frustration.

On a deeper level, last semester’s events pointed to problems in the way students of color are treated on campus. It brought conversation of BC’s mission as a Jesuit Institution back to the center of student concern, with many of the complaints raised against the University worded with the very language the institution has used to define itself. It reconnected the student population with a historical tradition of protest on campus, and in a concrete way, charged student organizations to reexamine problematic notions of “social justice,” that stress solidarity with people abroad but ignore the fraught state of relations here in Chestnut Hill.

In the months to come, the Jesuit concept of solidarity will be critical in seeing across the University’s racial divide, in bringing together students and faculty, and in understanding the struggles students of colors face everyday at BC. 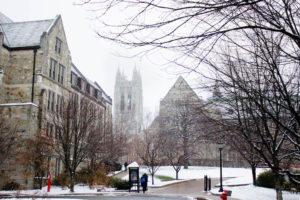