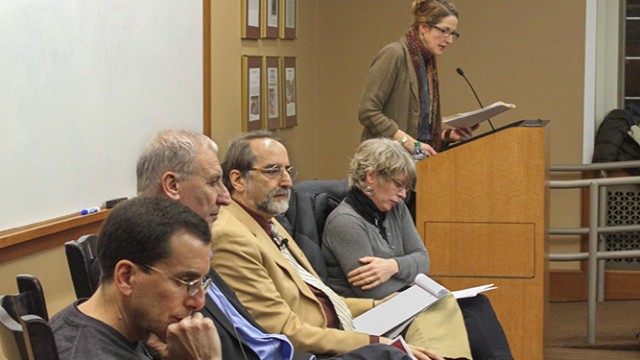 So long as the new world continues to lean towards a 140-character mentality, there seems to be little room for literary forms beyond normal briefs and articles. “Newsworthy: New Forms of Journalism, Personal Essay and Public Reflection in an Age of Entertainment” explored how different means of connecting people with information can still find a place in the 21st century. The third event in the Clough Center’s “The Arts and the Culture of Democracy” series, the Thursday night panel was held in Devlin 101.

This edition featured Edward Hirsch, a poet and critic who worked in the Creative Writing Program at the University of Houston; Jill Lepore, the Kemper ’41 professor of American History at Harvard University and a writer for The New Yorker; Carlo Rotella, the director of American Studies and the Lowell Humanities Series at Boston College and a regular columnist for the Boston Globe; and Lawrence Weschler, a former staff writer at The New Yorker and currently a distinguished writer-in-residence at the Carter Journalism Institute at New York University.

With its “Democracy” series, the Clough Center sought to analyze the links between art and democracy in our contemporary society. The two previous lectures, “The Arts and the Culture of Democracy” and “The Political Life of Poetry,” were held this past September and November in Devlin Hall. Hirsch, who moderated the event, has been featured at all three lectures.

Hirsch began by discussing how the typical news formats people read compare to poetry. He referenced Ezra Pound, who claimed that literature and poetry are made up of “news that stays news.”

He also spoke about the attack on Sept. 11, 2001, and how he was struck by the number of people who looked towards poetry, both new and existing. Hirsch referenced a poem by Adam Zagajewski titled, “Try to Praise the Mutilated World,” which ran in The New Yorker in Sept. 2001. Although many people believed the poem was written in reaction to 9/11, it wasn’t—Zagajewski penned it in response to earlier events in Poland.

Weschler spoke next, focusing on long form narrative. He argued that the “Twitterverse” and other outlets do not allow humans to absorb information as well as they can through narratives. He acknowledged, however, the difficulty in capturing the chaos in the world.

“You are imposing a form on all that material—a form that is a story, and a form that is fictive by its very nature,” Wescher said. “It is composed, it is made up. You try and turn it into a way that it can be read. That is a fictive act, and it is a provisional act, and that is its glory.”

Lepore took the floor next to discuss how modern day media has afflicted both the past and present.

“It’s a huge impoverishment for any civil society to have no past,” Lepore said. “But we really have eradicated the past with this constant attention to the present in the sense that one must be keeping up with the latest, news-breaking event. That sense of always being on the edge of the next thing is a particular feature, a particular posture, of the moment we live in history.”

She also spoke about academics’ responsibility to deal with information, citing the controversies of climate change as one instance where an intended intellectual discussion was misinterpreted.

“When academic historians behave as though they don’t know anything and that nothing is knowable, the public looks elsewhere for an explanation, for an understanding of the past,” she said. “I think that’s dangerous to our public sphere.”

Rotella spent the majority of his time explaining the experience of being a columnist. He spoke about his time doing a story on the governor of Massachusetts, and hearing in the office, “We don’t want this to end up on the editorial page of the Boston Globe.”

By the end, all of the writers had touched in one way or another on the importance of accuracy. Wescher told a story about a graduate class he used to teach, which consisted of half journalism and half poetry students.

“I used to say we were here trying to create a generation of lyrics reporters and investigative poets,” he said. “The point being that the reason we read so much poetry was about precision—getting the words right.”

journalism panel
For Unregistered Student Organizations, An Ambiguous Future
Splash Moves Ahead In Planning Of Fifth Year At Boston College 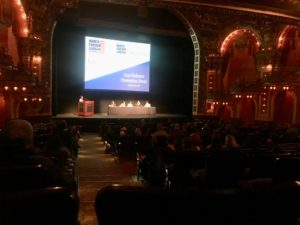