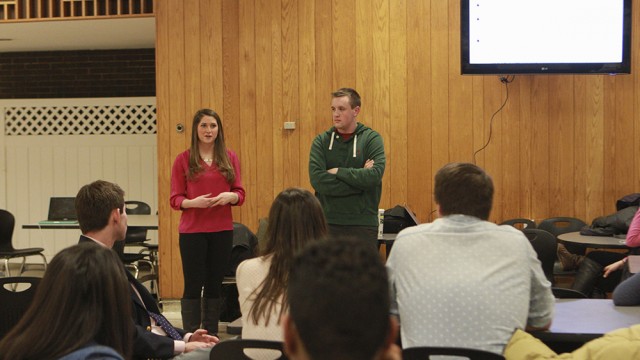 Of the teams represented at the mandatory meeting, there were two confirmed as seeking candidacy for president and executive vice president, respectively: Cassidy Gallegos, LSOE ’16, and Michael Keefe, A&S ’16; Thomas Napoli, A&S ’16, and Olivia Hussey, A&S ’17. Ryan Quirk and Nico Varano, both CSOM ’16, did not attend the meeting, but were confirmed as a team by the Elections Committee.

James Kale, LSOE ’16, and Jose Altomari, A&S ’16, are unconfirmed bids to run in the upcoming election, but were also in attendance Thursday.

The meeting, led by Dan Ahern and Kiera Keller, co-chairs of the Elections Committee and both A&S ’15, discussed the necessary qualifications for nomination in the upcoming election and the procedural guidelines for campaigning.

To secure candidacy and a nomination on the election ballot, each team must gather 250 signatures by Jan. 26. The Elections Committee also highlighted the Presidential Elections Code, which the prospective candidates must adhere to for the duration of their campaign.

The code outlines general campaign procedural guidelines, as well as behavioral expectations for the campaign team and the candidates.

“Candidates, along with their campaign teams, are expected to act with integrity throughout the entirety of the campaign season,” reads Section 1, Part A of the elections code. “As leaders of the Boston College community, it is in the best interest of all candidates to act as role models both within and outside of campaigning.”

Among these guidelines are rules for appropriate campaigning, campaign materials, electronic communications and social media, and residential life. The elections code also features a Sanction Guideline that details the handling of disqualification, violations, and complaints relating to campaign season.

Unlike years past, primary elections will not be held this elections season. Primary voting is only necessary in instances where five or more teams are confirmed as seeking presidential candidacy, said the Elections Committee, with the intention of reducing the amount of teams running to three. This year’s initial pool of possible teams is already larger than last year’s, which was comprised only of one team—an event that forced the candidacy to be reopened after the initial deadline to avoid an uncontested election.

“We expect that since more teams are running this year, the candidates will be even more enthusiastic and ambitious than last year,” Keller said, in an email. “We also believe that with more teams involved, more of the student body will also be involved.”

The official campaign season will commence on Feb. 9, following a campaign kickoff event on Feb. 8, and will last 10 days, keeping the reduced duration of the last year’s campaign season. Candidates are not allowed to campaign in any form or to any extent—beyond stating their intention to run—until the official teams are announced at the kickoff event.

The Elections Committee hopes to continue the trend of high participation by the student body, through new ways of publicizing and facilitating the voting process, and events that encourage student attendance and involvement, Keller said.

Voting will open at midnight on Feb. 17 and last until 8 p.m. on Feb. 19. The official election results will be released at 8:15 p.m. that evening.

“After meeting and talking with the candidates, I noticed their strong determination and commitment to lead their student body,”  Keller said. “The candidates have been diligently planning their platform and campaign ideas.  I feel that this year’s Presidential Elections will be a very close race.”

UGBC election 2015 election2015update
State Of The Oscars: Back To Blank Basics
A Crucial Step Forward For Boston College On Issues Of Race