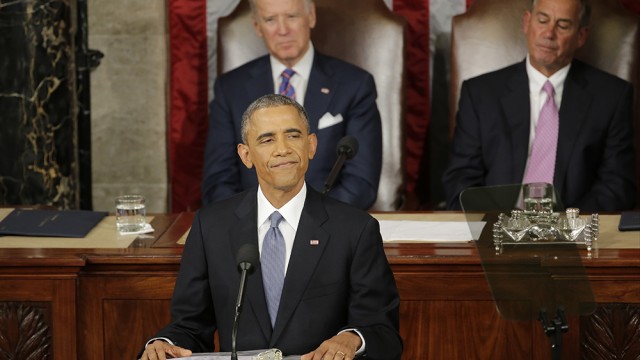 My dismal grade was mostly my fault, the result of sitting at the back of the classroom and falling asleep approximately 30 seconds into the daily slideshow of notes. It was a constant snore-inducing barrage of mitochondria and nucleic acid pairing—my head would hit the desk almost instantly each go at it.

I would have failed, for sure, had it not been for the “saving grace” assignments right at the end of the semester. Sure, it took a few all-nighters, but those extra credit projects are what pushed me out of the possibility of a life of asking, “Would you like fries with that?”

The State of the Union Address is like a high school class.

It moves along incredibly slowly, cherry-picks which facts to teach, and it functions as the president’s “Saving grace” extra credit assignment. If the presidency were AP Bio, this would be President of the United States Barack Obama’s shot to turn things around, to make the grade.

But just like AP Bio, I stopped paying attention about eight minutes through.

The problem with the State of the Union in recent years is that it is not being utilized to its full potential. The State of the Union was originally conducted as a relevant message to Congress, urging progress and assessing the major problems facing the nation. With each address, the sitting president follows the same drab formula: rattle off a list of accomplishments, mention statistics on lowered unemployment rates, talk about the increase of jobs in the private sector, and introduce new initiatives, firmly informing the nation that “there’s still more work to be done!” With a deadlocked Congress, exactly how that work will be done is questionable.

The State of the Union is tired and dowdy.

The speech itself is far too long, clocking in at over an hour, with various personal antecedes featuring neighborly Americans as props to illustrate the various successes of the presidential term so far. While the president covers broad problems that will be the focus of the remainder of his term, nothing is definite. There are no concrete plans or strategies. This plants the American people in a position where they must place pure trust in the political system to deal with the problems addressed such as environmental concerns, health care, and social movements, which were largely brushed over in the recent State of the Union. The events of Ferguson and the allegations of police brutality were glossed over tactfully, while what the nation really craved was a firm stance on the growing unrest. Shying away from difficult statements is in no way beneficial to social turmoil. While the president may fear the polarizing effects of such a statement, the consequences of offering a safe fluff piece instead could prove disastrous.

As of late, the antics of the audience get more attention than the substance of the speech. The moment State Representative Joe Wilson, a Republican, screamed, “You lie!” is the only thing I remember from the past State of the Unions. The shining moment in this State of the Union that dominated both news stations and Tumblr GIFs, was when Republicans cheered when President Obama stated he had no more campaigns to run. He cheekily replied, “I know, because I won them both.” There is something transformative about watching the dowdy white men in suits become as petty as middle school girls, making snide remarks and eye rolls, that catches the public’s eye. We all suspected Congress was a snake pit, and now we have these snarky little remarks to prove that yes, politics are exactly as petty as we thought they were.

Gone are the days of former President of the United States Bill Clinton’s 1996 address, where faced with a Republican majority and a looming threat of government shutdown, the president made a calculated move towards the center, declaring, “The era of big government is over.” This neutralizing realignment of his policies kept the Republican majority in the house satisfied and allowed Congress to cohesively function. Today, the word “compromise” falls upon deaf ears. The polarization of our country into red and blue states has never been more distinct, and never been more debilitating. The State of the Union in recent years has exacerbated that: not only by broadcasting the opposing party boo the presidents’ statements, but also by facilitating the absolute circus that the response to the State of the Union has become. Once, the party out of power used to respond to deliver critiques and alternates the President’s proposed plans. Now, each and every candidate vying for election in 2016 uploads a YouTube video, Twitter rampage, or Facebook rant, each more ridiculous than the next. They inspire memes and are the running joke on CNN the next day. An opportunity for a real, measured, powerful statement is lost. Instead, we get Senator Ted Cruz’s unsanctioned and completely bizarre YouTube video. After watching it, I couldn’t tell whether Cruz was responding to the president’s address or making a hostage video. The day politicians discovered social media was a sad one, indeed.

So why should we, college students swamped with new syllabi and club meetings, care about a political system we barely believe in? In 2014, polls conducted revealed that seven percent of Americans have any real faith in Congress. Seven percent.

This is why the State of the Union is important: It is a vehicle of assurance. It should function to tell the American people, “This is what you elected me for, and look how I will accomplish these goals.” So many people our age don’t care about the State of the Union simply because it has faded into irrelevance. Like AP Bio slideshows, it is dreadfully dull. Focus is pulled from the speech to linger on the antics of politicians, and the responses are merely degraded to a running gag on late night Comedy Central shows. If the State of the Union wants to be powerful and efficient, it must take steps to become concise, concrete, and substantial. The State of the Union should not be a time to play it safe. The politicians of America should take a strong position and make a plan, but not remain stubbornly averse to compromise.

state of the union
The Problem With Federalizing Community College
Roundup: Track Impresses At BU