Home » A Tribute To The Bard: His Words and Wisdom 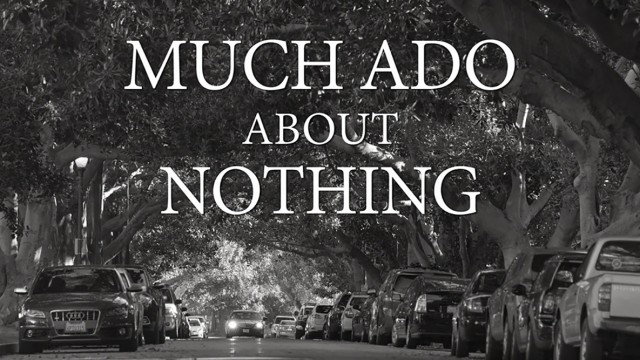 A Tribute To The Bard: His Words and Wisdom

I would imagine that it is every artist’s dream that her work be recognized after death. An artist’s goal is to create an everlasting impact on a reader, observer, or listener. William Shakespeare has particularly earned his place in history, standing as arguably the greatest playwright of all time. Despite Shakespeare’s prominence among scholars and readers of our time, however, most American filmmakers have sadly abandoned Shakespeare’s plays as worthy adaptations for the silver screen.

There is, however, one notable exception.

In 2012, Joss Whedon, director of Marvel’s The Avengers, its upcoming sequel, and cult show Firefly, created his own adaptation of Much Ado About Nothing, one of Shakespeare’s renowned comedies. Filmed over the course of twelve days at his home in Santa Monica, California, Whedon’s version of the comedy features several recurring actors from his film career and is set in a modern setting rather than the Elizabethan time period. The film is awe-inspiring, with its incredible production and wonderful cinematography. Although Whedon is not nearly the first to adapt a Shakespeare play outside of its original context, his film is an example of the creative substance available within these works.

Reading Shakespeare’s plays for the first time, I tend to fall into a bit of trap figuring out the tone and cadence that lines should be spoken. Also, though I’ve in recent years become more adept at understanding the dialogue in the plays, I entirely understand that in a modern context these works are not entirely accessible to a general audience.  However, I’d argue the skills one acquires from continually tackling Shakespearean language make a person a better reader, a better analyst, and a more adapt member of any theater audience.

These plays feature some of the most recognizable archetypes that exist in human storytelling and reach across several cultures and time periods to bring together myths and legends into compassionate and heartfelt storytelling. Although it may take a quite a bit of time and a lot of genuine effort, there is an overwhelming joy in deciphering Shakespeare’s language. For any avid reader, Shakespearean writing is filled with the most passionate, elegant, and expressive language.

There are 38 plays attributed to Shakespeare, some of which, like Hamlet and Macbeth, are far more famous and distinguished in modern culture than are some of his less notable works like The Comedy of Errors or As You Like It. Although audiences have seen several variations of some of Shakespeare’s most reputable works, there exists an expansive grove of interpretations and settings for his lesser observed plays that viewers and critics would probably die to see.

Granted, there are many Hollywood directors and producers that would do this playwright’s fame large injustices, I cannot help but imagine a Tarantino Titus Andronicus or a Scorsese Julius Caesar. Shakespeare left behind an impressive assortment of comedies and tragedies that still hold relevance today.

One of my favorite shows, professional and amateur, that I ever saw was a high school performance of Much Ado About Nothing that was set in an early twentieth-century suffragette household that played with and changed the usual character dynamics and genders, all without changing a word of dialogue. What was most impressive was that the students entirely took credit for the concept as their original interpretation and production. If a high school theater team could imagine such an intriguing take on the remarkable comedy, Hollywood big shots are surely capable of putting together something formidable. Despite the infamous inaccessibility of Shakespeare’s plays, moviegoers and filmmakers should consider the power and possibility behind these timeless works.

After all, they’ve been around this long for a reason.