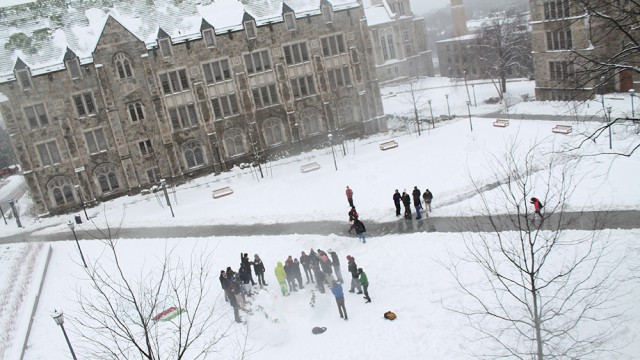 Two Snow Days In a Row – While the second day off looked possible, it wasn’t a sure thing. I mean, Harvard didn’t get the second day off. Who knew what was going to happen? Then, we got the text. Not only did it mean that there was another day to sit around and actually spend time with your roommates, watch endless episodes of the latest TV binge on Netflix, or just catch up on all that sleep, but it also meant that there is only a two-day week ahead of us before another two-day break. And that’s something to celebrate.

Snowball Fights in the Modlot – What an epic way to start the snow day. Students came out in droves for this Facebook organized event, decked out in ridiculous outfits and ready to start chucking some snow around. Of course, several participants were more concerned with getting the perfect Instagram than actually fighting, but many were there just for the fun of it, and that’s what the most important thing is.

Dining Hall Heroics – Hats off to BC Dining. The crew that kept the dining halls open well into the night during the worst part of the blizzard deserves nothing but our upmost respect. They slept here overnight to serve us in the morning, for God’s sake. Not only did they keep things open, but they changed up the food options, and even added new pieces to the menu that were too punny not to notice. The Snowplow Burger? We’re sold.

No School – We’re still waiting for our refund from Mother Nature. After two days of no school, we lost exactly $555.58 worth of tuition that we won’t get back. Yeah, look, we’re with everyone else when it comes to being psyched that things were cancelled, but we’re here to learn, and when we lose money on that, some part of it gets to us.

Not Being Outside – the snow is bitterly cold, and the meteorologists did say to stay indoors. But, after 20 hours of staying curled in a blanket burrito watching another episode of How I Met Your Mother or Friends, it’s possible to get a little stir crazy. It’s not that we’re not thankful for this time off, but soon, staring at a wall seemed like the most productive thing to do with our time, and that’s when we started to think that maybe it was time to bundle up and brave the elements. For our sanity, of course.

juno
A Tribute To The Bard: His Words and Wisdom
Signs Of Unity At Boston College