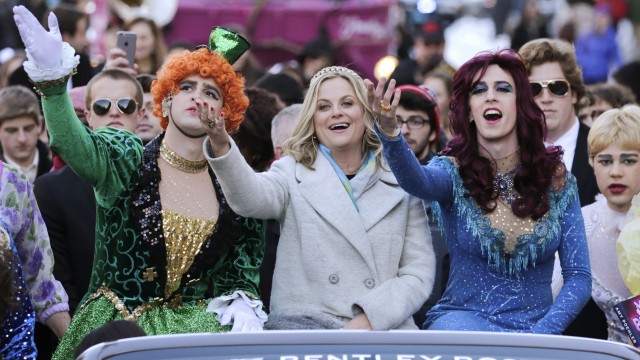 Holyoke Street was littered with camera flashes and raised iPhones on Thursday afternoon. Just two days after Cambridge and the greater Boston area was hit with over 24 inches of snow, hordes of excited students and residents lined the cobblestone side street to see Parks and Recreation Star and Boston College alumna, Amy Poehler BC ’93, parade through the city.

Led by Poehler, 42,  the parade was presented by The Hasty Pudding Theatricals, the oldest theatrical organization in the United States, as a part of its Woman of the Year Festivities. The Woman of the Year award, given annually, is The Hasty Pudding Theatricals’ oldest honor and highlights individuals who have made a meaningful impact on the entertainment industry. Previous winners have included Meryl Streep, Anne Hathaway, and Julia Roberts.

Poehler, a Newton, Mass. native, graduated from BC with a degree in media and communications in 1993. While at BC, she was a member of My Mother’s Fleabag, America’s oldest collegiate improv comedy troupe. After graduating Poehler moved to Chicago to study improvisational theater at Second City, and she joined the cast of Saturday Night Live in its 2001-02 season. In 2014 she won a Golden Globe for Best Actress in a Television Series (Comedy) for her character “Leslie Knope” in Parks and Recreation.

Poehler recently published her memoir, Yes Please, which made it to the top of the New York Times Humor Best Seller List. Jessica Marenco, GSCSOM ’15, ventured to Cambridge for the parade because of how much she enjoyed Poehler’s first book.

“I’m a big Amy Poehler fan, I love all of her shows and just finished her book,” Marenco said. “I would love if Amy came to BC, I think she has a lot of fans there, but I understand her reasoning.”

Although the award-winning actress currently maintains a distant relationship with the University, per local news outlet Bostinno, she did don a BC baseball hat during a portion of the event’s press conference.

Following the Woman of the Year Parade, the award-winning actress was roasted by The Hasty Pudding Theatricals and then awarded her celebratory Pudding Pot at Farkas Hall, the group’s historic headquarters since 1888.

Next week, the “festivities” will continue with the presentation of Hasty Pudding’s Man of The Year Award to Poehler’s Parks and Recreation Co-Star, Chris Pratt.