Home » Dining In: Feeding Boston College Through The Snowstorm 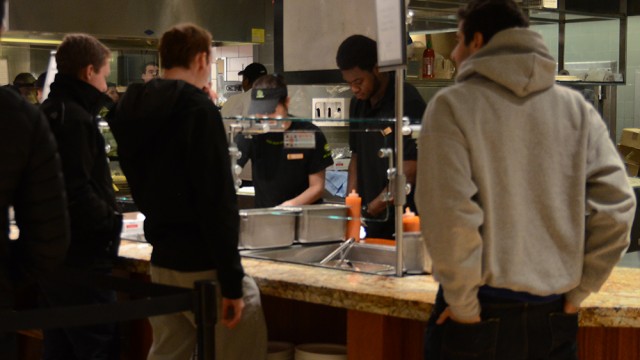 Dining In: Feeding Boston College Through The Snowstorm

Nearly 50 Boston College dining employees gathered in spaces across campus on Monday night and hunkered down for the night—sleeping on top of portable air mattresses as Winter Storm Juno dropped over 20 inches of snow on campus, and a state-wide travel ban prevented employees from returning to their homes.

Beth Emery, who is working for her first year as director of Dining Services at BC, praised the efforts of BC Dining employees and student-workers, who sacrificed their beds and time to ensure that the dining halls stayed open.

“We had about 50 workers stay overnight on air mattresses,” Emery said. “Lower staff stayed in The Heights room, Mac staff slept in the faculty dining room, and Newton staff stayed in a faculty lounge.”

Employees from Addie’s and catering filled in positions in Corcoran Commons and McElroy Commons, while student-workers also worked extra hours—using ScheduleFly to quickly sign up to work shifts across campus.

This was not the first time dining employees had to stay overnight. The last time this occurred was during the 2013 Boston Marathon bombings, as the University was on lockdown in the manhunt of the accused marathon bombers.

Over the past two days, Emery noted that several students went out of their way to help BC dining staff, offering air mattresses to dining hall employees. “We already had air mattresses for our workers, but it was a very nice gesture,” Emery said.

BC Dining Services made subtle changes to its menu in order to make, serve, and prepare food efficiently with less staff on hand, said Emery. A common trend seemed to be limiting options for students to completely customize their dinners. Instead of offering the traditional mac-and-cheese bar with make-it-yourself choices, BC’s dining halls provided three different pre-mixed styles of mac-and-cheese. Pre-mixed stir-fry noodles were also available at Wok Away on Tuesday night.

While the wind and snow were whipping outside, BC Dining employees in Corcoran Commons concocted a special wrap dubbed the “Blizzard Bomb,” comprised of ham, turkey, bacon, lettuce, tomatoes, pickles, and banana peppers in a wheat wrap slapped with chipotle mayo.

When asked about the snowstorm special, Corcoran Commons Dining general manager Derrick B. Cripps had one word to describe the choice: “marketing.”

Cripps explained that the wrap featured some new toppings, which BC Dining wanted students to experience for the first time. Cripps added that his staff  is continuing to experiment with pre-made specials, so that people know what they want to order immediately when they get to the front of the line.

“What we don’t want is kids getting to the front of the line and hesitating about what to order, which slows things down for everybody,” Cripps explained.

Cripps said BC Dining hopes to carry out more pre-made specials in the future. The staff has already had success with its pre-made special sandwich called “The Screaming Eagle,” which was featured in The New York Times.

While BC Dining ramped up efforts, several students took feeding themselves into their own hands. While many ventured to the dining halls to scrounge for food, some remained in their dorms during the blizzard, eating various dorm food essentials.

“The store was pretty crazy,” said Caroline Fernandez, CSOM ’17, who took the B-line to Star Market on Monday afternoon and bought essentials like chips, guacamole, and tuna—just in case she didn’t want to walk to the dining hall in the snow. “You’d think some kind of apocalypse was about to happen. Almost all the bread was gone, the store was packed with people, and I wanted in line for like 20 minutes before I got checked out.”

Other students voiced their concerns as they pursued other means to procure food in preparation for snowstorm Juno.

“We’ve been having chips, and we went to On-The-Fly, which was pretty picked-over,” said Lauren Santilli, CSOM ’17.

Tom O’Boyle, A&S ’17, ventured to Wegman’s for food. “I got Bagel Bites, which is basically the taste of Tuscany straight from your microwave,” he said.

food BC dining snow day white noise
Voices From The Dustbowl: ‘If All BC Buildings Got Into A Fight, Which One Would Win?’
University Works Tirelessly To Keep Up With Juno