Home » University Works Tirelessly To Keep Up With Juno 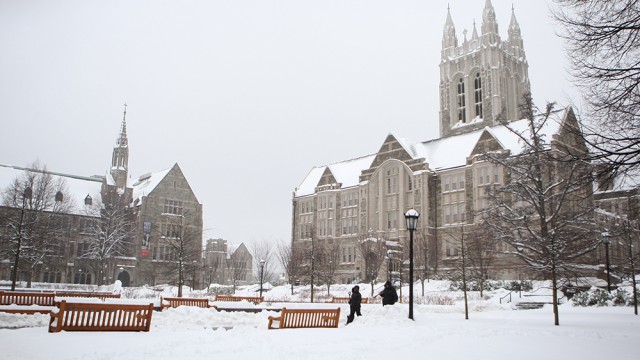 University Works Tirelessly To Keep Up With Juno

As Winter Storm Juno rocked through the Greater Boston region, the University made the decision to cancel all classes Monday night, as well as Tuesday and Wednesday of this week. The city and its surrounding suburbs ground to a halt, the snow accumulation as high as three feet in parts of the region. Many roads were impassable due to the storm, forcing Governor Charlie Baker to issue a travel ban for Tuesday. Baker lifted the travel ban effective midnight Tuesday, but encouraged citizens to travel only if necessary.

These difficulties created by the storm necessitated a strong response from Boston College, and the University met the challenge decisively. In past winter storm events, BC has been slow in announcing the cancellation of classes—a decision often credited to a desire to prevent excessive partying in University dorms.

During this storm, however, BC listened closely to directives from the Governor’s office and recognized the dangers in compelling students and professors to travel to class during the storm. It made the right decision at a proper time Monday afternoon to cancel classes for Tuesday. Acting cautiously, the University also canceled most Wednesday classes. With the travel ban lifted, it was BC’s prerogative to hold classes. Again, the University should be commended for making the decision to cancel at a proper time. A cautious response from the city of Boston and its universities severely limited the number of casualties from the storm and helped in the prompt cleanup of city streets.

The University went into overdrive on these days of rest for students. Residence directors sent emails to their respective students, keeping students well updated and also redoubling efforts to keep dorm buildings safe. Resident Assistants and members of BCPD were vigilant and focused on enforcing policies. There were five student hospitalizations during the unexpected break from campus, but overall, operations went smoothly in the residence halls.

BC Facilities and BC Dining Services are two of the many examples of the University doing its best to serve the student body. Facilities worked through the night clearing walkways, stairways, and roads in order for BC students and employees to get around campus. Multiple snow vehicles could be seen at any moment working around campus. Snow was cleared frequently, with pathways around campus relatively safe for travel through most of the storm. BC Dining Services works with similar dedication as many employees sacrificed time home with family to stay on campus and serve the BC community during the worst of the storm. This was a tremendous asset to the University’s emergency efforts. Those who committed to work on Jan. 28 slept overnight in dining halls, and even with the compensation of double-overtime pay, this was still a great sacrifice.

Although certainly a less-than-desirable situation, this “historic” storm was made a little more manageable thanks to the University’s workers and residential staff.