Home » An ‘Encore’ For The Dance Organization Of Boston College 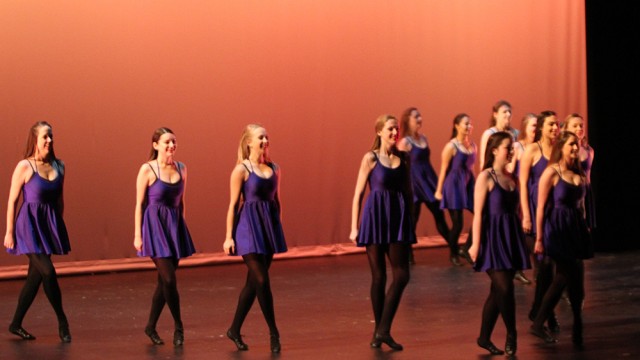 An ‘Encore’ For The Dance Organization Of Boston College

With dance shows, the story is often as grand as you want to make it. The show could be about loss, betrayal, the human condition, water, etc. as bodies fly and twist across the stage. The absence of a single narrative opens the subjects to a range of interpretations.

That being said, ENCORE, presented by the Dance Organization of Boston College (DOBC), had a pretty clear story: celebration, uncoincidentally told through dance. The show had endings on its mind as it explained in the playbill and also evident in the butterfly projected onto the ever shifting background. The butterfly could represent the end of life in a cocoon, the beginning of life as a butterfly, or something altogether different. Honestly, it was difficult to extract too specific a meaning from ENCORE when the show shot out number after number in quick succession.

With occasional help from the Boston College Irish Dance group and Fuego Del Corazon, DOBC put on a fast paced show of vivid breadth that was fun enough that it didn’t have to really mean anything too particular.

Colors added a grounding to the performance, working as a setting for the show. This dynamic was most effectively used in “Earth” a little more than halfway through the set. The dancers shifted in and off stage, changing the numbers to the setting of a pale blue background. Somewhat ironically, “Earth” looked a lot like water.

Shadows also made a sly appearance in “Youth.” In critical points in the performance the shadows of some of the dancers were projected onto the side walls of Robsham. Whether this was intentional design or not, it added a dimension to the piece that few others produced.

“All These Things That I’ve Done” set to The Killers was about as explicit as the show got. It featured the dancers ripping off their costume aprons to the line “I got soul, but I’m not a soldier,” an act met with thunderous applause. It worked well, not just because the clever choreography from Hannah Dodge, CSOM ‘15, matched the song as it built back up to the chorus, but because the show was rarely that explicit.

Other sets fell far from easy interpretation. The very next set “Cavalier” set to the song from Vincent McMorrow carried a similarly frustrated emotion but did it in a much more ambiguous way. The six dancers threw dust around a lone chair and almost seemed tugged back and forth and around the chair. Choreographed by Elisa Bushee, A&S ’16, the piece gave that foreign but familiar sense.

Sticking with the pieces that fell into ambiguity, “I Put A Spell On You” choreographed by Jenna Taylor, CSON ’18, seemed purposively disturbing yet, in its own kind of creepy way, enchanting.

The opener of the second set, “Feeling Good” to Jennifer Hudson’s song wasn’t the most emotionally riveting piece of the show, but it had the design and tone of a James Bond opening—the elaborate credits at the beginning of a 007 film. And so, in jump starting the second set, it did just fine.

The Irish Dance group got in on the action for a couple performances throughout the show and their simplicity was a pleasant contrast to some of the big show’s more elaborate productions. The Irish girls were more than happy to tap in and around each other for a couple minutes.

Similarly, Fuego reminded us that dancing makes you really cool.

There were performances that, for a moment, made you forget that BC is a Catholic school. Pieces like “Fever” gave the show a sultry spark.

One of the funniest pieces of the show was “Womanizer,” choreographed by and featuring Andrew Troum, A&S ’16. In “Womanizer,” Troum was lifted, stripped, and “slapped” by his female counterparts. Troum was especially expressive and carried the dynamic well.

“Home” set to the Mumford and Songs track appeared early in the second set, but for all intents and purposes was the emotional culmination of the show. Choreographed by Jenni Manion, CSOM ’15, “Home” was a soothing journey, that “everything is alright” moment.

After all the apparent pathos through the show–its bright colors and elaborate coordination–ENCORE brought us back home with high powered final medley. The final encore wasn’t a tortured or provocative affair. It’s just how DOBC says so long.

‘Project Almanac’ A Found-Film Failure
In Defense Of Summer Finn