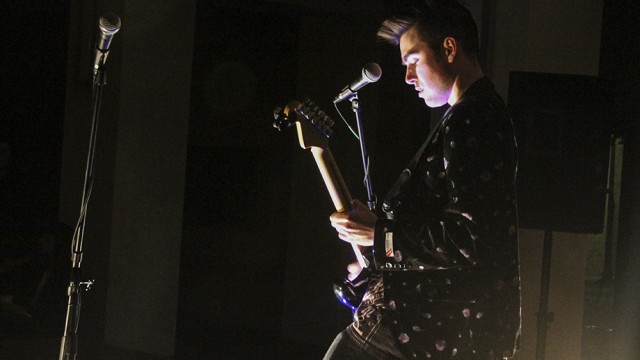 The camera moves through the dimlit room, with drums beating in the background. William Bolton, CSOM ’16, is at work in his music studio, several posters and some Christmas lights in the background. Moving from the drums to the microphone to the recording equipment, the camera gives viewers a five-minute sneak peak into Bolton’s process for making music.

This past week, Bolton posted “Summer Breeze,” the first in a series of behind-the-scenes music videos featuring his original work. This installment captures the creative process behind the title track off his album released at the beginning of last semester, Summer Breeze. The video features Bolton on both the guitars and the drums.

Bolton, who lives off campus, filmed the video series in his home studio. He wears his own clothes—in the “Summer Breeze” video, he’s wearing a camo-print jacket and a gold necklace.

“I thought it would be really cool to show people the process of how I make my songs, and give them a live studio performance,” Bolton said. “I could definitely see myself dropping 20 videos on my channel this year.”

So far, Bolton has filmed five of the videos set to be released weekly. He said that the videos only take about an hour to film but that the editing process takes much more time.

All five of the videos he has already made are from Summer Breeze, but he hopes to write some new songs for the project and also cover some from other artists.

“I’m probably going to explore a bunch of the ideas for different types of videos,” he said. “I’m just trying to get creative with it.”
Music videos have been getting better each year, Bolton said, with visuals from Action Bronson, J. Cole, and Joey Bada$$ among his favorites from this year.

“I just really enjoy music videos that have cool stories,” he said.

Bolton describes the process of making these videos particularly simple, equating their filming to a live performance.

“I’m just performing the song that I wrote, so its pretty natural,” he said.

He has also enlisted the help of Nick Cangello, a freelance filmmaker from Worcester, throughout the process. Bolton is no stranger to the process of making music videos. He has a channel on YouTube, he said, where he has posted all of his more traditional style music videos. “For those we typically shoot some kind of storyline and try to make them like short films,” he said.

He hopes that his new behind-the-scene videos will expand his fan-base. Bolton describes the response to the series as being quite positive so far. “There’s definitely going to be some improvements made so that we can make it better for next time,” he said.

While in the midst of his current project, Bolton continues to look for new opportunities and ventures. He will be shooting some full-production music videos in Los Angeles, Calif. this spring. He will also be releasing a new musical project called “Love Supreme,” and is looking to tour nationally this summer.

“I’m just looking to show some behind-the-scenes footage of how it’s all made because it’s a fun, cool process,” he said.