Home » Giving A Voice To The Differently Abled 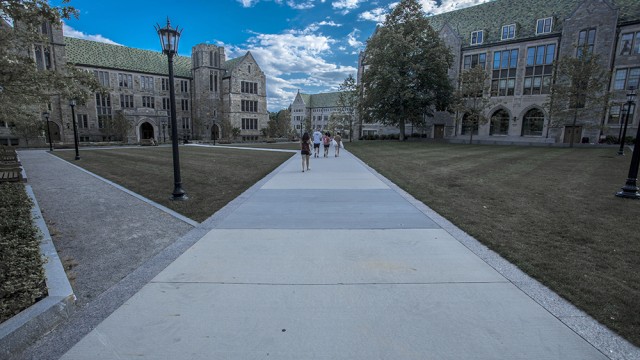 Giving A Voice To The Differently Abled

The newly created Council for Students with Disabilities held its first official event on Tuesday. A town hall meeting focusing on physical disabilities, this initial gathering was led by chair Phoebe Fico, A&S ’16, with the long term goal of increasing accessibility for all people on campus. The Council was formed by the Undergraduate Government of Boston College (UGBC) under its Division of Diversity and Inclusion.

A Council created specifically to promote the rights of students with disabilities is a sign of progress in a longer campaign to increase ease of access in Boston College’s spaces. This council has the potential to educate students so far unengaged in the movement, opening doors for all students to advocate for a more easily travelled campus.

It’s worth noting, however, that students who do show up for panels and town hall events are often already invested in the issue discussed—it is less likely that students who know little of the problem will attend a meeting to solve it.

BC Ignites is one potential model to examine as a mode to engage the maximum number of students. Last semester, UGBC hosted a successful BC Ignites on the topic of mental health. The event, which took place on O’Neill Plaza, attracted students from across the University. Much of the effectiveness of BC Ignites is that it happens in the middle of campus and catches the interest of passing students. Unlike a meeting or panel discussion, its format encourages students to stop and listen for as long as they can.

Open forums that engage and educate more of the student body would be an effective way to start a cultural shift on campus to run alongside the physical improvement to the University already in the works. It is easier to build new paths than it is to change attitudes on campus. The school can rebuild its infrastructure, but in the long run, it is up to us as students to work the rest of the way there.

UGBC
The True Scourge Of Super Bowl XLIX: #ConflateGate
LTE: A Response To “Signs Of Unity At Boston College”