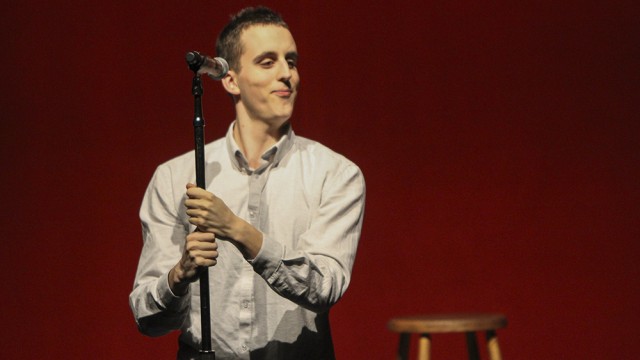 To build on the success of the Be Conscious campaign—launched in the fall semester to address issues of mental health at Boston College—UGBC and To Write Love on Her Arms (TWLOHA-BC) continued their efforts to de-stigmatize issues of mental health at the University by bringing Kevin Breel to campus last night. Breel, a comedian who has struggled with depression, shared his story in a TED Talk that has been viewed over 3,000,000 times, and he has become internationally known for his mental health activism.

At just 21 years old, Breel succeeded in conveying experiences that are relatable to many BC students. The fact that Breel is a young comedian who, outwardly, does not fit conventional stereotypes of those facing mental illness adds to the effectiveness of his visit to BC, a school where students are quick to list achievements in academics and extracurricular activities, but less likely to be open about some of their struggles. Students on a campus such as this one could be hesitant to address mental health issues publicly, as these struggles often come with a taint of weakness or failure that does not fit into their neatly polished image.

It is clear, however, that any students dealing with issues of mental health at BC are not alone in their experiences, as University Counseling Services has indicated that approximately 25 percent of BC students use the office’s services at least one time before they graduate.

A presentation such as Breel’s contributes to the ongoing initiative to open more public dialogues about mental well-being at BC, facilitated by groups such as UGBC, TWLOHA-BC, and the Asian Caucus, the latter of which introduced Silver Week to raise issues of mental health. Students struggling with mental illness should never be forced to openly share their personal experiences if they do not feel inclined to do so. They must, however, be accorded a social environment that enables them to seek support and, like Breel, tell their stories in the manner in which they feel most comfortable and least stigmatized.