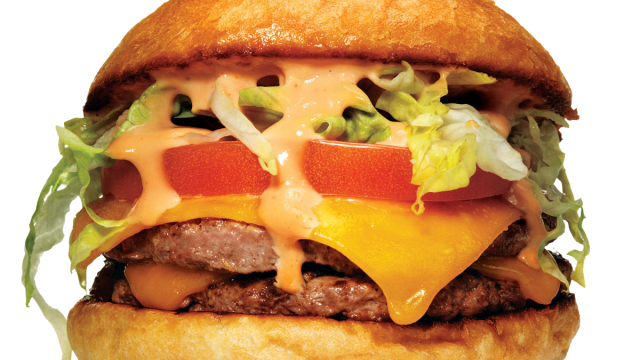 Harvard Square boasts an array of restaurants serving up iterations on the “classic” hamburger, but Flat Patties is looking to separate itself from the competition with its fresh ground beef, hand-cut fries, and potato buns.

Located on Harvard Square’s flagship Brattle St., Flat Patties has been serving up the “Best 10 dollar and under burger” in Harvard Square since its inception in 2005, according to Boston Magazine. Flat Patties has evolved from sharing space with Felipe’s Taqueria to claiming its own place at 33 Brattle St.—sporting an intimate upstairs area where customers can listen as patties sizzle below.

“You’ll notice here we serve it on a plate,” said Tom Brush, the director of Flat Patties and co-owner of Felipe’s Taqueria. “Here, you’ll notice there’s a lot of nice little touches.”

Once customers step inside the restaurant, the home-cooked sensation a customer feels as he or she is served one of the freshly ground burgers at Flat Patties ties into Brush’s restaurant philosophy. Brush hopes to perfect one single restaurant in order to grind out the best experience possible, combined with the theme of a “down-home burger.”

“My whole theory on restaurants is you do one, and that’s it,” Brush said. “There’s no such thing as a restaurant that gets better as they get bigger or expand. Something gets lost.”

While the ground beef churned out daily onto mashed potato brioche-like buns is the most popular menu item at Flat Patties, the restaurant also offers several other well-known, decadent items on its accessible menu. According to Brush, the restaurant’s ice cream is a “killer, made from scratch” dessert that comes in forms of frozen custard and milkshakes.

Flat Patties hopes to surprise the customer with homegrown, cozy touches, while also offering high quality food and a surprisingly large selection of menu items. The homemade burger “quick-serve” restaurant separates itself from competitors by doubling as a homespun ice cream shop.

“We make, from scratch, our own homemade frozen custard,” Brush said. “It’s ice cream, but it’s a high-density ice cream. It’s not whipped with a lot of air. Most ice cream has a lot of air that fluffs it up, but it’s more like gelato. It’s churned slower, and it also has a higher egg content.”

Aside from the meat itself, Flat Patties is cooking up some exceptional buns and sandwiches. “We sell a lot of pulled pork,” Brush said. “We also bake our bread from scratch every morning, and mashed potatoes are the moisture and body of the bread.” These airy buns nearly resemble popovers in texture complement the fresh ground beef perfectly. To cater to the entire spectrum of customers walking through Flat Patties’ doors, the restaurant also features a popular veggie burger.

“They’re amazing,” Brush said. “They’re bound together with oats and egg, and there’s a little bit of cheese in them. It’s zucchini, carrots, and onions, and it’s a really good veggie burger homemade right here.”

As a staple in Harvard Square, college students make up a significant chunk of Flat Patties’ customer base. The restaurant welcomes a nightly influx of students attracted to sub-five dollar prices of burgers and a $3.50 milkshake. Looking to the future, the restaurant hopes to continue catering to its college student clientele, as well as building off its various menu options.

food harvard square
The Sounds Of City Snowfall
Boston Versus New York: A Look At The City’s Hidden Gems