Home » Mod of Cards: A Close-up 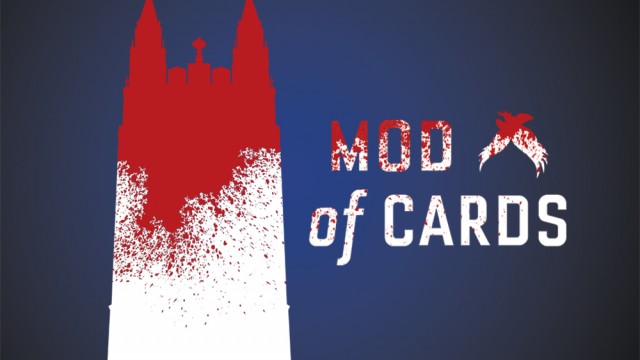 Mod of Cards: A Close-up

It’s 10:30 p.m. on a Tuesday night, and Foster St. is fake-throwing down. Girls are in their “going out” outfits, and guys have on their fancy boots. It’s an eerily familiar and foreign scene. The noise slowly rises without a deafening bass to absorb the usual party conversations.

There are more than a few details that set this gathering apart from the usual Tuesday night rager. Derek Switaj, CSOM ’15, mingles his way through the group’s separate cloisters, wrinkled script in hand. Max Prio, CSOM ’16, is set up behind the bar not with drinks, but rather a camera attached to a slider, ready to track across the landscape of the scene. His partner in cinematography Ryan Reede, A&S ’16, is set up not far to his right his own camera at the ready.

Prio cuts off the giddy crowd, noting the absurdity of the situation before asking the crew of extras to keep the noise to a minimum, effectively cutting it out all together. “You can talk to each other,” he says. “But don’t make any audible noise.”

And the shooting for the second scene of the second episode of Mod of Cards begins. Prio, in an Exposure Productions long sleeve tee shirt, delicately pulls the camera across the tracks on top of the bar as each section of the crowd has its own action to make. Finally, the camera rests as Ben Halter, A&S ’16—who plays the infamous Frank Underwood, the star of the show—makes his turn into frame. He leans against the bar and gives his aside to the camera.

It’s a move Mod of Cards has in its short time become known for—drama within familiarity. And at the helm are Switaj, Reede, and Prio. Prio and Reede, of Boston College’s media startup Exposure Productions, lead the show’s principal photography and editing, while Switaj serves as writer-director.

The Heights sat down with the three before their shoot on Tuesday to discuss the upcoming release of Mod of Cards’ second episode and the show’s production as a whole.

On the first episode’s reception

Prio: Right off the bat, we got a lot of great reception.

Switaj: The funny thing was the quality. A lot of people were impressed with the quality. These guys did such a good job with the cinematography.

From the story perspective, the funny thing for me was people coming up to me with two totally different perspectives like, “You guys totally nailed what BC student drama’s like and student government is just like that.” And I had people telling me, “Oh you did a good job but that’s not what BC is like.” And that’s two very different perspectives. It’s funny how depending on your perspective on BC and what you do hear, for some the show felt scary real and some because it was fake drama.

Reede: I guess it depends on if people have seen House of Cards or not. The first episode is really similar (to the original) and then we branch off from there. So a lot of people who didn’t see House of Cards were like, yeah I liked it, but I didn’t really understand what was going on, because there’s this net of character relations that you kind of understand immediately if you’ve seen House of Cards and that have to develop—which they do.

On the show’s release structure

Prio: That was part of the strategy with releasing the first before Winter Break. The one by itself is so disconnected from the rest of the story. We don’t really develop much of the drama in it. We just present the climate of where everything is gonna happen … you didn’t miss any drama if you didn’t see it. Now that we’re bringing it back for the second semester, it’s when the drama is really gonna start happening and you’ll start understanding who some of those characters are.

Prio: It was kind of something we just decided we’re gonna have to live with. If we were legitimate, and we had a budget and we had all the time in the world we would have waited until spring to shoot. But it’s a reality of it all. We go to school from fall to barely even spring, before we get warm weather and we knew it was going to happen. We were lucky enough that we got so much of episode two shot without snow in it but then all of a sudden snow came. Spoiler alert: you’re gonna see continuity errors—snow—it’s going to be there and then it’s not gonna be there.

Switaj: And you know the nice thing is we were able, to an extent, re-write some scenes in the later episodes—so three, four, five, and six I’m not expecting many issues. I mean, from an suspension of disbelief you can get a snowstorm in March … and there’s no definite timeline in which the story occurs in each of our episode. Episode five, for instance, takes place in one entire day. All the other episodes happen over a course of days.

On the move from D.C. to BC

DS: There’s a reason why pretty much every story’s been told, since 3,000 B.C. They’ve just shifted and they have new connotations and new culture and new people. So really taking political Washington D.C. and political Boston College fake drama and our UGBC really isn’t that different from a story perspective if you understand it well … and just being here for four years, it clicks with how it fits.

On the move from Exposure to ‘Mod of Cards’

Prio: Part of why we took on this project in the first place, when Derek reached out initially to Ryan and then to me, we and Exposure as a whole were kind of getting kind of bored with the typical promo videos. They weren’t anything that were outright creative on our part.

This is going to be our time to shine creatively as far as cinematography and using all the tools that if you’re not involved with film you don’t really understand how many tools we have to manipulate things with. There’s so many ways to create emotion and imagery and messages with the position of your camera, the position of the lights, the shadows you create, the sound, so many different things that actually go into the production of it, that yeah, it’s been very refreshing to have that liberty to move our camera around where we don’t do it in Exposure work.

Prio: It’s a lot more fun to work with multiple cameras that are all moving. We just have more time on set to plan, storyboard, and execute, so we kind of know going in where we are going to have the lights, how many cameras we’re going to need. We can really be a lot more creative with dynamic shooting, moving the camera like they do in House of Cards and getting vertical pans, horizontal pans, rack focuses—things that often take us a couple takes to get down.

If you pay attention to how the show progresses, I hope as something we’re trying to do more you’ll notice a lot more of these artistic flairs that me and Ryan are putting on it. For a while we were stuck in our Exposure nature, but now we’re putting in the effort to use a bunch of tools we haven’t used in a while so you’ll see a lot more camera slides and see vertical and horizontal moves with the camera and it’s just been a blast. Me and Ryan have over our lives 15 years of experience doing all sorts of different work so it’s nice to finally take some of that and bring it back to the fore front.

On the two Franks

Switaj: I think part of the fun of that character is Frank in House of Cards is a sociopath. He has very little empathy or none … in the original script of the pilot episode Frank is described as King Richard III, Iago, and Hannibal Lector rolled up into one person—that’s a pretty clear cut picture of who Frank is.

So when you take Frank and you boil him down to the college level, and all the characters to an extent, we’re trying to figure out what would these characters look like if they aren’t developed as a person yet. If they’re still in their formative state, formative time in their life, you know our Frank isn’t a full sociopath yet, but as the episodes go along you see, “Oh, there’s some tendencies.” You think, “Oh, I can see how he could grow up into grown up Frank.” Same thing with Claire … I think the key was figuring out what are the most important traits in these characters in the show and when you filter them down to the college level.

Why is Frank motivated? For him, in my mind it’s pride. He is, I think, in the early stages of a little bit of sociopathic tendency but I think it’s also just pride, too. He feels like he’s been wronged and he wants to right the wrong. Traditional hubris, right?

On working with primarily theater actors

Switaj: That’s been one of the most fun things for me directing just working with the actors. I came from a theater background. The biggest difference that I see, and it was very apparent early on with our actors, is when you’re acting in theater you’re acting for an audience so you’re projecting—all of your motions are exaggerated—everything you’re doing is making minute things present on a large stage. So now when you put a camera in someone’s face, you see every little tick, every little twitch, every little smirk, every little smile. It’s the small movements that rule in film and it’s the big ones that rule in theater.

So that was a lot of the early Mod of Cards shoots, just open dialogue … At the end of the day, the actors want to look good for their sake. I want them to look good for the show’s sake. So the better I am at catching when things are off or when theater tendencies are coming into it that helps everybody … A lot of film is acting through the eyes, acting through the small smirks, and I just particularly enjoy that so it’s been interesting.

Max said earlier that part of this is building that family, so it’s fun to see your brothers and sisters and everybody changing and growing and learning.

house of cards mod of cards
‘Thrones’ Came To IMAX, Then Went
“Parks And Rec,” The State Of The Union, And Us Somewhere Inbetween 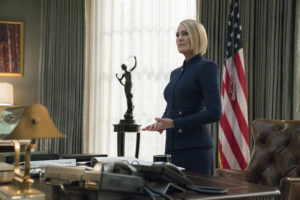