Home » Sprayable Energy: Caffeine You Can Spray On Your Skin 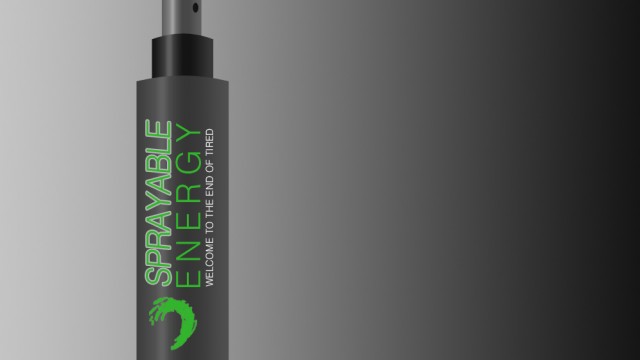 Sprayable Energy: Caffeine You Can Spray On Your Skin

Most people get their caffeine fix by drinking coffee or energy drinks. Harvard dropout and young entrepreneur Ben Yu has found a different solution: spray-on caffeine.

Yu himself has never been able to drink coffee without experiencing discomfort, explaining that some people metabolize caffeine slowly because they lack a certain enzyme.

“When I drink coffee, I feel like a zombie,” Yu said. “I can’t sleep, I can’t think. This had always bothered me.” Yu’s negative reactions to coffee prompted him to develop a product that gives users smooth, focused energy minus the downsides of energy drinks and coffee. Sprayable Energy has no calories, sugars, chemicals, and does not induce jitters or a caffeine crash. According to Yu, the pocket-sized product is both a healthier and more effective alternative to coffee and energy drinks.

Before dropping out of Harvard in 2011 and starting his company, Yu was studying biochemistry. Yu took a leave from Harvard while waiting to see if he’d received a prestigious Thiel Fellowship, which grants students $100,000 to focus on their work and research outside of their university. Once he received the fellowship, he left school to work on an e-commerce search engine, which he later set aside to develop Sprayable.

“To college students who are aspiring entrepreneurs, I say go for it. This is the best time in your life to try something you want to do.” – Yu

“Fear of failure and uncertainty often keeps people from trying new things,” Yu said. “But in the end very few people regret the choices they make and the lessons they learn when coming down this path. That being said, it is incredibly difficult. Though there’s no clear path to success in entrepreneurship, remember that you can always bounce back at this age when you’re young and for the most part responsibility-free.”

Yu met Deven Soni—later to become his equal partner and cofounder of Sprayable—on a social cruise for entrepreneurs and investors. Soni had been working in venture capital and investing in startups in the Bay Area, and the two became fast friends. They later applied for a program called Startup Chile, in which the government in Santiago gives entrepreneurs a $40,000 grant to bring their ideas to Chileans. In Chile, Yu and Soni discussed the feasibility and desirability of the Sprayable idea.

“We had to do a lot of research to make sure there was actually a demand for a product like ours,” Yu said. Once he decided to partner with Yu, Soni had to figure out the regulatory status of the product, build a team, and find manufacturers. Meanwhile, the development of the product was underway.

Yu’s father, a chemist, had been working with transdermals—medicines that go through the skin—and became the chief science advisor for Sprayable, helping bring his son’s idea to life.

Yu knew that caffeine can pass through the skin and be absorbed gradually over time. According to Yu, this technique is healthier than ingesting because it naturally regulates the dose that enters the body.

“The two main groups who love the product are those who are sensitive to caffeine or are having health problems, especially stomach-related issues,” Yu said. By being absorbed straight into the skin, the caffeine bypasses the digestive tract and goes straight into the bloodstream.

Over a year was spent in the lab trying to develop a viable formula for Sprayable. An obstacle encountered in the development of the product was the low solubility of caffeine.

“In the spray, as opposed to in a normal cup of coffee or an energy drink, we had a lot less liquid to work with,” Yu said. “The problem was that we had a little water and a lot of caffeine, which is not that soluble. Our main issue was how to increase the penetration rate of caffeine.”

After raising over $100,000 through an indiegogo campaign in 2013, Sprayable was able to make its first mass production run, and has continued selling since.

“You definitely have to have some reason to keep going besides the tantalizing lure of success. Every startup goes through a bleak period, and if all that’s holding you together is the prospect of money and success then you will quit because there’s no reason to keep going.” – Yu

Business has been going very well for the company, with their products being sold in over fifty countries. In terms of advertising the products—which can be bought online—Yu said that word of mouth has been much more effective than online ads. The company has grown revenue-wise, team-wise—from a team of three to six—and also product-wise.

Now, the startup has launched a second product called Sprayable Sleep, which is basically spray-on melatonin. Yu believes that this product targets a much larger demographic than the first, by catering to insomniacs or anyone who has a melatonin deficiency.

“Melatonin is produced naturally by our bodies in response to darkness,” Yu said. “Now that we stay up late with artificial lights it completely disrupts our bodies’ ability to create melatonin. Sprayable sleep gets people to their normal sleep-wake cycle.”

Customers find Sprayable Sleep preferable to taking sleeping pills, which often contain additive chemicals. According to Yu, one of the greatest benefits of taking melatonin topically is absorbing it over time, rather than all at once as you would with a pill. This absorption through the skin mimics the body’s gradual release of melatonin, and helps regulate its circadian rhythm much more accurately.

“Energy and sleep are two things which largely determine the quality of a person’s life,” said Yu. “We want to create products that help people lead happier, more productive lives.”