Home » For Students With Disabilities, A Newly Created Advocacy Group 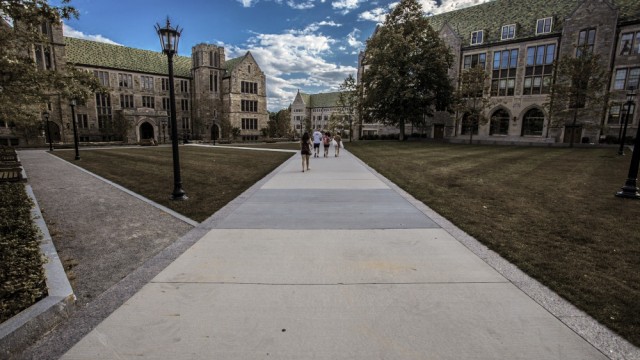 For Students With Disabilities, A Newly Created Advocacy Group

The newly formed Council for Students with Disabilities (CSD) hosted its first town hall meeting on Tuesday, with the issue of physical disabilities at Boston College as the focus of the event.

The council, established under the division of diversity and inclusion in the Undergraduate Government of Boston College (UGBC) in January, is headed by Phoebe Fico, A&S ’16, and was formed as an advocacy group for students with disabilities. The council plans to work toward removing obstacles for these students in everyday life at BC, Fico said.

“We’re really excited to expand and grow the council,” said Martin Casiano, vice president of diversity and inclusion and A&S ’15. “Thank you for being the trailblazers with us.”

In addition to Fico and Casiano, Paulette Durrett, the assistant dean for students with disabilities, spoke at the meeting. She has worked with students on the issue of campus accessibility for the past four years. Having previously advised UGBC, AHANA Leadership Council (ALC), and GLBTQ Leadership Council (GLC), she now works with students confronted with physical, medical, psychological, and temporary conditions that might limit their access to resources at the University.

A potentially complicated aspect of the support system for BC students with disabilities is that there are so many different places for these students to seek help that it’s not always clear where is most appropriate. Right now, there are four different offices that work with people with disabilities, Durrett said.

“It’s part of BC’s history and culture that if they see a need, they fill that need,” Durrett said. “Sometimes that need is filled without talking to other people.”

A large part of Durrett’s job is working with faculty and staff around student needs. For example, if a student needs to take an exam in the Disability Services Office because he or she needs extra time, Durrett will go and talk to the professor to show that this is a documented need.

Nanci Fiore-Chettiar, UGBC president and A&S ’15, expressed her excitement for the new council. This is an issue she is especially passionate about, she said.

When she was a freshman, she brought Keith Jones, an activist for people with disabilities who has cerebral palsy, to campus. The event was not particularly well attended, according to Fiore-Chettiar, and she hopes to bring him back this year, as well as establish other initiatives and policies.

“I’m really excited to have Phoebe here,” she said of Fico’s leadership on the council. “She’s super passionate.”

The group that focused on residential life focused on accessibility as well as the campus culture. It was noted that people at BC are often unaware of how students with disabilities navigate the campus. Although some things have improved in recent months, namely the accessibility of Bapst Library, there was a consensus that this is still a work in progress.

“There’s definitely a culture at BC where you should be healthy and fit and when people are not normal, there’s a social stigma,” said Christine Song, A&S ’18, who attended the town hall meeting. “I think the way to get rid of that stigma is more awareness and acceptance of other people.”

Next, the group that discussed academic life, support, and accommodations brought up troubles that come with living off-campus. The accessibility of science labs was also brought up by this section.

One final group discussed all three of the categories of accessibility problems, and indicated that BC needs to work as a group rather than placing the entirety of the issue on those affected.

Topographically, BC is a challenging campus to navigate for students with disabilities, noted group facilitator Brysen Boyd, A&S ’17. The University places an emphasis on diversity, but does not seem to recognize that people with disabilities also add to the diversity of the campus, Boyd said.