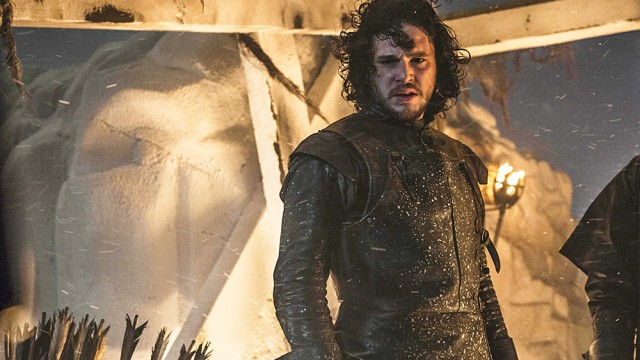 ‘Thrones’ Came To IMAX, Then Went

Whenever someone mentions they like Game of Thrones, I hate them—for a moment at least.

The problem with living week to week—aside from eight page papers flying out of closets you thought were safe and secure at least until the snow melted—is that you miss some cool stuff. It looks like I’ve missed the chance to see Game of Thrones in IMAX—it was always a fool’s hope.

The necessary background here is that HBO’s epic (and thoroughly expensive for us and them) fantasy series made its way to IMAX theaters over the weekend, earning $1.5 million in the process, which means the two episodes aired on HBO last spring was 10th largest domestic earner over the weekend. It’s some positive off-season press for the show that continually gets caught up in a “will it, won’t it” overtake the original books, in what has become a long and convoluted timeline of death and destruction. Basically, a bunch of people paid around $15 to see two episodes of television they could have easily pirated in their bed with some home baked cookies and their Bernese Mountain dog named Grey Wind.

Chances are that most of us missed it, because few college students are willing to pay $15 to see a movie in IMAX, unless The Hobbit is premiering at midnight. How many of us have cars to get to the only IMAX in the general vicinity at Jordan’s Furniture, which the T avoids like Daenerys Targaryen avoids a ship to Westeros?

Chances are I missed it, unless I pony up for a zipcar. Or if you read this, email [email protected], and pick me up after class for the last showing today, 4:15 p.m. at Jordan’s. I’ll run through as much Stark genealogy as I can on the ride over there. It’ll be fun.

Because who doesn’t do deep dives into iceandfire.wikia.com on the possible parenthood of Jon Snow or refresh and bolster their knowledge of various fictional family trees? Dear Daenerys Stormborn is the daughter of the Mad King Aerys and brother to fallen prince Rhaegar, whom past King Robert (ala first season King Robert) slew at the Trident. She’s called “Stormborn” because she was born during a storm at Dragonstone on the eve of her father’s defeat as she and her brother raced across the Narrow Sea to the Free Cities.

Whenever someone mentions they like Game of Thrones, I hate them—for just a moment. We all have our “things.” One of mine is I get to say I read Game of Thrones in the summer before 8th grade. I’d read more than 3,000 words of A Song of Ice and Fire, the series’ actual name, before the first episode even aired.

Sometimes, I feel guilty when someone in one of my classes talks about how much he or she (but I mean, common, a he) loves Jack Kerouac. Or if someone says they’re really into jazz. I think, well, maybe I shouldn’t have spent a cumulative two years reading George R.R. Martin’s books over and over again through the night. Maybe I should have read other stuff, gotten more into Hemingway or watched Avatar: The Last Airbender before I got too old to appreciate airbending. But can you name the seven major families in Westeros? Stark, Tully, Baratheon, Martel, Greyjoy, Arryn, Tyrell, and, least of all, the Lannisters. Too easy? What beloved book character who travels with Ser Barristan Selmy did the show infamously leave out? Strong Belwas.

Basically, we’re in my basement talking about knights and dragons. Well, actually I’m just talking, flailing excitedly at the map resting above the couch. “That’s why Robb Stark needed to go to the wedding, because his army would have been bottlenecked where the landmass narrows.”

You can have Hemingway and jazz. I’ll keep my imaginary direwolf, but maybe think about taking me to Jordan’s Furniture if you’re free after 3.

game of thrones imax a song of ice and fire hbo
As T Troubles Persist, A Look At Embracing The Aged System
Mod of Cards: A Close-up