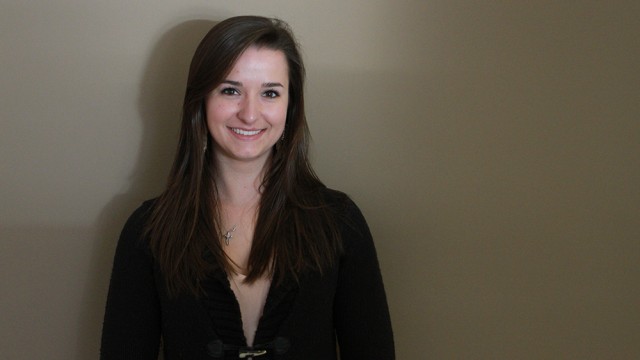 From initiating her own, highly lucrative summer camp at 9 years old; to coaching gymnastics throughout high school; to launching the University’s chapter of To Write Love On Her Arms (TWLOHA-BC) during her freshman and sophomore years and spearheading the Undergraduate Government of Boston College’s (UGBC) Be Conscious mental health initiative in 2014, Cassidy Gallegos, student initiatives coordinator of mental health, presidential candidate for the upcoming UGBC election, and LSOE ’16, has seemingly always been a trailblazer, pioneering miscellaneous leadership campaigns since her youth.

Born and raised as the eldest of four in Orinda, Calif., Gallegos founded Fun in the Sun when she no longer could attend summer camps personally. While the camp was originally based in her backyard and spanned a single afternoon of free, outdoor activities, the next year Gallegos decided to expand, asking for $5 from attendees to fund the program.

Ten years later, Fun in the Sun was an entrepreneurial success, with paid, teenage camp counselors supervising roughly 30 children during both of the two-week summer sessions.

“Honestly, I learned so much business knowledge from that experience,” she said. “I had to plan the budget, figure out how to make a profit, how to pay and hire employees—I even ended up writing college letters of recommendation for a couple of the counselors I hired. It really influenced the things I do now.”

When her own college application season rolled around, Gallegos had not initially considered BC a viable option. “I ended up applying to a lot of Jesuit universities without knowing what that meant, exactly,” she said. “Then, after BC did a session at my school, I was totally in awe.” Following her BC acceptance in December, Gallegos attended an Admitted Eagles session and fell in love with the University. “It’s such a blessing now that I’m here because of all of the great opportunities I’ve had.”

After her first semester in Massachusetts, however, Gallegos, an applied psychology and human development major with a minor in management and leadership, found that she did not enjoy the school as much as she had expected—in part due to the absence of conversation surrounding mental health. She felt as though an aura of perfection pervaded campus, as though anyone and everyone had his and her life together. “It was so far from where I was, you know?” Gallegos said. “I felt very, very distanced from the community.”

In light of her discontent, Gallegos decided to inaugurate a chapter of TWLOHA—a national, non-profit organization that aims to promote hope and provide aid for those struggling with depression, addiction, self-injury, and suicidal thoughts—at BC. “I just really think the initiative’s overall message of providing hope is a great one, and starting it was really just a way of bringing that message to campus,” she said. Gallegos worked diligently from the spring of her freshman year through the fall of her sophomore year to set the project in motion, officially instituting it and becoming its director in January of 2014.

Shortly thereafter, due to encouragement from Matt Alonsozana, UGBC executive vice president during the 2013-14 year and BC ’14, Gallegos was appointed into the SA in March and subsequently ran for and was accepted into student initiatives. “TWLOHA is really kind of the whole reason I’m involved in UGBC,” Gallegos said. “I kind of made a name for myself with this mental health project, and then there was this snowball effect.”

Last year, Gallegos was heavily involved in the UGBC campaign for the Lucas Levine and Vance Vergara, both A&S ’15, presidential team. She also became an inC (formerly Frosh.0) facilitator and partook in the PULSE program at BC during her sophomore year. “PULSE was a huge factor for my love of BC, definitely,” she said. She noted how PULSE, founded in 1969, was actually the brainchild of UGBC, descanting on the beneficial influence UGBC can have in the future.

As student initiatives coordinator of mental health, Gallegos has sought to increase dialogue related to stress, mental illness, homesickness, suicidal thoughts, and self-harm, while simultaneously breaking down barriers to authenticity. Together with UGBC, Gallegos helped lead and develop the Be Conscious initiative established during the summer of 2014 to raise awareness about mental health on campus, eventually launching the Mental Health Initiative blog—a website created by UGBC senator Alison Takahashi, A&S ’16, whereupon students can share personal stories and insights. During the fall, Be Conscious brought photographer Steve Rosenfield and his “What I Be” project to BC, a pictorial platform through which 70 students shared their personal insecurities in attempts to transcend societal conventions and promote honesty and diversity.

More recently, 21-year-old comedian and mental health activist Kevin Breel spoke to the University at Robsham Theater on Feb. 4 through TWLOHA-BC. “He talked about the importance of embracing imperfection to get the most out of life, and I think it’s so crucial that we communicate that going forward,” Gallegos said. She also serves as coordinator for BC CHATS (Creating a Healthy Atmosphere for Talking with Students), a campaign in collaboration with University Counseling Services that Michael Granatelli, A&S ’15, proposed to Gallegos and UGBC last year, which is coming to fruition this spring.

“I’m really trying to start dialogue about [mental health],” Gallegos said. “Like, I’m trying to put it in everyone’s face. But it’s not my only initiative.”

She then spoke about her support for the Black Lives Matter movement, those who are heavily involved in the mission, and similar issues of what she deems great importance. “It all comes back to encouraging difficult conversations—if we don’t do that, if we don’t confront issues, we’re just perpetuating the stigma,” Gallegos said.

Regarding her decision to run for UGBC president, Gallegos said, “Running was never really on my mind, at first … initially I didn’t completely understand the vast ability UGBC has to effect change.” She and her running mate, Michael Keefe, A&S ’16, first sat down in November to discuss a potential team together. “It comes down to the fact that we’re both doing this for BC,” Gallegos said. “We both recognize the special relationship UGBC has with the administration—we want to take advantage of that. I’ve thought about this a lot, and often, UGBC doesn’t have a great connotation for students … We are trying to make it a less exclusive, more active and dynamic voice for the student body.”

In terms of her overall experience at the University thus far, Gallegos said she has no regrets. “You know … there definitely have been learning marks along the way,” she said. “But I wouldn’t take them back … Had I not dealt with things in high school, maybe I wouldn’t be so into mental health. And, I love the mission of BC—the Jesuit ideals, the promotion of the whole person, men and women for others—I love it. However, I think there’s a lot that people might not necessarily love about the school, and I think there’s a lot of room for growth here. That’s part of why I’m doing this, running for president.”

*Changes in wording were made to clarify Gallegos’ involvement in the Black Lives Matter movement.