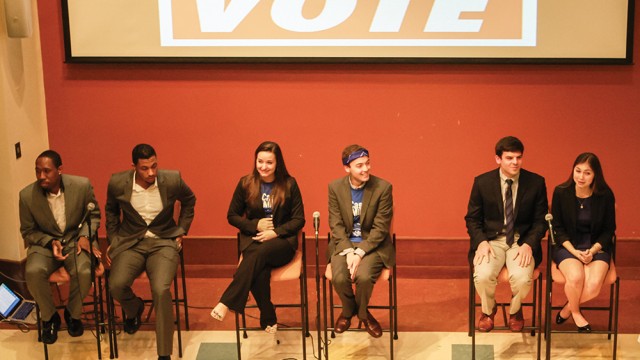 The teams presented abridged versions of their platforms, noting the key issues and overarching goals that their campaign seeks to address. The candidates also engaged in various friendly, competitive games, led by the Elections Committee—the energy in the room was palpable as supporters cheered on their candidates.

“There was great energy in all of their teams cheering them on, and a little competition here and there—but that’s healthy,” said Kiera Keller, co-chair of the Elections Committee and A&S ’15. “It’s much more of a friendly competition this year than it has been in the past, and they’ve gone about it with a great tone.”

The event closed with a straw poll that tested preliminary voter opinion by having members of the audience voting for their preferential candidates. Napoli and Hussey won the straw poll vote with 107 votes, followed by Gallegos and Keefe with 47 votes, and Kale and Altomari with 33 votes.

Cassidy Gallegos and Michael Keefe plan to present their teams as a collaborative front. In their campaign, they are emphasizing experience in leadership positions both in and out of UGBC, which they feel is important. The team’s slogan, “A breath of fresh air to UGBC,” exemplifies how they hope to run UGBC during their term.

“We want to bring UGBC out of Carney and into the quads and into the classrooms and really be relevant in students’ daily lives,” Keefe said.

Mental health is of particular interest to both candidates. About a year ago, Gallegos started the BC chapter of To Write Love On Her Arms, a club that aims to help those who are struggling with addiction, suicide, or depression. The pair hopes to continue the Be Conscious campaign as well as add new initiatives and events. For example, they want to implement QPR training (question, persuade, refer), which is a suicide prevention platform.

“Coming into BC, I was really taken aback by the lack of dialogue surrounding mental health on campus,” Gallegos said. “I think programs like What I Be that happened in the fall, we want to do that again this year and invite more students to participate.”

Second, the team will focus on the freshman experience. They hope to establish a low-key, conversation-based, University-wide mentorship program between freshmen and upperclassmen. They emphasized that there will not be an intense application process for this program. Whoever wants a mentor will be able to get one, according to their platform.

Gallegos and Keefe also pledge to address student life issues during their candidacy. High on their list of related goals is the implementation of printing resources on Lower Campus. They also want to create a student activities period during the school day—this would be a specific time in which the University would not schedule classes so that students could attend club meetings and club events, like speakers, panels, and forums.

If elected, Gallegos and Keefe will operate using a lot of outreach: they plan to implement comment boxes and online forums to gauge student opinions. They want to represent the student body, so their platform represents not just things that they are passionate about, but also things that other students have shared with them. If they cannot accomplish all of their goals immediately, they plan to get the ball rolling for future administrations, Gallegos said.

“So many of these things that we have as part of our platform have come from the students,” she said. “We’ve heard from hundreds of people that have wanted all these different things on campus and we’ve taken the things they care about and combined them with the issues that we know are important and prevalent and needed to be discussed and we created this platform.”

James Kale and Jose Altomari split their campaign platform into three levels of tasks. First, they will focus on realistic and attainable goals for the first semester of their tenure. Their second level of goals involves tasks that may take more time, but are still possible to accomplish during their tenure. Finally, the team will focus on achievements that are likely to happen, but may take more time past Kale and Altomari’s tenure.

Their first level of goals includes working with the Office of Student Involvement in order to produce a comprehensive calendar of events on campus. They also hope to create a mentorship program for transfer students and spring admits. In addition, Kale and Altomari would like to address student life issues, like making the Gold Pass more student friendly and petitioning for Hillside to return to the regular meal plan. They also plan to advocate for gender-neutral bathrooms to accommodate members of the LGBTQ community.

In their second level of goals, Kale and Altomari include efforts to raise awareness of sexual assault, mental health, LGBTQ, and AHANA concerns on campus. They also hope to revamp the way University counseling is set up because they are overwhelmed and understaffed, Altomari said.

“Over the course of your four years you undergo a lot of mental development and if you don’t have that kind of support … it could be detrimental to your own health,” Altomari said. “So we do want to undergo some kind of reform.”

Finally, in the third category, the team will address more overarching, institutional problems, like influencing the long-term direction of the University and working with the Career Center on how to be a better resource. They also want to establish programs for those students who struggle with the transition back to BC after going abroad.

Kale and Altomari plan to establish a meeting each month between presidents of registered student organizations (RSOs) to discuss campus climate. These meetings will be a way to ensure that each RSO is relevant on campus, Kale said.

“That’s a way to bring people together and to make sure all aspects of student culture are finally met,” Kale said.
The team’s slogan—“including U in UGBC”—underscores its platform’s alignment with student-centric goals. The candidates emphasized that every item on their platform comes from student concern. To gather information, they spoke with people and included a section on their ballot to gather ideas from the student body.

Unlike the other two teams running for the candidacy, neither Kale nor Altomari are members of UGBC.

“We will bring a new and different perspective to UGBC, especially the fact that we are so integrated with the student community,” Kale said. “We know what students actually expect, demand, and desire from their student government. There are so many things that we can go in there and definitely shake things up and change the way UGBC functions.”

Thomas Napoli and Olivia Hussey have divided their campaign platform into three overarching sections: advocating, uniting, and improving. Within each section, Napoli and Hussey have outlined specific goals, initiatives, and changes they seek to implement throughout their tenure.

The “advocating” division within their platform serves as a frame for the advocacy work that they seek to do on behalf of students to University administration, ranging from policy revisions to the institution of various programming.

As part this advocacy division, Napoli and Hussey hope to institute a cohesive Free Speech and Expression Policy in conjunction with another proposal that addresses physical changes to campus. With these initiatives, they expect to create an environment that is more conducive to activism and open dialogue in public areas on campus, like the academic quad.

The Free Speech and Expression Policy has been in development this past year as a part of the revisions made to the Student Guide—with Napoli spearheading this policy change, as the chairman of the Institutional Policy Review committee (IPR)—and is set to be voted on for the policy’s institution in the 2015-16 academic year.

The “uniting” division of their platform seeks to foster a collaborative environment between student organizations, and utilize organizational collaboration to create discussion on stigmatizes issues. This collaboration will be a way to explore intersectionality between many areas, such as race, gender, or LGBTQ issues.

“Olivia and I come from the perspective that you can’t just gloss over issues on campus and superficially mend the campus together,” Napoli said. “To really unite, you have to open dialogue about these stigmatized issues and then find a meaningful way to move forward by engaging the whole community.”

The stigmatized issues Napoli mentions include sexual assault and mental health. The candidates plan to enact a mental health awareness program that will inform students about how mental health affects every student, and train students to be active bystanders when dealing with mental health issues. At the start of the program, students will be able to apply to be trainers, but in the long term, Napoli and Hussey hope every student at the University will go through the training.

Third, the team hopes to improve how UGBC is perceived within the larger University community so that every student can see a clear change in the upcoming school year. Students should be able to easily understand what the student government does, Napoli said.

If Napoli and Hussey win, they plan to implement changes that will make substantial and tangible changes in the day-to-day quality of student life. For example, they want to appoint three to four juniors or seniors willing to advise freshmen and sophomores in their own major.

“We certainly were ambitious in a lot of points in this platform, but we think the way we handle that—not making promises that don’t plan on keeping—is in our action plan, just creating measures of success for determining how students will judge us,” Napoli said.

UGBC campaign election 2015 election2015update
Under Mogan, Next Stage Of Student Guide Update Begins
Proposals For Promotions BC Athletics Should Give Out At Games