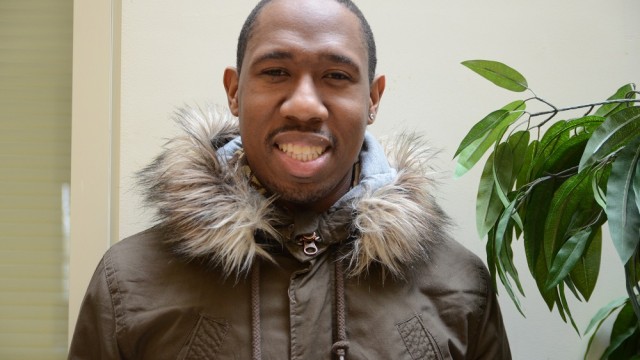 Inspired by recent campus protests, James Kale enters this month’s UGBC presidential election as the candidate with the least prior UGBC involvement.

Education played an important role in James Kale’s life growing up in the Bronx, N.Y. It was under the guidance of his high school teachers that Kale, a presidential candidate in the Undergraduate of Boston College (UGBC) elections and LSOE ’16, began to view teaching as a way to inform others of the problems of society. “They definitely heightened my sense of the importance of education and respect for it,” he said. “When you’re a teacher, you’re more than just a teacher. You’re a parent, you’re a sibling, you’re a counselor—it’s so encompassing of a role.”

Kale’s high school experience inspired him to enroll in the Lynch School, declare a major in applied psychology and human development and a minor in African and African diaspora studies, and actively seek positions at BC that related to student life. He now serves as chairman of the Martin Luther King, Jr. Memorial Gathering and co-director of Political and Social Activism for the Black Student Forum.

The current junior recounts several obstacles he’s encountered in his time at BC.

According to Kale, his unsatisfactory freshman experience left him voiceless and frustrated with what he considered an intimidating, unaccessible institution. “My freshman experience wasn’t that well-crafted,” he said. He felt that transition programs for freshmen that were meant to help students adjust to college life were not representative enough of the entire student body, with endless application processes restricting the number of students receiving crucial guidance that all new students need upon arrival to college. “And then you wonder why some freshmen fall through the cracks,” Kale said. He recalls considering as a freshman that he was not meant to be at BC.

The events of last semester were catalytic in Kale’s undergraduate career, inspiring him to run for office in UGBC this year. “The integration of campus [with] the ‘Black Lives Matter’ movement [made me realize] how we want more things on campus that supported students, that supported education, and that supported Jesuit ideals,” Kale said. “We wanted communication. We wanted things to be open, honest, and straightforward.” Kale decided that his concerns with the social atmosphere on campus could be expressed through teaching.

Following the deaths of Michael Brown in Ferguson, Mo. and Eric Garner in Staten Island, N.Y.—and the judicial responses to them in November and December, respectively—in solidarity with the disquiet throughout Boston and the nation, students and faculty participated in several on- and off-campus protests and staged a “Die-In” that took place in the newly renovated St. Mary’s on Dec. 9. As consequence, participants in the latter were initially told they would be subject to disciplinary sanction by the administration. Kale considered UGBC’s response insufficient throughout the entire ordeal, when it was meant to be the most prominent voice on campus. Additionally, throughout the protests surrounding racism, police brutality, and death, he considered the reaction from the University remiss and thoroughly inadequate. “I led movements as a student,” he said. “I was doing more as a student than the government was as a whole.”

Kale felt the time was right to run for a leadership position in UGBC and further student initiatives at BC, wanting to advocate for his fellow students and sympathizing with experiences, praises, and grievances similar to his own. “As a student, I like the fact that there are certain things that I can accomplish,” he said. He wants to apply his student experience to UGBC in the future, acting as a liaison between the University and its students and maintain a mutually beneficial, dynamic relationship as president.

Kale drew on his past experiences at BC to become a leader, and he urges students who are in a position similar to his to seek guidance as they continue their lives at BC. Additionally, he encourages the student body to take advantage of the spiritual, Jesuit atmosphere. “No one is used to college,” he said. “It’s a completely different ballgame, and I understand the struggle that comes along with it. There is someone here willing to help you and listen to you.”

The first level focuses on smaller campus inconveniences that still leave improvement to be desired. These include a more comprehensive campus events calendar, increased visibility of campus resources, and improvements to the Gold Pass.

The second level of proposed platform points focus on larger issues that may take longer to gain administrative approval. These include an increase in available printers on campus, the availability of Charlie cards for nursing and education students doing their clinicals and practicums, more dining options for vegetarian and vegan students, and improvements to the University core curriculum.

From the Bronx to the Heights, Kale draws on the importance of education to better inform others of the problems of today and create leaders who will find the answers for tomorrow. “A good leader is one who listens, understands, has a passion, and is willing to sacrifice,” Kale said. “Leaders must become a voice for all voices.”