Home » On Campus, A Discussion On The Keystone XL Pipeline 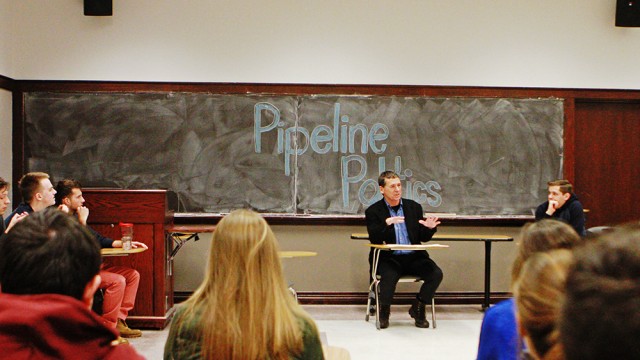 On Campus, A Discussion On The Keystone XL Pipeline

Originally proposed in 2008—and a topic of controversy ever since—the construction of a proposed Keystone XL extension of the Keystone Pipeline running between Canada and the United States has lately found its way back into the public eye. It was approved by the U.S. Senate last month and more recently by the House of Representatives Wednesday evening. Pipeline Politics: Keystone XL and American Energy Policy, a joint event hosted by the Eagle Political Society (EPS) and Boston College EcoPledge featuring professor of political science David Deese, brought the debate surrounding Keystone XL to campus on Tuesday. The talk provided a forum for discussion, examining questions of energy and the environment.

Before opening the conversation to a discussion-based question-and-answer session, Deese addressed a multitude of issues that the Keystone pipeline could possibly create, analyzing its construction as a logistical, commercial, and environmental issue. Citing a statistic that approximately one third of the United States’ net oil imports come from Canada, Deese stressed the importance of the trade relationship between the U.S. and Canada with regards to energy.

Deese made an effort to explain the complicated logistics which disincentivize fossil fuel commerce, and also noted the problems created by dependence upon fossil fuel as a source of energy.

“It’s not only environmental but it goes through some indigenous lands in Nebraska and it touches on these bigger issues of fossil fuels—do we want to rely more and more and more on fossil fuels?” Deese said. “No, all the countries’ energy policies around the world are really trying to diversify away from fossil fuels.”

Recent events also essential to the Keystone XL pipeline discussion included an agreement between the U.S. and China to combat climate change in which the U.S. promised deeper cuts in greenhouse gas emissions and China set a target for capping their emissions by the year 2030. Deese emphasized the importance of this agreement from an environmental standpoint and foreign relations point of view.

“Neither China nor the U.S., by far the two biggest greenhouse gas emitters, had committed to any sort of target,” Deese said. “Any commitment on the part of one country appeared to hinge on a commitment from the other country.”

After priming the audience with this background information, Deese opened up the floor to questions, most of which explored the explicit and implicit environmental impacts of both the project and the recent agreement between the U.S. and China. One major issue addressed by the audience and Deese was the feasibility of the new U.S.-China emissions agreement, and more importantly whether both sides would honor this agreement in light of the potential expansion of domestic energy production. Deese expressed uncertainty mixed with hopefulness on the part of the United States in honoring these commitments.

“The reliability or the predictability of the Chinese meeting their commitment is higher than that of the U.S.,” Deese said. “You’ve got a new president in two years cranking away in February of 2018 and it depends a lot on who it is. So certain steps that the U.S. takes I think will be locked in, and I hope and pray that the EPA rules on limiting big U.S. power plant emissions are actually going to go into effect as intended and stay there.”

This “Pipeline Politics” discussion, held an hour prior to a general meeting of Climate Justice @ BC, drew a large portion of its crowd from those active in the climate justice community. The discussion tended toward issues of climate change and conservation in both developing nations, those who lack the capital to seek alternative energy sources, and domestically.

Deese spoke about these domestic efforts, highlighting the imperativeness of striving toward an energy model which prioritizes conservation and efficiency in energy use. He also endorsed the use of technology such as electric vehicles and home insulation, among other technologies which the federal government can set standards in regulating.

“Conservation and efficiency are really the huge things that keep us from consuming more fossil fuels,” Deese said.

Deese concluded by speaking broadly about consumption culture in the U.S. and conservation efforts going forward.

“It’s a culture change—such as phasing in renewable energy, most of which is electric power generation,” Deese said. “It’s a narrower domain, but it is very promising.”