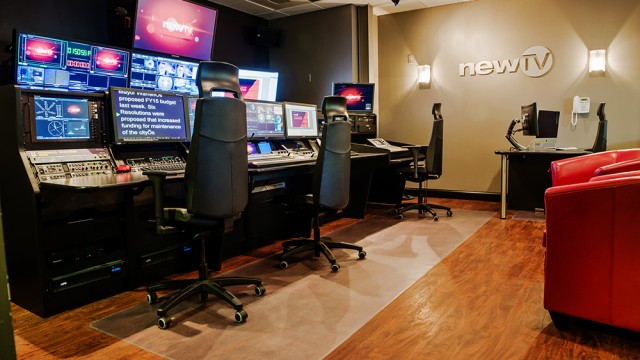 When Joe Garozzo was in middle school, he wished he had an outlet to share his passion in video production. Now, he is in a position to create one.

As Director of Educational Media at NewTV, Garozzo works closely with Newton public schools. He teaches classes in video production, airs student content, and films school events. He also produces shows in NewTV’s studio with students who are interested in video production.

NewTV is a non-profit community access center in Newton, Mass., “providing the diverse Newton community with a platform for opinions, news, and local information,” according to its mission statement.

“If you’re a Newton resident, you can come learn how to use the camera equipment,” Garozzo said. “We teach them how to use high definition cameras, all the editing software, filming and editing techniques.”

In his effort to further engage the Newton community, Garozzo has launched NewTV’s first Short Film Challenge. The competition is open to both high school and college students. It dares young filmmakers to show off their creative talents.

“I thought, ‘Well, I mean, if I couldn’t do [a video competition] when I was in high school, then, you know, why not run one?’” Garozzo said. “I just thought the idea would have been something I would’ve loved to do in school, and giving the kids an opportunity to do that kind of made it a reality for me.”

The weeklong competition runs from Feb. 15 to Feb. 22, beginning at this Monday’s Kickoff event where production teams will choose the genre of their film out of a hat.

Production teams can be as large or as small as the participant prefers. “If you want to do it by yourself, one person, or upwards to as many as you want—up to 10, 20—whatever a production team consists of is not really limited, as long as [they’re] in as one production team, then that’s fair game,” he said.

Participants are given a week to create a four-to-seven-minute film. Each production team is given the same character, prop, and line of dialogue that they must incorporate into the short film.

Despite the rules and requirements that shape the competition, the most challenging limitation around the contest, Garozzo said, is the time limit. “All of the creative process … will be happening in just seven days. All the writing, all the editing, all the acting, the production … the challenge is to make a short film in just a week,” he said.

At the end of the week, each video will be judged based on creativity, following of the guidelines, and originality. NewTV will screen the top three films at a private event in their studio. The three winning films will also be shown at Newton’s Festival of the Arts in May. The first place-winning production team will receive a GoPro camera as well.

According to Garozzo, the prize of the competition is the hands-on experience. “The whole production of it is benefitting them,” he said. “And if that’s something that they want to go into as a career, this could be a great stepping-stone to launch their passion—their hobby. So it can be anything from just a cool conversation topic to something they can put on their resume for future reference.”

Registration for the contest opened on Jan. 14 and will close on Feb. 14. As of now, three production teams have entered.

“As far as numbers go, I’m not quite concerned with the actual outcome of the numbers. I mean, if I get three groups or 30 groups … as long as kids are sparked by the idea of short films and production, then that’s pretty much my goal.”

NewTV’s mission is to create community and provide educational services for Newton residence. Garozzo believes this competition reflects that purpose. “I think a successful Challenge would be to have the kids feel confident in what they made, to give to us as like a competition piece,” he said. “I’m looking for that spark in the creative mind of the kids and to give the students a chance to show everybody in Newton what they can do.”

Through his Short Film Challenge, Garozzo hopes to send young filmmakers a message loud and clear: “You don’t have to go to Sundance to get recognized for a short film.”

television newton film
On Campus, A Discussion On The Keystone XL Pipeline
‘What Are Your Valentine’s Day Plans?’