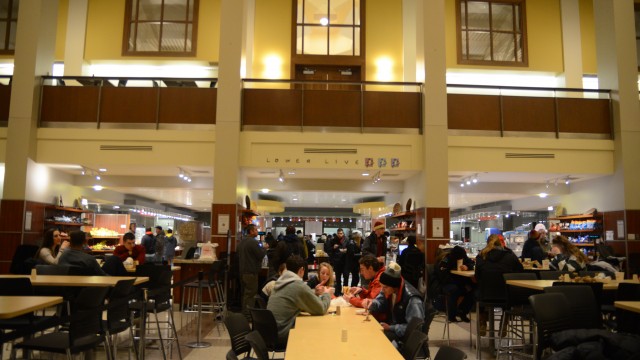 It is 8:20 p.m. on a weeknight, and across campus, dinner has officially ended 20 minutes ago. Students eagerly gather outside the blocked off entrances to the dining areas in Corcoran Commons, McElroy Commons, and Stuart Hall in anticipation of the opening of Late Night.

Behind the blocked off entrances and out of sight, however, is a very different scene. Students are packaging the excess food from the day—food that would otherwise have been thrown away—and sending it off in a refrigerated food truck to be taken to shelters and food kitchens across the Greater Boston area.

The Every Bite Counts (eBC) initiative was launched as an effort to address the amount of food that was wasted each night in the dining halls across campus. A similar organizational effort had before been instituted under the same name in 2011 by another group of students. It became inactive in 2013 due to a declined student interest.

In September of 2014, Lynn Petrella, Coordinator of Sustainability within the division of Student Initiatives in Undergraduate Government of Boston College (UGBC) and A&S ’17, approached administration from Dining Services with her idea of conserving and donating the dining halls’ unused food to those in need, an idea that aligned closely with the organizational goals previously instituted by the first iteration of Every Bite Counts. Petrella, along with the help of Johanna O’Day, A&S ’15, effectively took over the old Every Bite Counts, relaunching it as an initiative from UGBC in November. The new eBC’s relaunch brought with it the proper organizational and student leadership to make this initiative sustainable.

The initiative serves as a way to reduce and eliminate food waste and cultivate sustainability on campus through the donation of excess food. Each weeknight at 8 p.m., student volunteers repackage the surplus food from the dining halls into containers, which is then delivered throughout Boston.

Petrella’s idea for starting a school-wide initiative followed after taking notice of the wasted food in the dining halls, but the idea truly originated after her participation on a service trip in May of 2014, where she realized that many could benefit from this kind of service.

“I went on the Jamaica Service Trip and I saw very poor people who didn’t have food, and I knew that at BC we spend a lot of money, but a lot of it is put to waste,” Petrella said. “I was just thinking of the people when I was in Jamaica—they could be using that food—and I was sure that there are people in Boston with similar situations, who could also be using our food.”

Petrella noted the support of dining services since her initial proposal in September, in backing the idea and allocating the necessary resources to make the initiative’s refocus possible.

“We are delighted to support Every Bite Counts in their efforts to work with the BC Dining team and Lovin’ Spoonfuls to donate wholesome food that might otherwise be discarded to neighbors with need,” said Beth Emery, director of Dining Services, in an email. “Their mission has a positive impact on the community and prevents food waste which also supports our sustainability goals. Thank you to the student volunteers that have made this wonderful program possible.”

The eBC initiative partners with Lovin’ Spoonfuls, a Boston-based non-profit organization that allocates resources through food donors—grocery stores, produce wholesalers, farmers markets, and now universities—and uses a direct distribution method to pick up and distribute food to local organizations and meal centers within the same day. Lovin’ Spoonfuls picks up the containers of food that have already been packaged, dated, and weighed by students and takes it to various food centers. The partnership with Lovin’ Spoonfuls was facilitated after O’Day contacted the organization at the start of eBC.

“We facilitate the rescue and distribution of healthy, fresh food that would otherwise be discarded,” according to the organization’s website. “Lovin’ Spoonfuls works efficiently to deliver this food directly to the community organizations and resources where it can have the greatest impact.”

The initiative has already seen tangible results in the little time since its inception. At the close of first semester, several weeks after its creation in November, eBC had collected and donated approximately 450 trays of food, with a total of around 6,750 servings of food. The recovered food had been sent to New England Center for Homeless Veterans, CASPAR Emergency Services, and the Boston Rescue Mission. EBC has expanded to around 28 students, who currently volunteer once a week from Sunday to Thursday, at Corcoran Commons or McElroy Commons, with oversight at each location from O’Day and Petrella, respectively.

There are plans for expansion to Stuart Hall on Newton Campus—eBC currently lacks freshman volunteers at these location. The program is open to all, and eBC has seen strong participation from students involved in other sustainability-related student organizations, like Real Food BC and EcoPledge.

Since the start of the initiative, the total amount of food being conserved and repackaged each night has been reduced, as eBC has influenced the spending habits of Dining Services. In response to the issue of food excess, there has been a reduction in inventory. On the first day of eBC in November, there were 22 trays of food saved, with each tray containing around 18 portion sizes. EBC currently averages around 10-12 trays of food conserved each night, Petrella said.

“We’re getting less and less food which is good for Dining Services because they’re buying less food and producing less food,” Petrella said. “It’s good in both ways. Our purpose of giving it to people who need it is decreasing a little bit, but we’re helping Dining as well.”

EBC hopes to expand its program to other schools. So far, Petrella has contacted approximately 20 schools in the Greater Boston area in an effort to expand the initiative to a city-wide effort for sustainability.