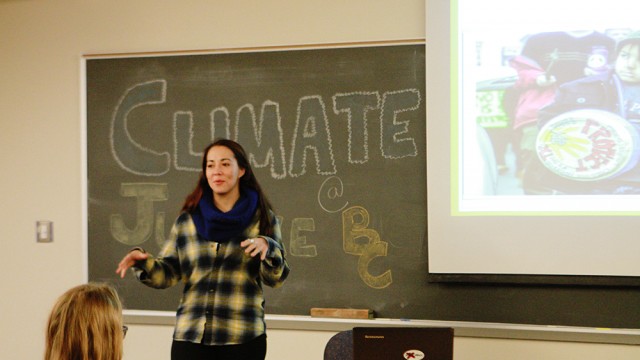 Tensions Rise In Debate Over Divestment

According to a Sept. 2013 New York Times report, it would take a global temperature increase of two degrees Celsius to cause drastic and irreparable climate changes. Around 2040, the report estimated the trillionth ton of fossil fuels will be burned, at which point companies will need to figure out a way to capture and store their carbon emissions to avoid going over the two-degree threshold.

Climate Justice at Boston College (CJBC), an unregistered student organization, has been attempting to convince the University’s administration to divest from fossil fuels. Currently, it is hoping to attract the support of other students and alumni who are unhappy with the University’s endowment’s being partially invested in fossil fuel companies. When describing its efforts, CJBC posits a positive correlation between fossil fuel consumption and rising temperatures.

CJBC has been active in the past by sending letters to John Kerry, various donors, and Pope Francis. It also notably protested at a Bank of America information session, questioning the bank’s involvement with fossil fuel companies. This semester, its coordinating team has planned an entire series of events that is headlined by a march to University President’s Rev. William P. Leahy, S.J., office on Friday, Feb. 13 that will end in a vigil.

“The vigil is kinda just a representative end to [the week’s activities] and that’s where we’re going to be doing a lot of the chants about breaking up with fossil fuels,” said Zack Muzdakis, A&S ’17. “We’re just showing Fr. Leahy that we’re still here, we’re still planning to push for divestment and even though we went over break, it’s not over.”

Organizations around the world are organizing similar events pushing for divestment on Feb. 13 and 14—known as Global Divestment Day—and CJBC has planned its march and vigil around those dates. They will read a Valentine’s Day themed letter about breaking up with fossil fuels during the vigil.

“If you’re doomsday with people about environmental stuff, they’ve heard that all before,” said Alyssa Florack, A&S ’17. “Everyone knows they’re supposed to recycle and they shouldn’t drive Hummers because it’s bad. We’re trying to do something more empowering … we’re trying to do more positive things, and the theme this week is breaking up with fossil fuels for Valentine’s Day.”

Muzdakis and Florack said that CJBC plans to host two to three informational sessions designed to educate the student body on the potential effects of climate change caused by fossil fuel consumption and carbon emissions. They are organizing another rally equivalent to Rights on the Heights in March that will be centered around free speech and will feature other groups on campus. In addition, they want to coordinate another event in April or May that will be more radical in nature, pending the University’s reaction to the vigil and the March event.

“Another thing about these bigger actions—the vigil, Rights on the Heights—it’s representing the urgency of the situation, it needs to be addressed,” Muzdakis said. “We can’t really sit back anymore, it’s an urgent issue.”

Florack said that loud and drastic actions are needed because CJBC considers the administration to be disinterested in having a dialogue with the group about divestment. Despite meetings with UGBC and Leahy, CJBC believes they have nothing to show for their efforts.

“They’ve already told us BC won’t divest, so it’s pretty useless to continue to cater to what they want us to do when what we’re doing is clearly in opposition to that,” Florack said.

CJBC is currently part of a city-wide initiative that has created a Multi-School Fossil Free Divestment Fund in collaboration with students at Tufts University, the Massachusetts Institute of Technology, and Northeastern University—among others—and Impact Assets, a firm that facilitates investments in socially conscious endeavors.

“The petitions we have are pretty worthless as far as the administration goes, they don’t really care about it,” Bobby Wengronowitz, GSAS ’19, said. “The next level is actually get involved and actually showing up for stuff, and there are a lot of people who have a hard time showing up to things—but they care a little bit and they might do something.”

The fund is designed so that people who are interested in donating to a specific university without having their money go toward fossil fuels can donate money through the fund, which will then freeze those assets until the end of 2017 or until the school divests. If the school has not divested by the end of 2017, the money gets donated to other participating schools that have divested. Currently, 17 people have pledged money to BC through the divestment fund, totalling approximately $500. The entire fund has a little over 50 total donors and is nearing $5,000, Wengronowitz said.

The Investment Club at Boston College is in charge of managing and investing a small portion of the University’s endowment, and currently has made no moves to divest.

It has recently invested in companies within the energy sector because of the recent drop in oil prices, Manas Sharma, one of the Investment Club’s executive board members and CSOM ’16, said in an email. These trades were made because the club believed it would offer a higher return as the stocks were undervalued, not because of any decision to divest, he said.

“The con of investing in oil and gas is that … these natural resources will one day run out,” Robert Graff, another executive board member and CSOM ’16, said in an email. “We have confidence that the companies we invest in will evolve with the changing resource levels and environmental needs of our country (and the planet); it is certainly possible that some of these firms will evolve in their role as energy providers to develop sustainable and environmentally friendly alternatives.”

Cambridge Associates, an area group that helps advise the University on the investment of its endowment, was unavailable to comment on divestment specifically in regard to BC due to their policy of not discussing individual clients. They do, however, fully support institutions that build their investment strategies around environmental or social missions, according to their website.

Florack said she is surprised that, as a Jesuit institution, BC is not taking a stronger stance on the issue of climate change, citing Pope Francis’ recent comments on the urgency of the matter. She said that BC can be a leader in Boston when it comes to divesting should they choose to do it now, but if other schools begin to divest, more pressure will be placed on the administration.

“Our club specifically is in a tough spot because we go to Boston College where, obviously, the administration is conservative,” Muzdakis said. “Even the student body to a general extent is a lot more conservative than other schools, so I think getting support from the overall student body is going to be difficult for us.”

Ultimately, Muzdakis believes that it will be up to the students to convince the University to divest.