Home » WZBC Programs: Beyond The Range Of Modern Music 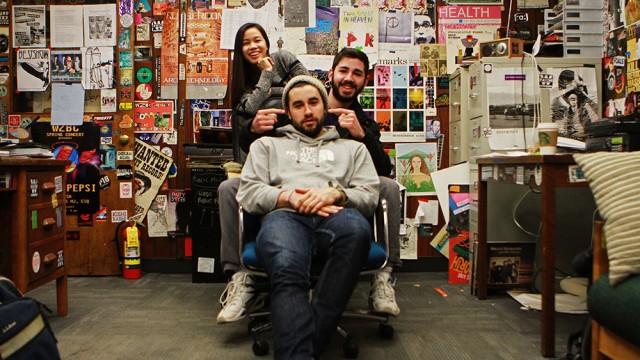 WZBC Programs: Beyond The Range Of Modern Music

WZBC prides itself in programs headed by an eclectic range of students—the Boston College radio station is open to programming from undergraduates of all class years if they live up to the station’s standards. One such freshman, Peyton Spencer, A&S ‘18, hosts her program ‘Music De Spencer’ on Thursdays from 2 to 3 p.m. Spencer gained a slot in the programing rather quickly, working with the station for only a semester.

“To have an FM program I had to do an AM show with WVBC,” Spencer said. “And I had to intern for the DJs of WZBC for a semester, they listened to my AM show to make sure I was doing fine and then I submitted an application saying what I would be playing.”

Spencer’s program is a part of the station’s alternative rock scene, which makes up a large section of the daily playlists and shows that the station promotes.

Like many of the DJ’s that make up the WZBC roster, for an hour a week Spencer creates a playlist of music she’s listening to and that she can find among the station’s selections of albums, artists, and songs.

“I try to make the playlists flow together, stylewise,” Spencer said. “Generally I play alternative rock music, but it kinda varies from featuring synthetic instruments to more folksy sounds. The first song I’ll play will be really electronic, the next will have a mix of synthetic instruments, and after that I’ll move on to the more folksy end of things, so that there is kind of a flow to the show.”

Spencer features bands HOLYCHILD and Roadkill Ghost Choir on her program, bands that may not be known by most, but are definitely picking up steam in the industry. She also will take recommendations from listeners who call in, like many of the other DJ’s at the station. Although Spencer tries to go into a show with a generally solid list of songs she wants to play, she often goes to the station’s playlist for help. Alternative rock is one of the station’s cornerstones.

Many of the DJ’s  shows are compiled from a WZBC playlist of CDs that the DJs listen to and make notes on like which tracks they preferred and which artists they find have a similar style to a selected album. It’s part of the station’s dynamic.

“We have a playlist of CDs that are similar sounding, where people write what style the music is on each CD, what songs they liked off the album, and what they especially liked about those songs, so in that sense it’s a nice collaboration,” Spencer said.

Alternative rock is not the only genre that makes up WZBC’s playlist. Reaching back to funk and soul from the ’60s and looking into the future of popular music, WZBC’s programing offers an escape from the typical hits and sound of today’s pop-music.

WZBC has a tight-knit group of music enthusiasts and their love for the music they play contributes to the substantive collection that is the WZBC playlist.

Along with the rock-oriented programming that WZBC airs throughout the day, the station reserves certain shows for showcasing more experimental niches of today’s music and even has a few hours set aside for national programs like “Democracy Now!” One of the more popular programs featured on WZBC, “Sunday Morning Country,” hosted by Country Kate, is a four hour program, comprised of what the station would argue is “real country.” This program is compiled from an array of country genres including Honky Tonk, Country Boogie, Swing, Tex-Mex, and Classic country music.

One of the bigger, most successful elements of WZBC is its NCP (No Commercial Potential) shows that experiment with very funky musical tastes. These NCP programs, such as “Abstract Terrain” and “Rare Frequencies,” venture to roam outside the borders of what is considered “modern music.” This type of music can only be bound by descriptions like speed core, power electronics, and industrial sound. Though this type of music might not be accessible to all, it speaks to WZBC’s mission.

WZBC features an impressive, diverse coalition of music-lovers from all different tastes and styles. The station’s DJ’s are evidently comfortable sharing their tastes and interests within WZBC and the many styles they bring to the table are extremely apparent in the station’s dynamic programming. From Country to WZBC’s NCP genre, there is a wide range of content for listeners tuning in.