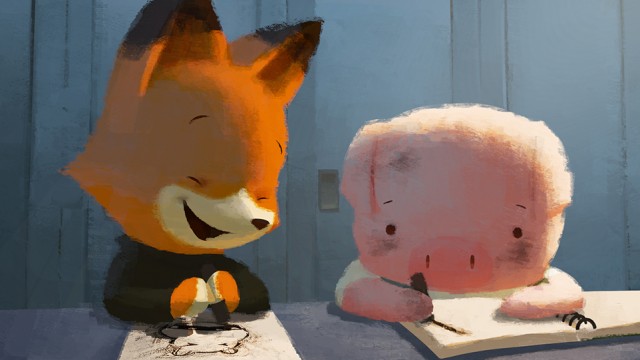 Need another reason to get off campus this weekend? Luckily, the arrival of the Oscar-nominated shorts is here and they are at Coolidge Corner. The showing comes in three parts—animated, live-action, and documentary—and theaters across the country are participating, as they concluded the animated portion this past Thursday and are now in the thick of the live-action mini-films.

These shorts films often go underappreciated, as they can be lost amidst all the Oscars’ feature film hype, but that doesn’t mean they are not deserving. With a smaller canvas comes greater risk and less room for mistakes, as well as a greater emphasis on what’s said and not said. This year’s films nominated for the Oscars in the animated category certainly didn’t disappoint, so here’s a glimpse into each of these creatively crafted nuggets:

“Me and My Moulton” started the show with a bittersweet account of growing up in mid-’60s Norway with slightly eccentric parents. Directed by Torill Kove, this short from the perspective of an ambivalent middle child raised by two modernist parents whose dining room chairs only had three legs—which led to a lot of accidents—runs through the woes and triumphs of what it means to be a family.

The next one, “Feast,” a six-minute short by new director Patrick Osborne and Walt Disney Animation Studios is the story of one man’s love life as seen through the eyes of his dog. With each bite of food passed from plate to dog bowl, the audience gets bite-sized glimpses into the start of a relationship, a breakup, and an eventual marriage and new addition to the family. Winston the dog even gets the pair back together after the initial breakup, and in the most adorably heroic way possible.

“The Bigger Picture,” a film by Daisy Jacobs and Christopher Hees from the United Kingdom, showcases dark humor and blunt reality in its rehashing of the tale of two brothers caring for an elderly parent. The two are at odds over what would be best—one wants to put their mother in a home, while the other refuses and begrudgingly tries to cope with a brother who “doesn’t do anything.” The short ends with a funeral and some peace between the two brothers, who decide that they better “get on,” showcasing the fact that life goes on despite loss.

In “A Single Life,” a two-minute short directed by Marieke Blaauw, Joris Oprins, and Job Roggeveen from The Netherlands, Pia is struck with the realization that her life is intricately connected with a vinyl someone leaves at her doorstep. As she skips around the record, she finds herself at various points in her life, from a young child, to a soon-to-be mother, to an elderly woman with a walker, to eventually … an urn.

The last short, entitled “The Dam Keeper” by Robert Kondo and Dice Tsutsumi, tells the tale of a young pig with a very important job—keeping a storm of smoke away from his little town by regularly running a windmill. While he works incessantly to protect his neighbors, the same can’t be said for himself, as his crocodile, hippo, and ostrich classmates harass him at school. Things seem dim until the arrival of a new classmate, Fox, changes everything and the pig no longer feels alone.

Following these five official selections are four “highly commended” films, some enjoyable bonus shorts selected by ShortsHD. These included “Sweet Cocoon,” the story of a caterpillar trying to undergo metamorphosis with one problem—her cocoon is much too small. Two other insects come to her aid and she turns into a beautiful butterfly. A beautiful butterfly who is almost immediately snatched up and eaten by a bird flying overhead—such is the cycle of life. The next one, “Footprints,” tells the tale of a gullible man who goes on a quest to find the horrifying monster who pecked a hole into his door, only to come to the realization that he had, himself, done it all along.

The next two, “Duet” and “Bus Story” are equally as charming. “Duet” shows how two individual life paths can lead into one another, culminating in a beautiful duet, and “Bus Story” shows how one woman’s dream of becoming a bus driver who gets to greet children and wave at their parents and wave at the birds and the bees and the passersby isn’t all that she thought it would be.

In short (pun intended), these little films are an absolute treat that provide a glimpse into the human experience all across the globe, in its similarities and slight differences. Each of these films is packed with funny anecdotes, universal truths, bittersweet revelations, all while being the perfect length to munch on the snacks and popcorn that viewers usually run out of mid-movie. Amidst these freezing temperatures, a cozy theater is the perfect place to be, and these films provide a perfect escape.