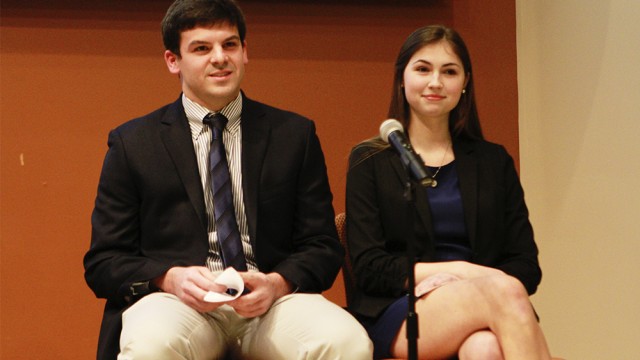 Each year, candidates for the Undergraduate Government of Boston College (UGBC) offer an extensive list of platform items, ranging from convincingly tangible to regrettably vague. But this coming year, expectations for the leadership of our student government extend beyond the proverbial promise of new printers. Last semester, a series of high profile protests—grounded in criticism of the University—shook the infrastructure of a sleepy institution that had, in many ways, lost sense of social justice beyond the abstract. The high-profile resignation of UGBC executive vice president Chris Marchese also raised questions of institutional reform—in that case, of BC’s conduct system.

Thomas Napoli, A&S ’16, and Olivia Hussey, A&S ’17, have demonstrated a strong commitment to working with administrators toward change of BC’s most contentious policies. As chairman of UGBC’s Institutional Policy Review committee, Napoli has actively sought the opinions of students and faculty, embodying a pragmatic style of leadership sometimes lacking in UGBC’s self-concerned politics. His collaborative style of work with the Office of the Dean of Students in rewriting BC’s student guide has been promising, especially considering last semester’s concern that administrators could be overpowering UGBC’s advocacy work. Hussey’s interest on improving campus climate on sexual assault and working with the Women’s Center similarly marks her as a reformer. Napoli and Hussey have proven themselves the right choice for UGBC president and executive vice president, respectively, in the 2015-16 academic year.

The merits of the other two teams should not be overlooked—this 2015 election is unusual that all three options, if elected, could sufficiently fill UGBC’s highest offices. The team of Cassidy Gallegos, LSOE ’16, and Michael Keefe, A&S ’16, showcases an impressive background both inside and outside the UGBC community, which adds credibility to its platform. While both have been UGBC senators—which has allowed them to form strong connections with members of the administration, especially in the Office of First Year Experience (FYE)—Gallegos has involved herself greatly in student initiatives relating to mental health and Keefe has spent the last year running EagleMUNC. Gallegos would be a fantastic leader in continuing the necessary reevaluation of campus attitudes on mental well-being.

Some central items of their platform, however, would likely prove problematic in execution, including their proposed freshman year mentoring program, in which all freshmen who apply would get paired with what would need to be massive pool of qualified upperclassman mentors. Their plan to block out a period during the day exclusively for student programming is similarly oversized in scale, and if enacted, could further exacerbate the scheduling conflicts student-athletes, PULSE volunteers, and nursing students have in picking classes around other commitments.

Coming from a background entirely apart from UGBC, the team of James Kale, II, LSOE ’16, and Jose Altomari, A&S ’16, has shown an exceptional effort in learning the ins and outs of the organization over the last few weeks. And more importantly, they’ve brought to the election an extensive list of concrete student concerns that should be addressed by UGBC regardless of the election outcome. Both candidates have a sense of small things that can be done to remove barriers that undergraduates encounter, with proposals including the creation of gender-neutral bathrooms and the expansion of dining options to be more inclusive to all students and respectful of the nuance of cultural dishes. Their platform is also directed toward larger monetary issues on campus—the Kale-Altomari proposal stresses the importance of giving prepaid Charlie Cards to those in the Lynch School of Education and Connell School of Nursing for their mandatory practicums and clinical trips into the city. One of the strongest points of the Kale-Altomari plan is a proposed increase in diversity of faculty, which would start with the hiring process and hope to eventually increase the feeling of inclusion among students of all backgrounds at BC.

In implementing many of these changes, however, their platform lacks concrete ideas for where much of their funding for initiatives like new printers and reduced prices for laundry would come from. The Kale-Altomari ticket falls short in that the steps required to execute their broadly-focused plan mostly have yet to be hashed out. They offer a range of valid critiques of the status quo, but do not organize their goals beyond classifications of attainability. While “easy,” “medium,” and “hard” are instructive in thinking of objectives, Kale and Altomari will need to win the support of others in UGBC to live up to their platform, which will be difficult if there is not a sense of continuity in their goals.

The Napoli-Hussey team’s 42-page platform offers detailed plans for implementing proposed policy goals—at the document’s forefront is a comprehensive free speech and expression policy. This proposal ambitiously suggests that the landscape of campus be redesigned physically to better allow for student activism. Napoli and Hussey hope this visible change will complement a more liberal, transparent policy on the approval of campus events, flier postings, and protests.

Napoli’s policy work on student rights over the last two semesters is the cornerstone of his team’s platform. Whether it is the rethinking of free expression or the student conduct system, this thread links together what otherwise might appear unrelated goals. Napoli and Hussey have taken extraordinary time to meet with students from organizations around campus, and in the process, they have aligned their agenda with the lived experiences of students from a range of backgrounds. Their proposals are also well-researched, benchmarked with successful policies and initiatives found in universities across the country. It is our hope that if elected, they will continue to look outward, and recognize the clear limitations of developing ideas within our student government. If executed well, the ambitious agenda set by Napoli and Hussey could solidify UGBC’s transition into a powerful student advocacy organization.

It is for these reasons that we enthusiastically endorse Napoli and Hussey.

UGBC election 2015
Love In The Time Of The BC Bomb Threat
Miami Vice: Canes Drop Eagles In Double Overtime