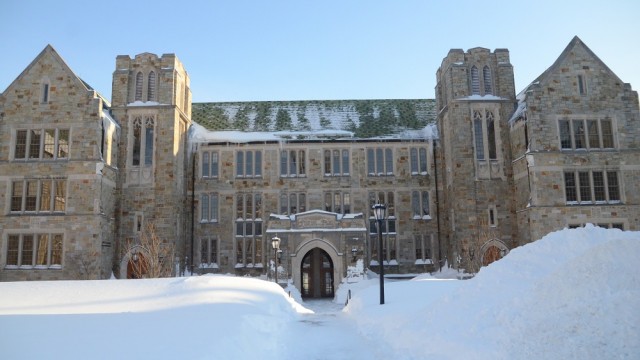 Carroll School Ranked No. 7 In Recruitment By Wall Street Oasis

Boston College’s Carroll School of Management is, it would seem, no stranger to external praise in recent years.

Most notably in 2014, Bloomberg Businessweek ranked CSOM in its top five undergraduate business schools in the country, placing the school at the position of number four—a two-spot improvement from the previous year and a substantial improvement from its ranking of 16th three years prior.
A ranking released earlier this month on the popular Banking and Finance community website WallStreetOasis.com (WSO) continues CSOM on this trajectory, placing the business school at the number seven spot on its list of “2014 WSO University Power Rankings: Top 50 Schools for Wall Street Recruiting.”

In a brief preamble to a large graphic listing these “Top 50” schools, WSO explained the metrics it employed in this ranking system.
WSO devised this numerical ranking by giving schools credit for being a “top school” for a particular bank or set of banks, explaining that it hoped to “give an idea of where the WSO members are getting interviews from … which gives us an idea of the recruiting trends of firms and what their top target schools list looks like.”

Built upon data points collected from users who have submitted “Interview Insights” to the WSO company database, these rankings compile relative percentages of interviews granted to students at certain universities in comparison to other top universities.

In the fine print, WSO includes a disclaimer that “the percentage of actual interviews granted at each school are much lower in reality, but we wanted to easily highlight the relative strength in recruiting at just the top 50 schools.This does not mean that going to one of the top schools makes recruiting for Wall St. much easier.”

Coming from a forum-based website like WallStreetOasis.com, this recent distinction differs slightly from rankings from Bloomberg Businessweek and other similar publications.

Entirely user-generated, WSO’s assessment of matters such as these implies a level of recognition on the part of a wider and more socially active financial community.

“It’s a very popular location for people to post articles, to conduct surveys—it’s a great forum for people who are working on Wall Street, or looking to learn more about Wall Street,” said Louis Gaglini, the associate director of Employment Relations and Recruiting at the Career Center in regards to WallStreetOasis.com. “I would say to any student that anytime you see something like this, where folks are actively engaged in an industry, to pay attention to it—gather information the way you think you need it. There’s never any one strict, go-to source.”

Gaglini spoke about this recent ranking and rankings in general as somewhat of a barometer for progress.

He said, though at times flattering, rankings deserve a certain level of scrutiny as far as credibility is concerned, given that the takeaway from rankings such as these can be rather subjective.

“There are a lot of rankings out there and everyone can interpret them as they wish—I’ll never suggest to someone how they should interpret a ranking,” Gaglini said. “What I will say to folks is that if they’re curious about it, explore it—find out the basis of it, ask questions about it, find out the sample that is used.”

The nature of this ranking is also unique in its specificity to recruitment for highly competitive positions, speaking to many of the strengths of BC as a community, both professionally and personally.

“The root of any survey that would reflect well on Boston College, the basis of that is on our students,” Gaglini said. “That is what will drive our success going forward. Boston College alumni are very important to our success.”

Pivotal to success of this nature, Gaglini cited the role of BC’s large and growing “Career Community.”

“It’s a rather simple equation,” he said. “As alumni I think BC alumni want Boston College students to be successful, they’re going to support the efforts we make, they have a certain affinity to the university that others just don’t have.”

In remarking on recent successes of CSOM as far as rankings and ordinal assessments are concerned, Gaglini offered praise to some of the less outspoken programs at BC and commented on the highly public nature of rankings in the business world and among business schools.

“The nursing industry and the healthcare industry, they’ll do their types of rankings,” Gaglini said. “Education and even nonprofits—they’ll do their surveys as well. You just hear a lot more about the ones that happen in the financial world—they’re more prolific, they’re more frequent and they get published more often.”

2 COMMENTS ON THIS POST To “Carroll School Ranked No. 7 In Recruitment By Wall Street Oasis”