Home » Confessions Of A Chopped-aholic 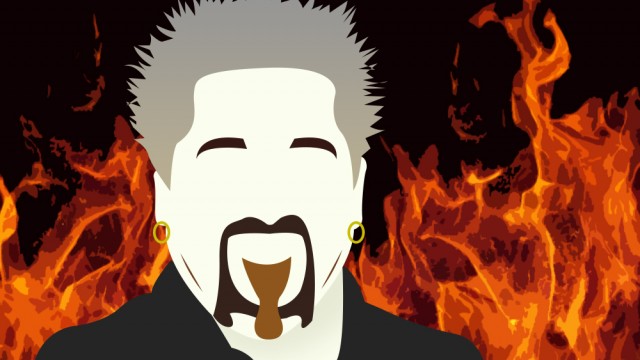 I didn’t grow up watching Tommy, Chuckie, and Angelica, but instead with Paula, Emeril, and Giada. In middle school I clicked channels past The Hills and America’s Next Top Model, to happily settle in for 30 minutes with the Barefoot Contessa. I remember my thrill over the poorly dubbed original Iron Chef episodes, a smaller and more excited version of myself blissfully exchanging cartoons for The Food Network.

Beyond the excessive amount of hours I have spent watching it, The Food Network has always maintained a particular role in my life, it being the only channel number I have memorized on both my mom and dad’s TVs. I am thoroughly convinced that Alton Brown’s chocolate chip cookie recipe was responsible for my good grades in high school (yes, I was that person who left baked goods in the English department) and the highlight of my third grade was when I got to meet Iron Chef Morimoto after he did an event in D.C. Rachael Ray’s 30-Minute Meals made up the most of my dinners throughout grade school—that is, until my mom became a vegan, which is a topic for another column entirely. The Food Network is my Sopranos, my Breaking Bad, my Mad Men.

Between re-reading Moby Dick, frolicking around the city in search of Metro content, sipping Pumpkin Spice lattes, and all of my other responsibilities, I have little time to catch up on my favorite TV content. There is a possibility, however, that I may be able to find my Food Network favorites elsewhere. Mario Batali, the red-headed teddy-bear of an Italian Iron Chef, is rumored to be opening one of his specialty food stores in The Hub. A brainchild of Batali, Eataly is half Italian Whole Foods, half cozy North End restaurant with a touch of Otto’s and a splash of Wegman’s Beer and Wine section. The slice of Italy already has two U.S. locations, one in New York and another in Chicago, and, according to Boston Restaurant Talk and the ponytailed-chef’s twitter, is very close to acquiring a Boston location.

More impending than Batali’s Mecca of all things Italian, his first Boston restaurant, Babbo Pizzeria, is set to open doors in the Seaport in April. Though there are few things not to love about an orange Croc-wearing Italian Chef, in terms of Food Network personalities, I think that Boston could have done better. It’s nothing personal, as Batali would probably rank as one of the top five Food Network chefs that would be most fun to hang out with, but we already have the North End—how much more pasta and cannolis can a city withstand? In wake of Batali’s move to the Seaport and my self-proclaimed Food Network expertise, here are some Chefs that I think would fare better with a Beantown restaurant.

Paula Deen – Because Boston needs some more butter. Have you seen those marathon runners? The city, ranked third healthiest in the U.S. by Forbes, could stand to gain a few extra pounds. Also the southern charmer survived being hit in the head with a ham, so she could definitely handle anything Boston has to throw her way.

Bobby Flay – Because I am tired of my Californian and Texan friends complaining about New England Tex-Mex. Also, I think everyone can agree that you would much rather taste Bobby’s burgers than Batali’s baked ziti (feel free to take that how you will).

Guy Fieri – I honestly don’t even know if he can cook because most of his shows consist of him driving around in a red convertible and screaming things like, “We’re riding the bus to flavortown!” But I do know that his bleached hair and signature flame shirt would bring Boston a good time.

Giada De Laurentiis – Sorry Batali, if Boston is going to go Italian, we might as well go for the Queen of Italian cuisine. She might annoyingly over-pronounce Italian cheese names, but she looks good doing it.