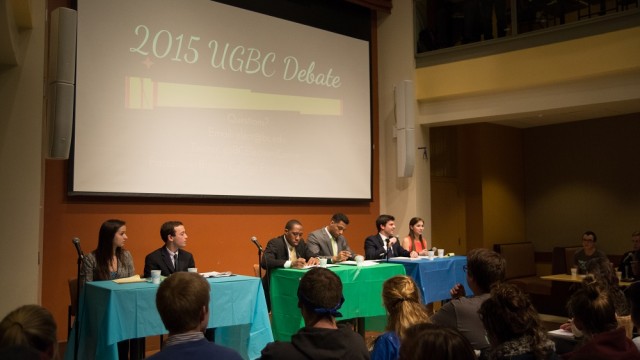 The three candidate teams running for president and executive vice president (EVP) positions in the Undergraduate Government of Boston College (UGBC) participated in a debate on Wednesday night in the Vanderslice Cabaret Room. The discussion centered on contentious campus issues and each team’s platform points. Hosted and organized by the Elections Committee, the event spanned nearly two hours and included questions from a variety of student groups directly related to UGBC’s advocacy efforts.

The structure of the debate gave the Elections Committee roughly half an hour at the outset to ask questions that would be answered by all three teams. The next half hour was devoted to questions from representatives of Diversity and Inclusion, including the AHANA Leadership Council (ALC) and the GLBTQ Leadership Council (GLC).

After this hour of questioning, all were allowed a two-minute rebuttal in which they could clarify existing points or expand upon aspects that had not yet been discussed. The final portion of the debate allowed audience members to submit questions to the Elections Committee either through OrgSync or on paper at the debate, after which each team ended with a one-minute statement.

To begin, the three candidate teams of James Kale, LSOE ’16, and Jose Altomari, A&S ’16; Cassidy Gallegos, LSOE ’16, and Michael Keefe, A&S ’16; and Thomas Napoli, A&S ’16 and Olivia Hussey, A&S ’17, each took turns answering the Election Committee’s questions—generally on issues that have either commonly arisen during UGBC presidential elections and those that are integral to the job of the president and EVP.

At times, each candidate team tied its answers to specific EC questions back to the larger themes of its platforms.

On the subject of tobacco’s place on BC’s campus, Napoli pointed to each student’s right to a safe and healthy campus environment to combat converse arguments about students’ right to smoke, indicating that he would pursue a tobacco-free agenda. Similarly, in a discussion on campus diversity, Napoli and Hussey suggested policy changes such as the hiring of a vice president of diversity that must accompany important dialogues on campus as necessary steps to fully unlock students’ ability to fully express their voices on campus.

In response to questions about binge drinking on campus, Gallegos and Keefe tied the push to promote healthier practices to their broader platform focus on mental health.

“A lot of the things we’re talking about tonight are so interconnected,” Gallegos said. “Many statistics show that [binge drinking] is prevalent here at BC … we have a lot of tangible steps in place that might not make binge drinking end in one year, but will try to make sure students are taking care of themselves both mentally and physically.”

Conversely, Kale and Altomari’s response to the same question centered on initiatives that UGBC can pursue to better educate students on safe uses of alcohol, while Napoli and Hussey pointed to a toxic environment between students and the Dean of Students (DOS) due to the number of write-ups at BC and administrative handling of their cases. Both teams also plan on pushing programs, if elected, that would give students more options on weekend nights than what is currently commonplace in the BC community.

When prompted with the question of whether the teams were inheriting a broken or flawed UGBC that was in need of repair, each duo provided different perspectives on UGBC as they vie for its top office.

“I don’t think there is a need for Olivia and I to restore or renew UGBC,” Napoli said, focusing on using UGBC’s current foundations to broaden its reach and interact with the student body in more meaningful ways. “What we need to do is go back to basics and focus on this idea that UGBC is here for this sole idea of serving you … if we really focus on what matters, we can become that premier advocacy body.”

Opposing Napoli’s statement, Gallegos argued that UGBC is, in fact, a broken and flawed body that needs the reform she and Keefe hope to bring to office. Citing the organization’s current negative connotation on campus, she keyed in on the need for greater transparency in all respects.

Kale and Altomari, offering their view as the candidates who have been least involved with UGBC over the past few years, emphasized that they view it as a developing organization, and that they want to be a part of that development.

The candidate teams then took turns discussing more specific issues posed by representatives from Diversity and Inclusion as well as the audience, such as homophobia on campus, AHANA students, and the role of ALC on campus, the University’s response to the die-in protests on campus in December, and potential policies to serve students with disabilities on campus.

In closing, Kale and Altomari emphasized their push as newcomers to UGBC to maintain their focus on the University community at large and make sure the organization acts as an effective advocate to foster students’ voices on campus.

Napoli and Hussey made note of two final points—their heavily benchmarked and researched platform, as well as the diversity of experiences he and Hussey bring to the table.

Gallegos and Keefe ended by keying in on their past track record of creating change on campus, as well as their ability to work within and outside of UGBC to push their platform points if they win.

Voting on UGBC president and EVP can be done online through Orgsync. It is currently underway and will conclude Friday, February 20th at 6 p.m.

UGBC
Confessions Of A Chopped-aholic
Carroll School Ranked No. 7 In Recruitment By Wall Street Oasis