Whirlwind Of Emotions For Eagles And River Hawks In Tie

“I thought it was a tale of two cities.”

Eagerness: Michael Louria heads to the box—two minutes for tripping Ian McCoshen at 2:40. A golden opportunity for the Eagles, as they planned to strike hard on netminder Kevin Boyle.

Heartbreak: Adam Chapie races down the ice for the River Hawks. He sends a last minute pass over to Joe Gambardella, waiting on Boston College goalie Thatcher Demko’s right. A shorthanded goal and a 2-1 lead.

Elation: Under a half a minute later, Adam Gilmour rockets the puck off the faceoff to Noah Hanifin. The freshman dished it to Ian McCoshen across the ice, who skated forward briefly before sending an absolute bullet pinging off the back of the net past Boyle. The fans go wild.

Frustration: Despite the momentum, the Eagles had trouble driving any shots past the stout University of Massachusetts-Lowell goalie Boyle, forcing the game into overtime.

The No. 10 Eagles (18-10-3, 11-6-3 Hockey East) and the No. 16 River Hawks (17-10-5, 10-7-3 Hockey East) rode this roller coaster of emotions all night long. Each needed this game badly in perhaps the biggest one for both sides this season. A win not only put BC or UMass Lowell in the driver’s seat for the second seed (and a first-round bye) in the Hockey East Tournament, but also would give either team a badly needed boost in the Pairwise Rankings.

Unfortunately, neither team came away satisfied as the two finished in a 2-2 draw.

A lot certainly went right for the Eagles in this one, starting with the tenacity of their offense. BC came out hot, capitalizing on a pretty sequence by the team’s youngest stars. Alex Tuch fired back a pass from the goal line right to Hanifin. He rifled the puck towards Boyle which, after a revision by the official scorers, looked to be tipped in by Gilmour. With those two shots—this and on McCoshen’s rocket—Hanifin effectively set up both goals for the Eagles, giving the BC forwards excellent opportunities to drive the puck into the net.

But his performance on the offensive side shouldn’t come as a surprise. The young defenseman has showed his ability in front of the other team’s blue line throughout this season, with these shots being his 15th and 16th assists of the year. Additionally, Hanifin danced around defenders all night, setting up more shots for his forwards, while taking a couple of his own throughout the game.

In fact, the entire Eagles defensive corps stepped up on Friday. McCoshen continued his fiery streak by adding his third goal in two games. As far as actual defensive work, team captain Michael Matheson looked at his absolute best. Throughout the game, Matheson came up with huge plays when BC needed them most. His strongest play came with about 10 minutes left in the third period. The Eagles had to fend off another UMass Lowell power play, and after a deflection that pulled Demko forward, his left side remained wide open. A UML forward received the puck with a clear angle, but Matheson sacrificed his body to force the shot up in the area and safely away from the net.

Matheson has faced criticism this year for his declined play—much of it a completely fair assessment. Many expected the defenseman to make the proverbial jump to that next level of play his junior year as the team’s most prominent veteran presence. No one, however, can deny that BC’s captain showed flashes of his brilliant talent Friday night.

Most impressive was Matheson’s passion on the ice, one that spread throughout the Eagles. BC has garnered a reputation as a highly physical team, which has often led to many penalties. That showed in a positive way against the River Hawks. Throughout the game, especially in the latter half, BC applied heavy pressure on UMass Lowell players, forcing tough shots if any at all. Whether the Eagles simply felt the weight of needing a win on their shoulders, or if they were playing hard for the team’s seven seniors in their final regular season game at Kelley Rink doesn’t matter—the fire showed in a way it hasn’t at times this season.

And yet for all the passion, BC has nothing to show for it. For each thrilling pass, the Eagles missed getting off a shot. For each strong defensive play, a silly miscue leading to a power play shortly followed. The lack of consistency that has plagued the Eagles all season came back to bite them, as they simply couldn’t find a way to finish.

“It was like two different games for both teams,” BC coach Jerry York said. “[UMass Lowell] get[s] style points in the first half, but we really picked it up in the third and OT.”

And he’s right. The Eagles’ pressure came throughout the game. Without an ability to finish, however, the result comes up this way—an opportunity that could have been. With a win against UMass Lowell, BC could have wrapped up the second slot in Hockey East, securing that first-round bye and perhaps making the next week easier on them.

Instead, this draw makes the road to the NCAA Tournament a little harder. The Eagles do still have a one-game lead on UMass Lowell in the Hockey East standings. Friday’s tie, however, denies the Eagles a victory in the tiebreak with UMass Lowell. Per Hockey East’s tiebreak rules, a win put BC ahead by virtue of its 1-1 record against Boston University compared to UMass Lowell’s 0-2 record, but this tie gives the River Hawks the advantage by having a 1-0-1 record over BC. Additionally, the game dropped them two spots to 12th place in the Pairwise Rankings. If not most troublesome, each team has two in-conference games to play. While UMass Lowell gets two home games against Vermont, the Eagles must fly to South Bend, Ind. to play Notre Dame. Mathematically, BC has an advantage: if the Eagles come away with the same or a better record at ND than UMass Lowell does against Vermont, then they still finish on top. On the other hand, if the Eagles lose more games to ND than UMass Lowell does to Vermont, the pressure will be on in the Hockey East Tournament to convince voters to put BC in the tournament.

After the game, Matheson didn’t seem too worried. “It’s a really tight race in Hockey East, it always seems to come to the last two, three games of the year,” the captain said. “That’s why teams love playing in a conference like Hockey East.”

But considering their prime position to clinch their spot, there’s only one emotion the Eagles should feel now. 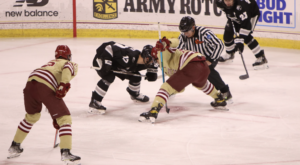