Home » BC Comes Away Consolation Kings In Beanpot Over Harvard 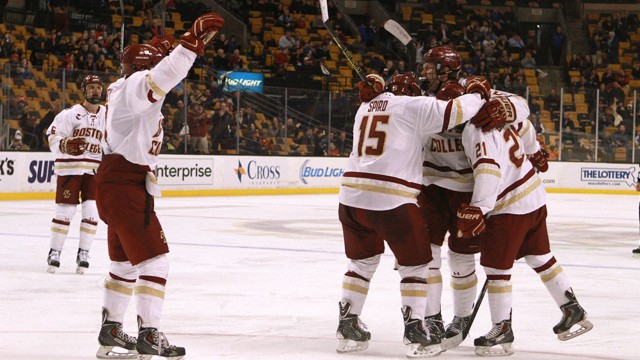 BC Comes Away Consolation Kings In Beanpot Over Harvard

Jerry York walks into the postgame presser, a sly smile creeping across his face.

He looks like Fiddle Kid probably does when he sneaks a five spot from his mother’s purse: fully knowing he got away with a crime without an apologetic bone in his body. As he climbs the short ladder leading up to the microphones, he notices he accidentally sat down at the wrong placard. Instead of his name, this one reads the name of his savior for the day’s game: Boston College forward Ryan Fitzgerald. Rather than perform an awkward ole around his sophomore scorer, York chuckles and sits down in front of the mic.

“I’m okay with being Fitzy,” the longtime BC coach said.

He’s certainly the man to be right now for the men’s hockey team. Without him, the hockey faithful may have rioted by the time the BC bus returned to Chestnut Hill. Instead, the Eagles sneak out the backdoor of the TD Garden, laughing all the way down Commonwealth Avenue.

But it wasn’t that easy—the Eagles had plenty of problems against the Crimson, none of them unique to this game. Penalties and prolonged scoring droughts plagued BC for a large part of the matchup.

As was the case in their overtime loss to Vermont, the Eagles had a lot of difficulty finding an offensive rhythm in the game, especially in the second period. After taking a 1-0 lead on Alex Tuch’s rather easy goal in the first period, capitalizing on a penalty by Harvard’s Jimmy Vesey, BC lost all of its mojo. The Eagles managed a mere two shots on goal in the period, compared to 15 by the Crimson. It’s not as if Harvard’s defense overwhelmed York’s team. BC could not execute on any of its passes, barely getting off any attempted shots. That’s not to say there weren’t any prime opportunities. The Eagles couldn’t even manage a shot during a 5-on-3 chance early in the second.

But York blamed the penalties as the reason for his team’s pitiful offensive performance. The Eagles played with a man down for 14 minutes, 10 of which were in the second alone. “I thought we’d have the penalty situation sorted out by now,” York said. “It’s too late in the year to be talking about discipline and penalties.”

While the Eagles’ defense played a huge role in keeping them in the game despite all the penalties, much of the credit must go to goaltender Thatcher Demko. Harvard bombarded the sophomore goalie with shots, mostly when having a man advantage over the Eagles. Nevertheless, Demko only allowed two goals in the second before settling down following the penalty parade and shutting out the Crimson for the remainder of the game. His efforts helped the Eagles push the game to overtime—Matthew Gaudreau scored the equalizer off a deflection from a hard snipe by swingman Teddy Doherty.

“He’s a key to our club,” York said of his netminder. “For all the penalties we took, he was called upon to make some really excellent saves.”

Once the game reached the extra period, the Crimson didn’t even get off a shot. On the other end, the Eagles battered Harvard goalie Steve Michalek with several shots before a little bit of puck luck went their way. Austin Cangelosi won the faceoff, sending the puck to the top of the offensive zone for a waiting Ian McCoshen. BC’s bruiser then passed it onto Destry Straight, who made a nice pass to Fitzgerald waiting for the point on Michalek’s right. His first shot clanged off the post before rebounding perfectly to his stick for the game-winner.

And although Fitzgerald himself noted his personal scoring droughts, some of which lasted over a month, York still praised his forward’s ability to come up when it matters most. “Ryan has always had big game tendencies,” the BC coach said.

That doesn’t mean that the Eagles didn’t sit on the edge of their bench. Although the Screaming Eagles’ Pep Band—otherwise known as the entirety of the BC student section in the largely empty TD Garden—started playing “For Boston” and the BC Alma Mater, the referees went to the replay. According to Fitzgerald, they were checking to see if Michalek had knocked the net off its bearings.

And as York recalled that moment, that sly smile appeared again on his face.