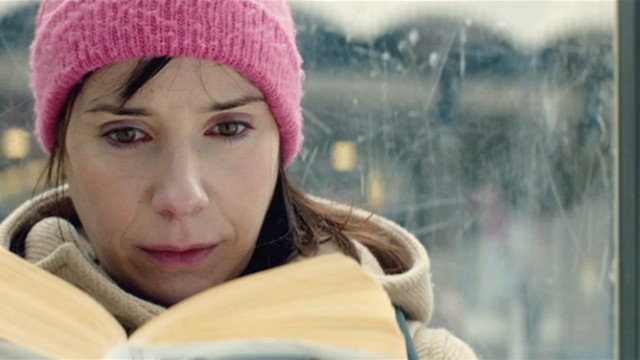 The 2015 Oscar-nominated shorts continue their run at Coolidge Corner Theater with some amazing live-action narratives. What makes this category so unique is that it represents the Oscar’s least American batch of nominees to be found outside the foreign-language race, allowing the audience to get a taste of some of the countries that are rarely represented at the multiplex. Although there were five shorts this year, there are two really exceptional ones that deserve to be commended throughout this entire space: a 40-minute short hailing from Israel named “Aya” and a short half its length from England named “The Phone Call.”

“Aya,” a mostly English short co-directed by Oded Binnun and Mihal Brezis’ explores the question of “what if?” What if we were supposed to meet? While waiting for her husband to return at the airport, Aya (Sarah Adler) reluctantly agrees to hold a chauffeur’s sign while he runs out to move his car. When the passenger (Danish actor Ulrich Thomsen) arrives before his real driver returns and assumes that Aya is his driver, she impulsively decides to go with it, and drives him to Jerusalem. As the rest of the narrative unfolds, the audience watches their relationship progress from strangers to something like genuine affection.

This beautifully understated film explores the sort of possibilities inhibited by social conventions—Aya momentarily sets aside her life to make a new (romantic?) connection with a stranger. The film explores the makings of a connection, and how much of a factor being in the right place at the right time plays. Was it by chance that Aya decided to drive this stranger, an act of fate, or rather a break in rationality? Was it the fact that they found themselves in a scenario that they wouldn’t normally find themselves in—in a car for hours with nothing to do but talk—that created intimacy? After she drops him off, Aya returns to her family, leaving that “what if” unanswered and coming back to her senses.

If the cast of “Aya” sounds impressive, Sally Hawkins and Jim Broadbent in “The Phone Call” will blow your mind. Mat Kirby and James Lucas casted Hawkins to play a volunteer helpline counselor who regularly helps those in distress. One day, she gets a call from a lonely old man who, at first, is at a loss for words. The only thing he seems to be able to get out are the words “I’m scared” and “Joan.” After quite a few attempts, he finally begins to reveal what’s bothering him—his wife, Joan, had passed away two years ago from breast cancer and life just wasn’t worth it without her. As they continue to talk and the conversation gets increasingly personal, Hawkins realizes that the caller has taken a lot of pills and, as the clock ticks by, she tries to avert the crisis.

The sheer anguish of this encounter plays out on Hawkin’s face as she realizes that she is at a loss and the old man’s life begins to slip away. Eventually, he stops responding and the camera cuts to his apartment. The caller, Broadbent, is never seen, but his wife is seen coming through the front door with groceries. She calls out his name and he shouts from the other room, “Joan, honey, where have you been?” and she replies, “Looking for you.” And if, at this moment, you are not choking on your own tears, well then it’s probable you don’t have a soul.

What made these two films really extraordinary was that they highlighted certain truths about human connection through scenarios that we don’t normally see. Two strangers forced into a situation together through an act that seems reckless and, frankly, crazy reveal an innate human desire for intimacy, and two more strangers faced with the reality of death reveal what relationships mean to a life.