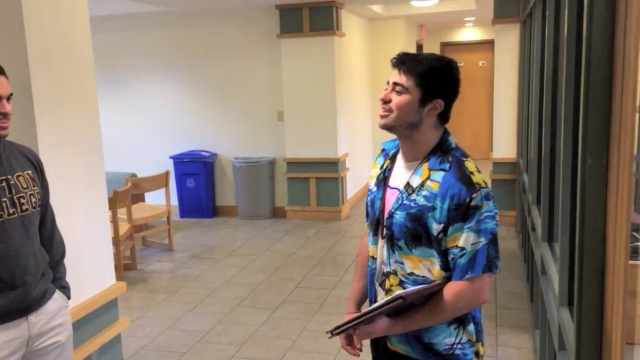 Boston College students now have the opportunity to showcase their living space in BC’s version of MTV Cribs. The Student Programming Committee (SPC), a subset of the Residence Hall Association (RHA), is hosting the second annual BC Cribs now through March 31st.

“My roommate came up with the idea last year,” said Henry Bolo, co-vice president of SPC and CSOM ’16. “Each BC room has its own character and personality and he thought it would be a cool way to see how everyone sets up their room. We were also trying to do as many events and initiatives that would digitally engage students, and Cribs fit the criterion perfectly.”

In the competition’s first year there were eight video submissions. But RHA is hoping to get more this year.

“Last year was a huge hit,” said Nancy Au, SPC co-vice president and CSOM ’15. “We created a Facebook page … so that people could solely access the Cribs videos and it got over 600 likes on the page by the time it was over, which was awesome.”

To be eligible for a shot at the 500 dollar cash prize, a contestant’s video must be about five minutes and should give a tour of his or her room. The contestant can then submit the video to RHA, and it will then be posted on the BC Cribs Facebook page.

Whichever video gets the most likes wins the competition.

Last year, the prize was split between two teams. The money for the prize comes from RHA’s budget, Bolo said.
The winning room last year was from 90 St. Thomas More Rd. In the video, the six BC students who live there give a tour of their two bedroom, one bath suite. The video closely mimics an episode of MTV Cribs. In the video, Kevin Slocum, CSOM ’16, raves about the apartment’s wooden table, as well as its view of a slice of Commonwealth Ave.

The videos would allow students an insight into the rooms they could potentially have in the coming years, Au said.

“With BC housing, some people go in blind choosing whatever residence hall they heard was the place to be,” she said. “So BC Cribs gives people a taste of what it could be like living in Walsh, in 90, or even on Newton. BC also becomes your home away from home. These residence halls, apartments, and houses become extensions of who BC students are. It’s a great way for people to get to know their fellow students and how they live.”

The competition brings the BC community together—it is something that everyone can talk about, Au said. She said her favorite was the first video submitted, from Walsh 323.

In this video, the BC students joke about how they “won the lottery” in getting an eight man in Walsh. The guys boast about the rooms features—a shower, a toilet, two chairs, two chairs, two lamps, and a sink to not do the dishes.

“The bar was set high last year, but the SPC team is working their butts off to make this year even better,” Bolo said. “I dare anyone to watch any of the videos and not laugh once.”