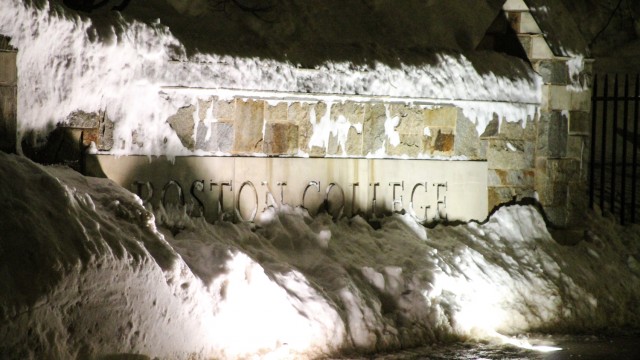 Woah, sounds like a convergence of cabin fever and spring fever if I’ve ever heard one. And I’m not referring to a really neat cabin. Like, we’re talking the hotbed of all things structurally catastrophic right now: Edmond’s. Yeah, Edmond’s fever. Barring the chance that we have another cancelled day of class before Friday—I dunno, Fr. Leahy, I’m seeing some flurries in the weekly forecast—these five days present ample opportunity to shake things up a bit before the whirlwind that is Spring Break. And let’s be real, given all of the time you and those missing ceiling tiles have spent pent-up in Walsh, you claustrophobes need some fresh air—or at least novel ideas. Brain freeze gotcha dumbfounded? That’s fine; I’ll do the ’storming. Just don’t hold my Corinanity against me, okay? Cool. Let’s get to it, then.

1) Take a walk around the Res

No, I’m serious. Jack Frost gets a super bad rap—he’s actually a pretty chill guy, if you get to know him well enough. Sure, he’s been kinda clingy lately, but what can the guy do, this is his time to shine. And you can’t deny the fact that you’ve got him to thank for those seven Instagrams—and modest combined total of 1,400 likes, it’s whatever. But c’mon, it should be beautiful this time of year, all that snow. This week is practically balmy—take a look at Wednesday. Thirty-seven degrees and snowing? And there’s a 30 percent chance it’s already snowing? Count me in. Get your swimsuits out, kids; Spring Break’s coming two days early.

2) Go to the Museum of Fine Arts

You’re probably wondering, but no, I did not get paid to endorse the MFA. But I’m not insinuating that I’d turn down any Jacksons that come my way. It will, however, get you out of your dorm and into the real—sometimes pretentious—world. So, get your snob on (I like art, I swear!) and head downtown. Wander aimlessly, pretend to be a professionally trained docent, or do homework in the cafe. Or don’t. It’s your free will so you can cry if you want to, or something like that. Best part? It’s free with your Boston College ID.

It’s getting to that point when you need to spice things up in your relationship, you know? Kindle the roomie fire. I’m not saying use real matches, but I’m not saying don’t use them, either. Just kidding, but be creative. He or she will love you for it eventually, anyway. (Patent-pending ideas include, but are not limited to: submerge his or her stapler in Jell-O; forge a ResLife sanction notice; incrementally increase the weight of his or her headset with change and gradually take coins out each day; convince him or her that he or she disclosed a horrifying secret to you while asleep; replace all of his or her writing instruments with crayons, the list goes on. Michael!)

Yes, I know, you’ve gotten this far, and Social Darwinism stipulates a survival of the fittest philosophy. But you’ve gotta fall back. You have a family, after all. And brain cells. I hear you need some of those.

Rocks aren’t just for jocks these days. Did you know that Central Rock Gym and MetroRock Climbing Center not only have open climbing hours, but also beginner classes? Oh, I didn’t. It’s a gneiss workout, too. So, get out there, climb to new heights just outside the BC Heights. Rocks rock, am I right?

6) Write for The Heights

Never want to read this foolishness again? I’m right there with you. Haha. No, seriously. I beg of you.

‘Appa’ Volunteers Grow In Number And Regional Focus
Caffeine On Campus: A Look At Coffee Suppliers’ Role Within BC Dining