Big Sean has somehow become a pseudo-rapstar without actually rapping beyond a basis level of competence. He’s never released a critically acclaimed or top selling album. Until the moderate mainstream success of “I Don’t F—k With You,” he’d never had a hit single. People who pay some attention to popular music, and especially those who consider themselves members of the hip hop scene, have definitely heard of Big Sean. How has Big Sean become a rapstar? He’s done it through proximity.

He’s got a smooth casual tone, a casual arrogance. He’s the guy you call if you’re Fall Out Boy or Miley Cyrus and need an hip-hop splash somewhere in your album, because every hit song has to have a couple vague rap bars, right? He just lingers, and he does it again in Dark Sky Paradise, where his songs here hover around four minutes—about a minute and a half too long.

His third studio album, Dark Sky Paradise is a modern rap album with bubbling synths and an impressive guest list. It’s got Drake, Kanye, Chris Brown, Jhene Aiko, and a couple guys you’ve never heard of before. And like most modern rap albums, it’s mostly uneven. And the fault ultimately lies on Big Sean’s narrow shoulders.

In the first track “Dark Sky (Skyscrapers),” Big Sean sets the trajectory of the album. Dark Sky Paradise is about his rise to the top and the pitfalls of proximity to the top. Original right? He asserts “I don’t owe nobody in the world no favors,” which well, isn’t exactly true, because Kanye West discovered Big Sean and has produced each of his three albums.

In the grand tree (or clique, or great chain of being) of rap, Big Sean is branched under Kanye. In the Big Sean mythology, he apparently got his record contract by freestyling in front of Kanye at a Detroit radio station. As J. Cole to Jay-Z, Big Sean is to Kanye—down to the uproariously famous girlfriend (Ariana Grande).

Aside from some of the inconsistencies in his self-presentation, Big Sean has his moments in arguably his most ambitious album to date. “I Don’t F—k With You” is a rightful hit with an abrasive sounding hook and pretty abrasive content. Big Sean gives into raw emotion in his lyrics and it rightfully shows in the form of the track. It’s him at his cruelest and nearly best. Even his ponderous moments here don’t seem as forced as they typically do. He says, “I guess drama makes for the best content / Everything got a bad side, even a conscience / Now you’re drinkin’ ’til you’re unconscious.” From Big Sean, that’s some deep stuff.

On the general topic of “depth,” you have to take the good Big Sean with the bad Big Sean. “Deep” featuring Lil Wayne is a whole lot of telling without much showing. The refrain constantly hits us over the head with “this s—t deep,” without ever delving into deep topics. Big Sean can be fun, but depth isn’t really his wheelhouse. And don’t try to argue, as he does, that looking up the sky and wondering if you’d fall or learn how to fly counts as a deep thought. That’s just silly.

On Dark Sky Paradise, Big Sean plays to the level of his competition. When Lil Wayne is in the house, he goes down to that level. When Kanye or Drake is in the house, the product is actually pretty good. “All Your Fault” featuring Kanye sets a lilting production to Sunday morning drive flow from Big Sean. In “Blessed,” he nearly matches Drake bar for bar. And in “One Man Can Change the World,” Kanye and John Legend join Big Sean in one of the smoothest, maybe even best R&B, songs so far this year. And it’s Big Sean who leads the charge here. Kanye and John Legend join in on some of the choruses, but Big Sean provides the heart—his delivery comes off as earnest, not cocky.

Big Sean is best when sped up or slowed down. He’s best when surrounded by really good artists. He’s not a rapstar, as much as he acts like one. 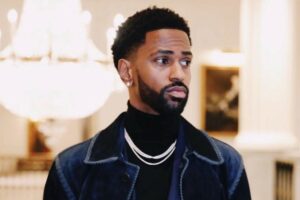