Home » Dropping The House On ‘Two And A Half Men’ 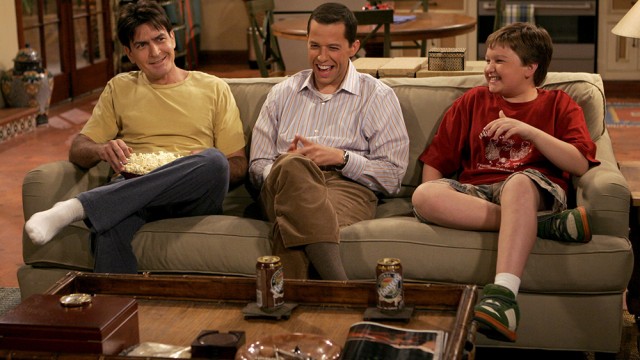 Dropping The House On ‘Two And A Half Men’

The long-overrun CBS series Two and a Half Men came to a pitiful and stunning close last Thursday. The show, which ran for around 12 years, lived on way past its prime, probably due to its ludicrous and vain creator/producer, Chuck Lorre.

The show’s plot took a really strange turn when Charlie Sheen was forced out due to his drug habits, talk show outbursts, and generally tumultuous relationship with Lorre (I’ll get to him in a minute). Ashton Kutcher was oddly introduced as a strange tech enthusiast who had struck it rich and moved into Charlie Harper’s Malibu beach house, dealing with Alan Harper’s antics for another couple years before the show closed.

Sheen’s departure from the show was rather publicized and it was widely presumed that the show would just end with his absence as the rating in its eighth season dropped, but it went on, despite cringe worthy critical reception.

Appropriately, the show ended this year, but in a fashion I don’t believe anyone expected and not in a way long running fans deserved to see it come to a close. Sheen’s character was killed off after he left the show, but the series finale does away with this notion, making it so Charlie was never really dead, just kidnapped by a crazed lover. The entirety of the episode is spent berating Sheen and poking fun at the show’s own unnecessary longevity and weak writing. It makes for a poor and self-deprecating note to end a show on, and the last two minutes prove to be some of the most heinous moments I’ve ever seen on television.

The final scene of the program features a faceless Charlie walking up to his old home, knocking on the door, and then being crushed by a piano that fell from a helicopter that Jon Cryer and Ashton Kutcher’s characters had noticed in the previous scene. It gets more atrocious. The camera pulls back to reveal the façade of the house being in a studio, where series producer Chuck Lorre is sitting in his director’s chair. Lorre then proceeds to turn around, look in the camera, say Sheen’s famous catchphrase, “Winning,” and then also be crushed by a falling piano. Canned laughter encompasses the entire scene and it cuts to black from the last shot of the two broken pianos.

Chuck Lorre has, for me, just been the name that pops up under Executive Producer at the end of his shows on CBS. He produced Two and a Half Men and still works on Mike & Molly and The Big Bang Theory. Even with more renowned producers like Vince Gilligan, whose name comes up after each episode of Breaking Bad, one rarely hears much about television visionaries behind the scenes.

Lorre, on the other hand, leaves “vanity cards” at the end of every program he produces. Some episodes, these cards just discuss the production of the episode. On others they delve deep into Lorre’s unapologetic political views. CBS has often censored these vanity cards for their partisan content or just plain crude language.

The mixture of these cards and Lorre’s decisions with the last episode of his “hit” television series make him one of the most vain, self-appreciated personalities television has to offer. If I still watched the show regularly, the ending would have outraged me. Instead, I’m more puzzled why the network executives and his colleagues would go along with the madness. What did his fans do to deserve him acting out a scene of personal angst, spite, or whatever that was as the last scene to their beloved show?

Apparently, Lorre and the other producers actually asked Sheen to be in the last episode to give a speech about drug abuse in the end and be crushed by a piano, but he understandably declined to participate. Whatever Sheen’s personal battles are, Lorre does not deserve to reassert their troubled past in an “attempt” to celebrate the end of the program that they built together. Sheen may be a drug addled lunatic, but that is none of Lorre’s business and it is not fair of him to have such a disgraceful mockery of the man on national television.

Two and a Half Men needed to end a long time ago. After Sheen left, the show felt miserably clunky and everyone except Jon Cryer looks like they gave up on trying to make a quality program years ago. It is sickening to think of how much money anyone made from one of the trashiest hours of television that I have ever laid eyes on.

charlie sheen CBS ashton kutcher
MisterWives Weds Spunk And Sentiment In ‘Our Own House’
The Sandwich Method: Taking The Last Bite Of ‘Parks and Rec’