Home » The Sandwich Method: Taking The Last Bite Of ‘Parks and Rec’ 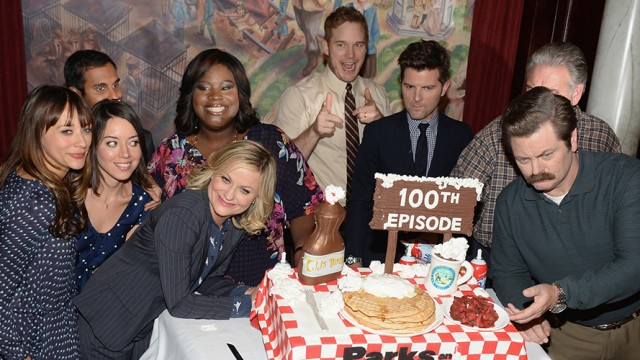 The Sandwich Method: Taking The Last Bite Of ‘Parks and Rec’

Parks and Rec is how I like my friends, food, and politics–simple.

I have a precise method for watching television—the sandwich method. It’s emblematic of three things I’m fond of—television, sandwiches, and self-imposed doctrines through which I can impose some sort of form on my life.

Basically, it states that you should watch shows throughout the day like you structure a sandwich. You start with bread and lettuce—a clean sitcom like Happy Endings. You move onto meat, maybe some honey baked ham or Game of Thrones, and finally cap it off with another slice of bread and some spicy mustard or a caper like Entourage or New Girl.

This is all indicative that maybe I’ve spent a bit too much time alone. But in a more optimistic light, television shows are some of my better friends. And no show has been a better friend (and no show makes for a better bread/lettuce combo) than Parks and Recreation. The show has always been endearing, but it wasn’t always that good, until it became great, because honestly, waffles are a lot better than sandwiches.

If NBC’s legendary late 2000s comedy Thursday night was a group of buddies at the local high school, Parks and Rec probably would have sat at the end of the lunch table. The Office was the guy with the cool older brother who knew all the dirty jokes and teachers, before joining a frat at the state school. Community was the cool nerd a little off the hinge who took a gap year to write for The Daily Show before flaming out and actually enrolling in a community college. 30 Rock was the editor of the school paper who’d go onto to Columbia and fall so deeply in love with itself it starts a new self-love movement in Brooklyn. Parks and Rec, though, that good hearted kid, would get better. It’d cut those creepy bangs and grow a fashionable beard. It’ll end up being the best man in 13 weddings.

Losing Parks and Rec is like losing a dear friend. If you burn through a show that’s already aged—like Friends, the end isn’t as sad, because you’re on your own for the most part. Parks and Rec didn’t just leave me or you. It left us. In the span of one frame it left all of our lives at the same time.

Parks and Rec is how I like my friends, food, and politics. Simple. Not Andy Dwyer simple, Knope or Swanson simple. The world and its folk are insane, and all you can do is make it better. That’s not something I’d usually say, but Parks and Rec has made a believer out of me.

I’d make the case that simplicity in art is its own form of complication. Don’t The Beatles somehow sound simple and complex at the same time? Doesn’t Shakespeare on stage Parks and Rec is was like that. Its cast of characters seemed one dimensional, but those dimensions ran bone deep. It’s also, aside from Donna and Jerry, the only show to ever boast a cast of B-list stars, though Chris Pratt hankering for A-list belt.

Watching a television show venture beyond the void, and go wherever they go after death, hurts. But I have to believe that somewhere up there Leslie Knope is calling the attention of the Equality for Sitcoms Committee, that April Ludgate has never been happier, and that Lil’ Sebastion is up with them. I hope they have waffles in horsey heaven.